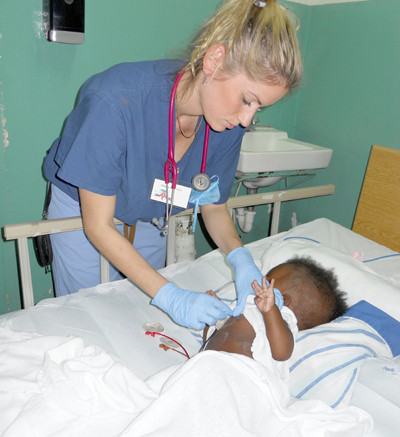 The first time Kerry Halleran went to Haiti, it was on a cruise ship.

“That part of the island was for tourists. Everything is parasailing and banana boats,” Halleran said. “You get off the boat, you walk around the beach a little and you get back on the boat.”

The second time Halleran went to Haiti, she worked 14 hour shifts in the makeshift intensive care units that held those left broken and suffering after the country’s devastating earthquake.

“It’s very hard for me to just watch people suffer, especially people who can’t help themselves. The country was so devastated to begin with and the situation has just overwhelmed them,” she said. “Like the rest of the world I kind of watched everything unravel on the TV and I really felt compelled to go down and help.”

But unlike most people who watched the devastation after the Jan. 12 earthquake and wished they could help, she was in a position to do something.

Halloren went to Holy Cross School in DeWitt, graduated from Christian Brothers Academy in 2003 and earned a degree in nursing from Villanova in 2007. Now she is working at Memorial Sloan-Kettering Cancer Center in New York City as an Intensive Care Unit (ICU) nurse and is completing a graduate degree in nurse anaesthesia at Columbia University.

She said she had always been interested in going on a mission trip, but understandably, she didn’t always have the time. Last month, Halleran had a week off for her spring break, and she decided that was the time to go.

She contacted the Crudem Foundation, which runs the HÔpital Sacré Couer in the town of Milot. Halleran called the foundation and offered her help, saying she was an experienced ICU nurse. “And they said, ‘When can you leave?’”

The HÔpital Sacré Couer usually has 73 beds, but because the hospitals in Port-au-Prince were destroyed in the earthquake, this hospital, located 75 miles from the capital city, has become a hub for the treatment of patients who are air-lifted in.

“There are five big army tents with 100 beds in each and the cots are just filled with patients with amputations and crushed spinal cords,” Halleran said. “It was just people of all ages and, you know, what made it hard was that there were just not enough people and not enough supplies.”

Equipment or supplies that were available one day might not be the next. “All the supplies and equipment and everything was donated. You never knew what you were going to get,” Halleran said. “We did our best. You kind of just learned to get creative for the day.”

Although Halleran volunteered to work in the ICU, she wanted to put her experience in anaesthesia to work as well. Before her shift from 2 p.m. to 10 p.m. each day started, she came in to work from 8 a.m. as an operating room nurse.

Meals were made available three times daily, but the flow of patients was so steady that Halleran often relied on a box of granola bars she happened to throw in her suitcase.

She said much of her time was spent in patient care, tending wounds, helping people adapt to amputations and helping people get out of bed for the first time since the earthquake.

With so many patients and medical staff from different countries coming in and leaving, a major hurdle the medical staff faced was keeping track of the patients’ history of treatment.

“One of the things that’s so nice about our health care system in America is that you have continuity of care,” she said. “Down there, especially with the situation there right now, it’s kind of just fly-by-the-seat-of-your-pants. Whoever took care of you before has hopefully set in place some sort of plan of care.”

Some patients carry manilla envelopes with some of their previous treatment documented on sheets of paper inside.

The situation is compounded by the very real probability that the previous doctor may have written the treatment plan in Creole, the national language of Haiti. Halleran said there were unit assistants available to help organize charts and translate whenever possible.

Halleran said she went to Haiti not knowing what to expect, but she was able to rely on her ability to adapt to situations she finds herself thrown into.

“I work in a cancer hospital, and the things I see on a day-to-day basis, it is very sad, but these are two totally different scenarios,” she said.

One of the most difficult things for her was seeing the devastating poverty in the country. “It was just such a culture shock. It was hard to believe the way of life there is just so primitive,” she said. “I was left just feeling blessed for the little things that we have like running water and electricity and a place to get food when you’re hungry.”

Despite the poverty and suffering she saw, Halleran said she was surprised at how the week in Haiti left her feeling.

“You know, I’ve always gone on vacation to a beach or on a cruise, and there I worked 16-hour days, seven days straight, and when I got home I’ve never felt more peace of mind,” she said. “It sounds cliché, but it was the best thing I’ve ever done in my life.”