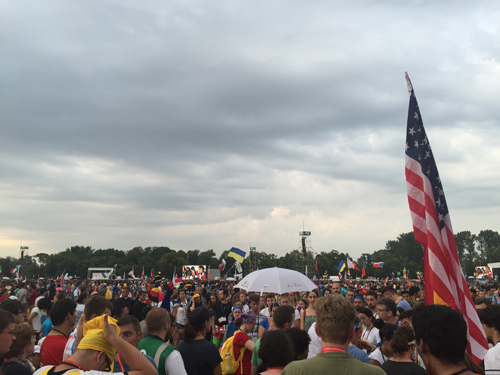 A group of 45 pilgrims led by the diocesan Office of Youth and Young Adult Ministry is in Poland for World Youth Day 2016. Pilgrim Samantha Pare is sending daily dispatches from the trip — read them below and be sure to check back regularly for updates!

On Tuesday we left our hotel in the morning to visit the John Paul II Center. The walls inside displayed massive floor-to-ceiling mosaics of scripture. We also saw a relic of St. John Paul II (his blood), and the garb he wore when he was shot.

From the center, we walked a path to the Divine Mercy Sanctuary just over the hill. On our way we all prayed the chaplet of Divine Mercy.

That afternoon, we journeyed to Blonia Park for opening Mass. There was a multitude of people covering the entire open space! After Mass the youth and even the chaperones joined in on some dancing with people from other countries! On our walk home we met people from so many different countries and places. The youth traded American flags and buttons and small trinkets with anyone willing to swap.

The amount of participants in WYD keeps getting larger and larger as the week progresses! The youth are excited and optimistic for the days to come. And for the Holy Father’s arrival!

This morning our group departed for Auschwitz I. Our bus drive was quiet. We broke into our small groups to discuss what we would be encountering for the day. Everyone was quiet and silent as we walked through.

After Auschwitz I, we departed for Auschwitz II-Birkenau for another walking tour. Again, the youth were silent and respectful.

After Auschwitz I and II we traveled to Wadowice, which is birthplace of St. John Paul II. We ventured into the church adjacent to his family home. We walked around the town square where we bought Kremówka [a Polish cake that was a favorite of St. John Paul II] to eat and share.

From Wadowice, we hopped back into the bus and made our way to the Divine Mercy Sanctuary for some sight seeing and a Mass celebrated by Cardinal Sean O’Malley; Bishop Cunningham and Father Joe O’Connor were also celebrants in the Mass!

We ended the day with a group dinner overlooking the beautiful city of Kraków.

Day 2 in Poland was a success! We left the Warsaw NovoHotel at 9:30 this morning to depart for Częstochowa. There we stopped at the Jasna Gora Monastery, which is home to the famous Black Madonna icon. We celebrated an English-speaking Mass in the chapel which houses the Black Madonna. The crowds were enormous! [See photos below.]

Chris Stefanick rode with us to Jasna Gora and asked that the youth and young adults bring any intentions they had before the Blessed Mother and entrust them to her care. He said this was a very powerful place and also invited youth to make a special consecration to Our Lady.

From Jasna Gora we left to travel to our hotel in Kraków, which will be our home for the next week! We arrived at the Columbus Hotel in Kraków around 7 p.m. and broke into small groups to look around for a place to eat and explore. After dinner, we joined together on the hotel patio for a group meeting and to say our Chaplet of Divine Mercy for the Year of Mercy. The youth were excited and optimistic for the days ahead, but looked forward to getting a good night’s rest!

Arrived in Warsaw around 1:20 p.m. (Poland time). Boarded our bus about 2:45ish for our hotel in Warsaw. Upon arrival at the hotel, the youth and adult leaders led us in the Chaplet of Divine Mercy while we waited for check-in. Youth and adults were jet lagged, but the excitement of celebrating World Youth Day and being in another country kept their exhaustion at bay.

After check-in we boarded our buses to attend youth rally and outdoor BBQ with fellow USA pilgrims. The host was Chris Stefanick. After dinner we gathered in a huge room to hear Stefanick speak and get us all pumped up for WYD 2016. We ended the night with adoration and confessions in the church next door. [See photos of the chapel below.]

In the chapel where pilgrims attended adoration and confession (photo courtesy Samantha Pare).

In the chapel where pilgrims attended adoration and confession (photo courtesy Samantha Pare).