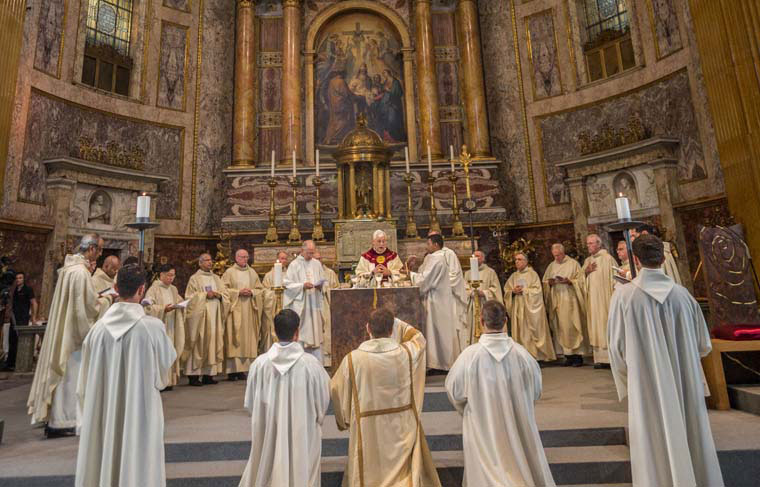 The October 14 election of Father Arturo Sosa Abascal as superior general of the Society of Jesus means the Jesuits at Le Moyne College have a new boss.

The worldwide men’s religious community – including the 17 who teach and minister at Le Moyne – will learn more about Father Sosa’s influence as he appoints provincials and Jesuit rectors, according to Father John Bucki, rector of Le Moyne’s Jesuit Community. The broad themes Father Sosa hopes to encourage will come in documents created by the General Congregation in Rome, which runs through November, he added.

But the election of the first non-European superior general – Father Sosa is from Venezuela – provides a hint. “They say this is a really good guy, he’s really holy, he’s in sync with Pope Francis,” Father Bucki said. “He has an international perspective, which is really important.”

Father Sosa, 67, succeeds Father Adolfo Nicolas, 80, who had asked to resign because of his age. Father Sosa was born in Caracas, joined the Jesuits in 1966, and was ordained in 1977, according to gc36.org, a website about the General Congregation.

Father Pedro Arrupe, the superior general at the time Father Sosa joined the Jesuits, is credited with the Jesuits’ commitment to addressing the needs of the poor. Father Arrupe is associated with the sometimes controversial liberation theology, which critics described as a Marxist interpretation of the Gospel.

“Someone like Arturo would be deeply influenced by these changes,” Father Bucki said. “Formation was changing. The depth of theology was changing. There was a broader international vision. He’s a product of all that.”

Father Sosa has a doctorate in political science and served as provincial superior of the Jesuits in Venezuela from 1996 to 2004, an era marked with corruption, social unrest, and growing poverty.

“He had to work with the Jesuits, who were divided over the [former President Hugo] Chávez government,” Father Bucki said. “He had to negotiate that and figure out how we, as Catholic Christians who are concerned with the poor, work with the government without buying into Marxist ideology. That’s a rich background and made him who he is.”

The election followed four days of prayer, silence, and one-on-one conversations in a process called murmuratio. Father Sosa was elected on the first ballot.

“It’s a very prayerful process,” Father Bucki said. “The spirit spoke and people were listening. As a Jesuit, when you hear about the process and how well it works, you say, ‘Yes! The spirit is working and the tradition is alive.’”

The General Congregation’s 212 delegates include five members from the USA Northeast Province, to which Le Moyne belongs. One of them, Father David Ciancimino, is the former leader of the province and received a 2015 honorary degree from Le Moyne College.

The Church of Gesu in Rome, site of a Mass of Thanksgiving after Father Sosa’s election, holds great symbolism for Jesuits, according to Father Donald Maldari, a Jesuit priest who teaches religion at Le Moyne and has lived in Rome.

The church houses the remains of St. Ignatius of Loyola, the order’s founder, as well as the remains of other saints and Jesuit leaders. A highlight of the church’s numerous priceless artifacts is the 14th century icon of Santa Maria Della Strada, the patron saint of the Jesuits.

“That church was on a major thoroughfare in 16th-century Rome,” Father Maldari said. “Ignatius wanted to see the pope coming and going. Outside is classical and simple, then you go in and it blows you away with the Baroque design.”

The church, like subsequent Jesuit churches, does not have a narthex, or vestibule. “There’s no place of transition from outside to inside,” Father Maldari explained. “There was just one world. Going into the church you see another dimension of that world, which is glorious.”

In his first homily as superior general, Father Sosa called for bold, collaborative ways of engaging with the world. He urged his brother Jesuits to “think about ways of deeply understanding the unique moment of human history in which we are living, and to contribute to the search for alternatives for overcoming poverty, inequality, and oppression.”

“The mission of the society is to serve the church,” Father Maldari said. “The way it serves the church has developed and changed over the centuries. We got into the education business because no one else was and it was the greatest need. Now we have to ask ourselves, ‘What is the greatest need that no one else is doing?’ We have to be more imaginative and creative.”