Fathers Tim Taugher, pastor of St. Francis of Assisi Parish in Binghamton, and Fred Daley, pastor of All Saints Parish in Syracuse, were among the thousands of people who filled Independence Mall in Philadelphia Sept. 26, waiting to hear Pope Francis speak about human rights, immigration, and freedom. 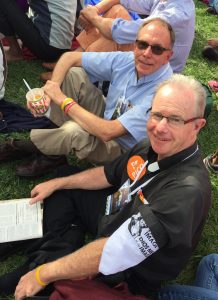 The two began the day at an address by Cardinal Peter Turkson, President of the Pontifical Academy for Justice and Peace, part of a three-day summit convened by People Improving Communities through Organizing (PICO).

A faith-based, grassroots initiative, “PICO is really connected with the ‘Francis mission,’” said Father Taugher. Cardinal Turkson spoke to issues of racism, immigration and mass incarceration, he said, and the call to justice, fraternity, and harmony with yourself, with the land and with God.

That talk was a precursor to Pope Francis’ address, which highlighted many of the same themes. Father Daley said seeing those themes addressed by the pope was what drew him to Philadelphia.

In 41 years as a priest, “I have been called to accompany the poor, the broken, the powerless, the marginalized, and also called to work to change the systems and structures that are the root causes of the terrible pain of so many in the world,” Father Daley said. “It is just such a thrill to have Pope Francis, who is steeped in the social justice gospel. Obviously he’s living the social justice gospel and is touching the hearts of the global community. It just seems like a wonderful privilege to be near and with such a person.”

The Church, including leadership in the U.S., Father Daley said, “has gotten so pulled into the culture wars that many of these issues of the protection of human life have been put on the back burner while others have been talked about in isolation — and to the extent we do that, we lose credibility.”

Pope Francis’ calls to respect human life in all stages is “giving such credibility to the Church today,” he said. “It’s encouraging me to go home and work harder to proclaim that seamless garment of Cath social teaching that’s kind of been put in the background over the last 20 or 30 years,” he added.

Father Taugher also noted the inclusiveness of the pope’s visit. “There are other faiths here, not just Catholics, getting so much out of Pope Francis,” he said. “It’s amazing to be part of that, too.” 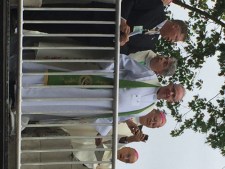