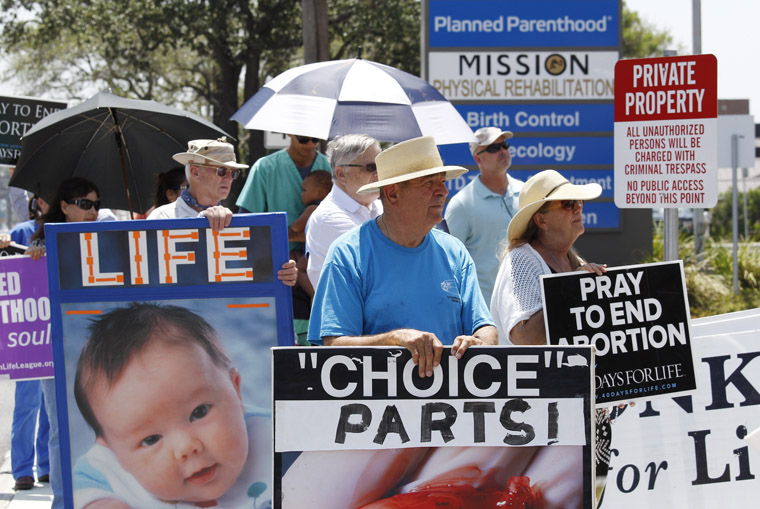 It was a moment for goose bumps and “Hallelujah,” tempered by the knowledge that the fight for life goes on.

In a 5-4 decision June 24, the U.S. Supreme Court overturned its nearly 50-year-old decision in Roe v. Wade that legalized abortion in this country.

Alycia Guy attended the noon Mass June 24 at the Cathedral of the Immaculate Conception in Syracuse. She and her husband, Rick, have eight children and five grandchildren and attend Holy Family Church in Fairmount. Asked about the Supreme Court ruling, she said: “I got the news flash on my phone, and I got goose bumps. Like something you never thought in your entire life that you would see happen. I was just so happy.”

Asked why she thought the court’s action was so long coming, she said, “I don’t know. The fact that it was overturned on the feast day of the Sacred Heart — I don’t think that’s a mistake.”

Catholic News Service reported: “The court’s 213-page ruling in Dobbs v. Jackson Women’s Health Organization was not totally unexpected due to the leak of an opinion draft a month earlier. The ruling emphasizes that there is no constitutional right to abortion in the United States.

“The Dobbs case focused on Jackson Women’s Health Organization, an abortion clinic in Mississippi that challenged the state’s law banning abortion after 15 weeks of pregnancy.

“The court’s reversal of its long-standing abortion ruling brings abortion policy decisions to the state level. At least half of states plan to ban or restrict abortions with this decision in place, and 13 states have trigger laws put in place set to ban abortions right away upon Roe’s reversal.

“‘We hold that Roe and Casey must be overruled,’ Justice Samuel Alito wrote in the court’s majority opinion. Casey v. Planned Parenthood is the 1992 decision that affirmed Roe.”

But the Secretariat of Pro-Life Activities of the United States Conference of Catholic Bishops said in a fact sheet that preceded the June 24 ruling:

“‘If Dobbs v. Jackson Women’s Health overturns Roe v. Wade, doesn’t that mean women in the U.S. will no longer be able to get abortions?’

“No. All that this decision could mean is that each state will decide which restrictions it will allow on abortion. In states such as California and Vermont, abortion will continue to be permitted at least up until 24 weeks (when evidence shows that preborn babies feel pain).”

“We’re so grateful that the Supreme Court has recognized that there is no right to abortion in the Constitution,” said Lisa Hall, director of the Office of Family/Respect Life Ministry for the Diocese of Syracuse. “By the same token, there’s still much work to be done to walk with women and affirm the gift of life.

Her office has put together a list of pregnancy-care centers across the diocese, from Oswego to Binghamton. “There’s a whole listing of places that women can go should they need assistance,” she said. “Our  parishes should be places of warmth and welcome to any woman wanting to choose life and needing referrals or resources. I also hope that every Catholic is aware of these resources as well.”

“I think we need to support the pregnancy-care centers in every way that we can, financially, materially, spiritually and with our time.”

Hall hopes the Supreme Court decision opens a conversation about the value of every human life. She noted that an unborn baby “has its own DNA, has a heartbeat, brainwaves.”

Her office promotes the annual Mass for Life, at which the Pro-Vita Awards are given as scholarships to three high school seniors for their essays on the topic “Why are you pro-life and how will you help build a culture of life?”

“We’ve marched for life,” Hall said, “we’ve prayed for life, we work for life with the other pro-life entities around Central New York through the CNY Network for Life. … We’ve done workshops over the years about the sanctity of life, about end-of-life issues, so many far-ranging life issues. And our parishes should be a place of warmth and welcome to any woman wanting to choose life and needing referrals or resources.”

She said we must also recognize that “there are vast amounts of women and men who have been wounded by abortion. And we have to be there for them as the Church to help them with their post-abortion healing and help connect them to the love and mercy of Christ.

“And we’re very grateful in the Syracuse Diocese that we have Project Rachel Ministry that does this very thing: walks with women and men if … they are seeking healing after having been involved with abortion. ”

A local effort to prevent abortions is 40 Days for Life – Syracuse; the 40 Days for Life website says it is an “internationally coordinated 40-day campaign that aims to end abortion locally through prayer and fasting, community outreach and a peaceful all-day vigil in front of abortion businesses.” As of July 1, the website said 21,675 lives had been saved since 2007.

Twice a year for 14 years, volunteers for 40 Days for Life – Syracuse have prayed in front of Planned Parenthood. Co-coordinator of the Syracuse campaign is Shannon Guy, the sister-in-law of Alycia Guy.

Shannon said the “Hallelujah” is the fact of abortion “not being recognized as a constitutional right anymore on the federal level, which we’re very, very happy about.”

Asked if she thinks her prayer warriors in front of Planned Parenthood had something to do with inspiring the Supreme Court’s decision, she said:

“Absolutely. I think we as Catholics believe that prayer changes things. … We’ve run 28 campaigns and we certainly believe that … all of what’s happening now is being brought forth by prayer and sacrifice.”

“There have been so many people praying and fasting and working toward this through the years,” she said, “but to God be the glory. He has done this, and we’re just eternally grateful that our country is in a … post-Roe America now, which is amazing.

“And we continue to work to create a culture of life here, especially in Syracuse and in our state that is so pro-abortion. So we have our work to do but we’ve got everything in place, so we … will keep serving moms and connecting them to the help they need and just help fostering a respect for all human life. …

“My mother, who’s in her 90s, said, ‘To see this in my lifetime is amazing.’ … So it’s a beautiful thing and we’re celebrating, and we continue to press on and stand firm with our pro-life stance and do all we can to help change hearts and minds for life.”