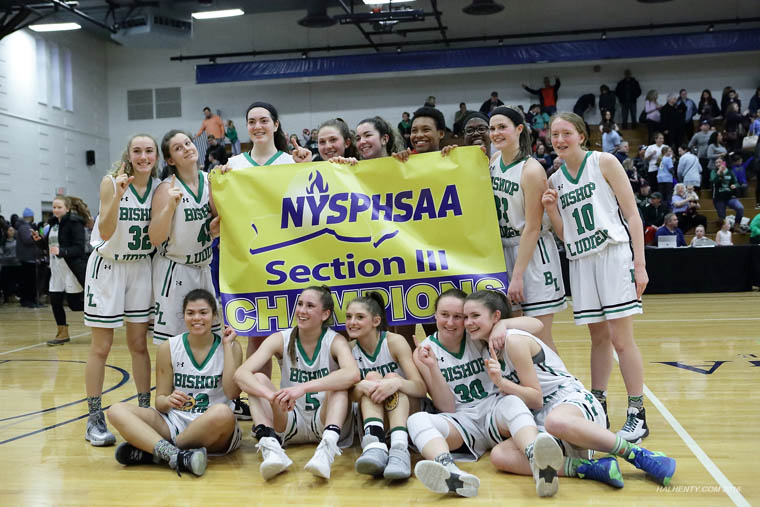 Before the girls Section III Class B championship basketball game March 5 at Onondaga Community College, the Bishop Ludden players waited and waited in a window-lined hallway for the preceding three-overtime game to end.

A joyous shriek erupted among the huddled players at the arrival of the man in the corduroy hat.

Father Dan Muscalino, in his 29th year teaching at Ludden, immediately gathered the players in a circle and said a Hail Mary with them and blessed them.

His mother got the hat for him many years ago. Is it his lucky sports hat?

“Apparently THEY think it is,” he said.

Father Dan’s blessing turned out to be the benediction of champions. Ludden defeated Bishop Grimes 56-26 to advance to the regional game against Seton Catholic Central, which beat Susquehanna Valley 52-46 on March 3 to win the Section IV Class B championship. The regional game is set for 2 p.m. March 11 at Onondaga Community College.

Grimes fed the ball to 6-foot star Azariah Wade in the first quarter and she scored six points as the Lady Cobras held the Lady Gaelic Knights to an 8-8 tie entering the second quarter. Showing no hesitation on any of her moves, as smooth as the Grimes band that played the national anthem with nuanced precision, Wade fought hard against constant double-teaming.

But Ludden boosted its pressure on Wade and took a 26-14 lead at the half.

As Ludden’s frontcourt harassed Wade, the Gaelic Knights’ backcourt employed a frenzy of steals, drives, and clever passes. Ludden guard Meg Sierotnik scored 11 points and picked off so many Grimes passes (eight) that it seemed preordained, but her coach said it was simply a matter of anticipation. “Ball pressure was our game plan,” Coach McManus said, “to make sure they weren’t getting any direct paths to the ball.”

Sierotnik’s backcourt partner, Danielle Rauch, totaled 15 points, 10 assists, five rebounds, five steals, and two blocks. She dribbled behind her back and sent overhead passes like a jai alai player, curling quick tosses that snapped into the hands of Laura Patulski (12 points, five rebounds) and Aurora Deshaies (seven points, five rebounds). Patulski made the all-tournament team along with Rauch, who was the tourney’s MVP. All-tournament players for Grimes were Wade (10 points) and Abby Wilkinson.

In the second quarter, Rauch stole the ball, drove, and did a “March of the Wooden Soldiers” move: Holding the ball low, she kept her arm stiff all the way up before letting the ball barely scrape the backboard — the ultimate acute-angle layup. A head-fake layup and a fadeaway jump shot also helped her build Ludden’s lead.

Sierotnik also plays with joyous creativity. At the end of the third quarter, she was heavily fouled but made a 12-foot shot while falling down. She got up with a big smile, and Ludden led 48-19 going into the fourth quarter.

Coach McManus said it’s “really a blessing” to have a player like Rauch. She noted that Rauch was two stats short of a quadruple-double this year, “and those are NBA numbers. All season long, she’s been triple-double, triple-double, double-double.”

“Simply put, they played with more poise and composure than we did,” Grimes Coach John Cifonelli said in an email. “We have dealt with teams double-teaming Azariah all season so that wasn’t unexpected. But our inability to maneuver around their guards at the top of their zone was very disappointing. I thought Meg Sierotnik and Laura Patulski were the difference in the game. We all know what Danielle can do, much like Ludden knew what Azariah can do. But Ludden got some tremendous contributions from their supporting cast.”

Seton has guards who can handle the ball and shoot the ball, Coach McManus said. “There’s three of them, and any given night, they can go off.” She will encourage her team to “play honest and contest and don’t let them get looks at the basket.”

Ludden Athletic Director Gallagher Driscoll found the Grimes game so riveting that he stood up for the whole thing, even though a few seats were still available.

“I thought our girls were excellent,” he said. “I thought our coaches had them well prepared. We came out right from the get-go. We played with energy, we played with enthusiasm, and we beat a good team. Bishop Grimes is a good team. We were ready to play tonight, and I give all our girls and our coaches the credit. We did a good job of shooting gaps, making every play difficult for them.”

“Believe it or not, that is not the best we’ve played all season,” Rauch said.  “We really have a lot to improve on going into regionals. It’s going to be really important that we play to the best of our ability.” She and Sierotnik cited the need to improve on jump shots and talking on defense.

In the playoffs, Ludden (21-3) has beaten Marcellus, Notre Dame, South Jefferson, and now Grimes (20-4). The Gaelic Knights had been begging Father Dan to show up, but his various duties take him everywhere. Last year, he taught nine classes in addition to serving as pastor of St. Francis Xavier Church in Marcellus. This year, he teaches six classes.

But the students wrote the game time on Father Dan’s blackboard, and Rauch, who is in his Latin and Religion classes, constantly reminded him of it. “And then he pulls up at school [on March 3] and said, “I’LL BE THERE ON SUNDAY AT 3:45!’ And I was so excited,” she said.

“These are great kids, both schools [Ludden and Grimes],” Father Dan said. “They’re both Catholic schools. And the center of both of our schools is God and the gospel of Jesus Christ, and everything else kind of radiates from there.”

Although he teaches Latin, he did not require the students to make their request of him in that language.

Asked what would be a good Latin phrase for the day, he said, “Deus magnus est: God is great.”

Levy had 23 points and Ava McCann added 20 to lead the Lady Saints.

The third-seeded Seton Catholic boys basketball team fell to Waverly in the Section IV Class B semifinal on March 1. Junior Peter Hartrick had 13 points to pace the Saints, while eighth-grader Marcus Dyes added 10. The Saints finished their season with a 15-7 record.