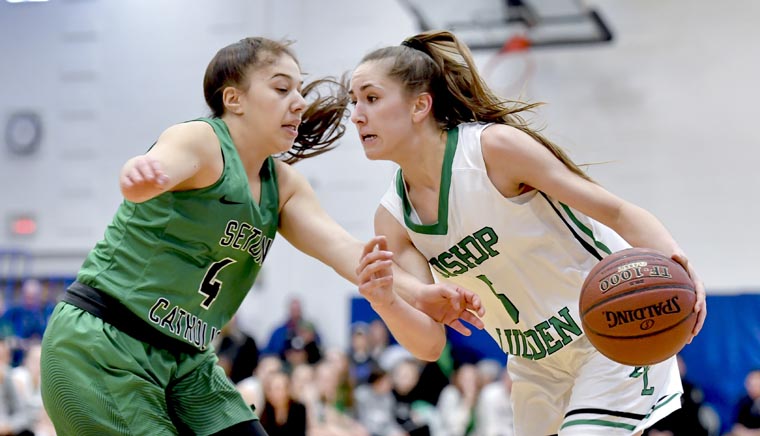 If someone wanted to “pull a Rauch” with a spectacular move, backcourt player Danielle Rauch was asked, what move might that be?

Interviewed during her lunch break during Holy Week at Bishop Ludden Junior-Senior High School, Rauch reflected on being named the 2017 All-CNY girls basketball small schools Player of the Year. Her coach, Nicole McManus, was named the 2017 All-CNY small schools Coach of the Year. The judges were journalists at syracuse.com and The Post-Standard with input from Section III coaches.

“It’s an award that I share with the school,” Rauch said, “because, without playing for Bishop Ludden, I wouldn’t have been given this opportunity to achieve as much as I have in my basketball career.”

A junior, she already is Bishop Ludden’s all-time leading scorer — for girls or boys — with 1,484 career points.  She averaged 17.9 points, eight assists, 6.6 rebounds, and five steals a game this season. Her team won the league and sectional titles before losing to Seton Catholic in the state regional game.

Winners don’t wince over a loss like that; they growl a little bit, face reality, and look hungrily toward next season.

Both Rauch and her coach said they knew that when they played Seton, it would stand as the de facto state-championship game. And that’s what happened: After beating Ludden by nine points, Seton went on to rout its next two opponents for the title.

Talent offers an opening for perfection, so there is no senioritis in the offing for Rauch next year.

She said she and her teammates will be “coming to practice and playing as hard as we can to get better because, I mean, my senior year I don’t want to face a letdown like that again.”

The constant improvisation that she shows in games — dribbling behind her back or throwing one-handed passes that hiss like a fastball — actually requires painstaking systematic preparation. Having played basketball since she was 4, Rauch knows that complacency is for powder-puff players.

“And so, I just kind of practice a lot every day,” she said in a firm voice, as if she were giving a locker-room pep talk. “You gotta go in and try to do something else. Perfect it. Don’t move on to something unless you’ve figured out the first thing. Once you learn how to make a layup, then you move back. Once you learn how to make a foul shot, then you move back to a 3[-point shot]. It’s step by step. It’s a really long process.”

If her life almost seems to exist merrily within the basketball itself, she also appreciates the wider Ludden universe and why she’s there in the first place.

“Every morning when I wake up,” she said, “I pray, ‘Thank you, Lord, for today.’ Because every day is a blessing, and the people around me in school that I get to experience every day, I’m so thankful for all of them. All my teachers, especially Father Dan [Muscalino].” She is also grateful for her parents and for her friends.

“She’s a great kid. She’s a fine young woman,” Father Dan said. “I have her in both my Latin and religion class. She’s a student and an athlete. She’s a young woman of impeccable character. … She’s just an all-around good person — the kind of person that every pastor would love to have in their parish, and the type of student every teacher loves to teach.”

He added that Rauch has a “really good sense of humor” and she “appreciates that she’s been very blessed by God. She doesn’t take any of that stuff for granted.”

In an email, Ludden Athletic Director Gallagher Driscoll said, “Danielle is very deserving of this award; she always has done things the right way; it’s never been about her but always about the team! She is what high school athletics should be all about: great daughter, sister, classmate, teammate, and friend. Great kids deserve a day in the spotlight!”

She shares that spotlight with Coach of the Year McManus, who just finished her first year as head coach of the varsity at Ludden (the Lady Gaelic Knights finished at 21-4). Previously she was assistant varsity coach for two years while also serving as head coach of the junior varsity. She also has experience coaching Amateur Athletic Union basketball.

Athletic Director Driscoll added: “Coach McManus is a basketball junkie! She is very passionate about the game but she is more concerned with developing our student-athletes into young adults! Her program does great things on and off the court! We are very proud to have her on the Ludden Team!!!!”

McManus said Rauch “works incredibly hard on her game and has made many sacrifices to be where she’s at right now.”

Like Rauch, McManus is very determined to win the league and sectional titles again and to compete for that state title next season. “We’re not satisfied,” Coach McManus said.

Bishop Ludden senior Meg Sierotnik played in the backcourt with Rauch, combining for baskets and moving the ball very aggressively at all times.

“I’m very proud of her,” Sierotnik said when asked about Rauch’s award. “She definitely deserves it. She puts a lot of time and effort into her skills; that’s why she has them. She kind of like breathes basketball.”

Sierotnik actually played against Rauch in elementary school, but they have been teammates since the seventh grade.

“We were enemies,” she said with a laugh, “but now we’re best friends!”

Among the things that Rauch taught Sierotnik: “Never quit.”

Practice isn’t a grim time. “We fool around every now and then,” Sierotnik said, “get some giggles in.”

Senior teammate Ally Wiegand was about 2 years old when she met Rauch; their brothers were best friends. Wiegand and Rauch played hoops for St. Margaret’s School in Mattydale.

“She’s been a great teammate all along,” Wiegand said. “We actually went 10-0 our last season together at St. Margaret’s. And then, she went to Gillette Road Middle School, but we came back and played again here at Bishop Ludden.

“And she’s just been an incredible teammate ever since 2 years old, playing basketball together, and I couldn’t imagine my basketball career without her.”

Ever polite, Rauch thought deeply about that question about her signature basketball move.

Opponents will not be laughing.

Coach of the Year

First team and Player of the Year

* Determined by journalists from syracuse.com and The Post-Standard with input from Section III coaches