‘Make it real’: Deacon directs ‘A Man for All Seasons’ 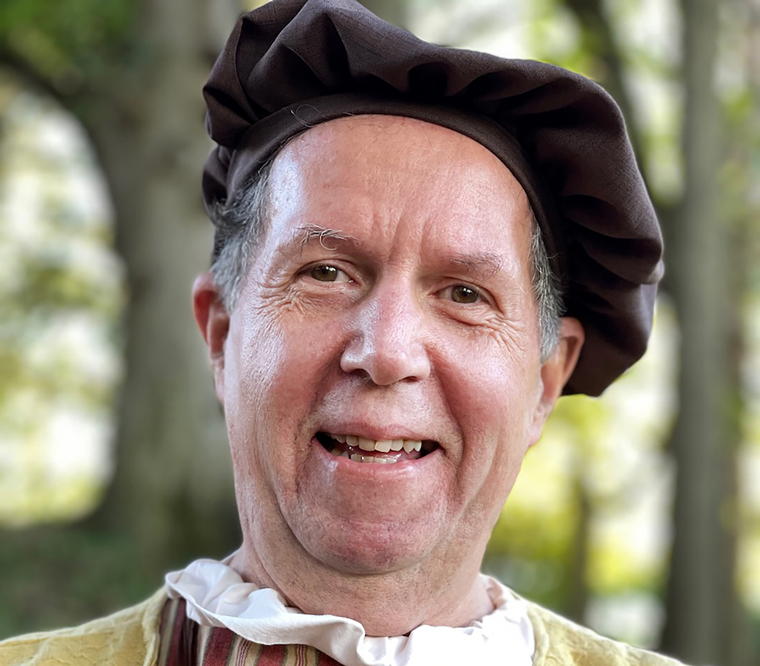 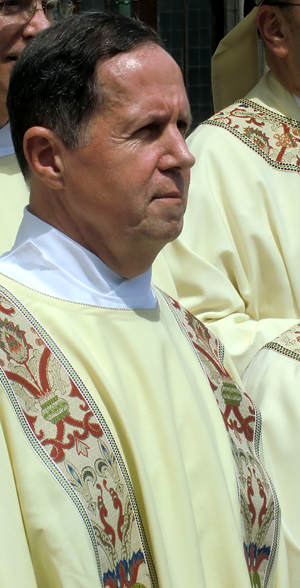 Deacon Dan Stevens, the director of Syracuse Shakespeare-In-The-Park’s production of A Man for All Seasons, is shown on his ordination day, May 10, 2014. (Photos courtesy Francois James)

St. Thomas More showed “admirable tenacity” for his “core beliefs” before being executed, according to the deacon who is directing the upcoming A Man for All Seasons.

Deacon Dan Stevens noted that More, as the 16th century Chancellor of England, rejected the requests of King Henry VIII to annul his marriage to Catherine of Aragon in order to marry Anne Boleyn and to install him as the head of the Church in England.

“We act as an agent of God in marriage,” Deacon Stevens said. “We are obliged through marriage to take that other person, to revere them and respect and to show them all the love that God has for that individual throughout their life. That’s how More viewed marriage and so there was no way he could agree to just set aside a queen or anyone, frankly, in marriage in order to accomplish some goal.

“This was so against his core beliefs that even when threatened with torture, death, loss of status, he refused to change his mind and I think that’s admirable tenacity.”

“I saw it long ago,” Deacon Stevens said, “like back in the ’60s when it was first available, and … I discourage actors from watching other versions because we each have our own instrument that we use to perform. … We each have to bring our own honesty and life history to the character and find truth within the character.

“So I think even if it’s an award-winning portrayal, it’s not the only successful potential portrayal of the character.” He added it’s “better that we find something that’s our own. That’s not just true of [the actor playing] More; it’s true of the guy playing Henry, it’s true of my wife [Nora O’Dea] playing Lady Alice More—they each have to find themselves in the character to make it real; otherwise it looks artificial …, it’s not truth.”

‘It cost him his head’

The upcoming performance, with a cast of 11, is part of Syracuse Shakespeare In-The-Park and is produced by Ronnie Bell, the community-theater troupe’s executive director. “I personally admire Thomas More’s stand,” Bell said, “because he … wasn’t defiant in the way he refused to accede to Henry VIII’s wishes. But he was resolute and he did it totally in what he considered to be a legal way. … He wouldn’t compromise himself, and that’s a great characteristic in that time although it cost him his head.”

Director Stevens has been active in community theater for decades as an actor, director, writer and stagehand.

Ordained in 2014, he is in the preaching rotation at Blessed Sacrament and St. Vincent de Paul churches in Syracuse. At BSC he is responsible for the Rite of Christian Initiation of Adults and at SVC he handles the bereavement ministry. Also, he teaches homiletics in the deacon-formation program and he is the diocesan liaison for the foreign and domestic missions.

“Deacons are called to have one foot in both the secular world and in the clerical world,” he said, “so we’re expected to be out among the people.”

As an actor, he has been out in front of the people in over 40 roles with 11 community troupes. He earned a BA in mathematics from SUNY Plattsburgh and an MBA from the Martin J. Whitman School of Management at Syracuse University.

As a college student on a three-day weekend with nothing to do, he attended a play at SUNY Plattsburgh.

“What struck me was the action was happening in the room that I was in,” he said. “It wasn’t on a screen …, it wasn’t recorded, it was live, and I was in the room where it was happening. … I thought, Wow, this is like no experience I’ve ever had in my life, and it stuck with me ever since.”

“I’m blessed that my wife … was a drama major in college so she has much more legitimate credentials than I have, and throughout our marriage we’ve been able to do quite a bit of theater together, so it’s a unifying art form for the two of us.”

“I’ve made a number of my closest friendships through theater. It’s exposed me to people of all ages and ethnicities, really drawn me out of myself, and the wonderful thing about it is, unlike sports where sooner or later your body fails you and you no longer can compete or even play at a decent level, with theater if you stay healthy you can do it any age. There’s always a role to be played, either onstage or backstage and so I just love it for all those reasons—the socialization and the art form.”

Sir Thomas More is played by Ithaca resident Jack Sherman, who is retired  after serving for 10 years as a City Court judge in Ithaca and then 20 years as a judge in Tompkins County Court and Tompkins Family Court.

“The consistent theme of the play is not only religion but the rule of law,” Sherman said, “and More felt under the rule of law, he should be safe and not lose his life.”

He explained that More could not bring himself to swear an oath that the king was the supreme head of the Church in England. Sherman said that under questioning in the play, More says he has not denied the oath, he simply remains silent about it. “And he thought that should get him through and it should have legally,” the retired judge said. “But perjury was brought in against him” by a man who lied about what More had said.

What would More have to stand up to today that would be so perilous?

“It’s such a long list,” Deacon Stevens said. “I think he would be disappointed by those in elective office who ignore the needs of the poor and fail to recognize that we’re all one family on earth and that what happens in other countries is interconnected with what happens in our own country, and that we do our fellow sons and daughters of God a disservice by hiding behind our own national needs as an excuse for not being generous and loving to people in other countries, especially the poor.”

If you go to the show

Syracuse Shakespeare-In-The-Park’s latest show, A Man for All Seasons, is produced by Ronnie Bell and directed by Deacon Dan Stevens.

In this soul-searching historical play by Robert Bolt, the plot is based upon events leading up to the execution of St. Thomas More, the 16th-century Chancellor of England who refused to endorse Henry VIII’s wish to divorce his wife Catherine of Aragon in order to marry Anne Boleyn. The play opened in 1961, winning multiple Tony Award, including Best Play. The 1966 film version also won multiple awards, including Best Picture.

General admission tickets are $20; seniors and students, $15; those affiliated with Syracuse University, $10. Premium tickets are available for $30, including front-row seating, $15 worth of food from Beer Belly Deli, a Gannon’s ice cream token, a cold bottle of water and a commemorative color playbill. For the safety of the community, patrons must remain masked except while eating or drinking. Tickets are limited, so patrons are advised to book early and consult the full COVID-19 prevention safety protocols at https://tickets.ssitp.org/man.