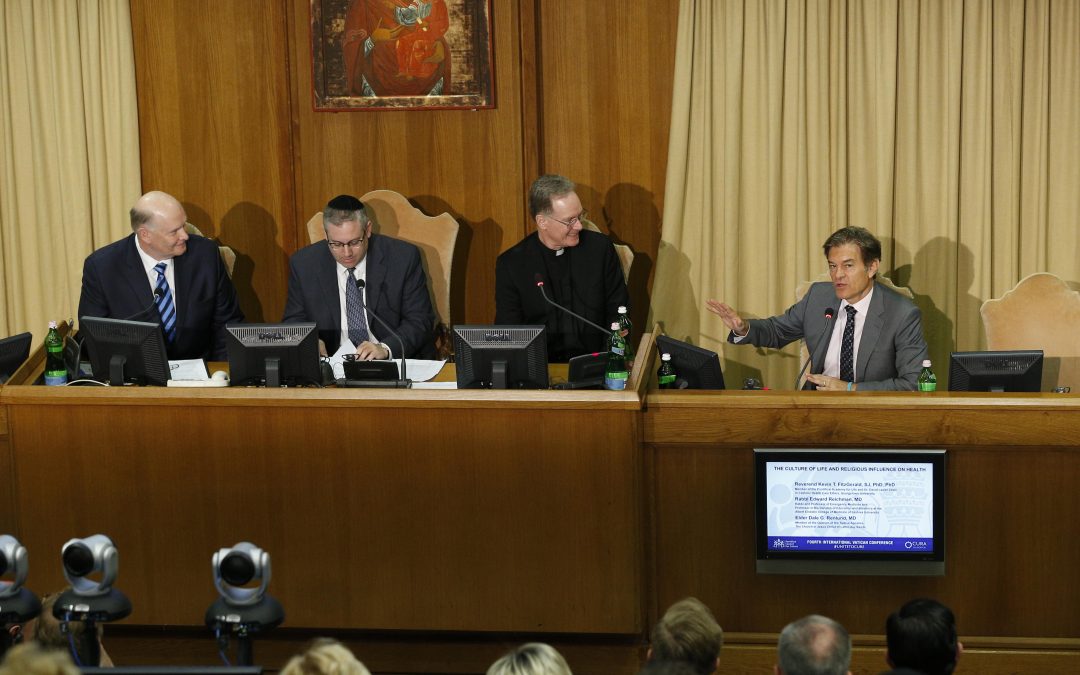 VATICAN CITY (CNS) — Religions provide hope, meaning and models of behavior that have been proven to promote health, healing and long life, said speakers at a Vatican meeting.

The fourth “Unite to Cure Conference,” co-sponsored by the Pontifical Council for Culture, brought hundreds of physicians, researchers and health-care executives to the Vatican April 26-28 for a discussion about new medical technology, the future of medicine and practical steps to promote health and health care treatment around the world.

Dr. Mehmet Oz, the U.S. television host and professor of surgery, moderated a panel discussion on “The Culture of Life and Religious Influence on Health” and began by asking the panelists about the role of faith, and especially prayer, on healing.

Jesuit Father Kevin T. FitzGerald, a geneticist and professor of ethics at Georgetown University in Washington, D.C., said there is a difference in praying for a specific outcome and praying, “‘Thy will be done,’ but a hopeful ‘thy will be done,'” or, in other words, expressing trust in “a merciful, loving God who has your best interests at heart.”

Dr. Dale G. Renlund, a cardiologist and member of the Quorum of the Twelve Apostles of the Church of Jesus Christ of Latter-day Saints, told the conference, “Everyone faces difficulties; rain, wind and floods come to everybody, and the real thing religion can do is one can pray for strength to be able to go through it and get the help that one needs.”

“Belief in a higher being” and belief that one’s life has a purpose bring patients comfort, Renlund said, and that gives them strength to face an illness and its treatment.

Rabbi Edward Reichman, a physician and professor of emergency medicine at the Albert Einstein College of Medicine at Yeshiva University in New York, said, “there is no question that religion is an integral part of healing” when the patient is a believer. But also essential, he said, are the practices and teachings of religion that encourage a healthy lifestyle, including rest, social interactions and diet.

Oz told the conference that studies conducted around the world repeatedly list “having a faith” as one of the variables for human longevity.

Mormons, Renlund said, received what they believe was a revelation from God in 1833 providing a health code that “includes no alcohol, tobacco, coffee, tea” and urged eating “meat sparingly and a reliance on vegetables, fruits and grains.”

Studies conducted at the University of California Los Angeles beginning in the 1980s found that Mormons live longer than their peers, he said. A practicing Mormon man lives an average of 7.3 years longer, and 1.5 of those years “were due to abstinence from tobacco,” he said.

Oz also asked the panelists to address the issue of high moral standards, religious guilt and the possibility that it could lead to depression, a belief that illness is punishment or even suicide.

First, Renlund said, medical and other health professionals need to learn more about suicide and the “intense pain,” aggravated by “loneliness, hopelessness and helplessness” that can lead people to believe it is better to die.

The message from heaven, he said, is not that “because I’ve made a mistake, I’m now worthless,” but rather that “you can change, you can up your game.”

In fact, Rabbi Reichman said, most studies have shown that people with a religious belief and practice are less likely to attempt suicide than those who do not believe.

“The gift of mercy is what God wants to give us,” Father FitzGerald said. “We are going to screw up. It’s in our DNA and that one we are not going to be able fix with CRISPR,” an acronym for a new gene-editing technology that experts at the conference were to discuss later.