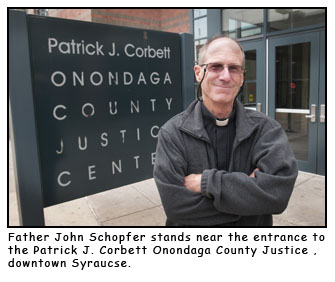 Co-founder and current coordinator Bill Cuddy noted that Jail Ministry had begun to consider itself “a ministry rather than an agency” several years ago.

“We’re just not a 501C3,” he said, referring to a category of agency under the umbrella of Catholic Charities.

FCM is specifically localized to Syracuse’s north side community and centered at Assumption Parish, while Jail Ministry’s building is in the city’s southwest corridor. When Dave Allen moved from FCM to become the coordinator of Brady Faith Center, Cuddy said the potential for a partnership became obvious.

“Dave Allen moved over to Brady and brought with him that collaborative vision and it seemed like a perfect fit,” Cuddy said.

Allen left the door open for future activities in conjunction with FCM, but noted that, for the time being, the Brady Faith Center and Jail Ministry will remain as they are.

Cindy Falise, director of Catholic Charities in the Syracuse Diocese, said that Jail Ministry and the Brady Faith Center have complementary missions and that together they will be able to multiply the results of their efforts.

“We feel that moving them to Brady Faith Center is going to be a nice relationship of serving that neighborhood and working together to broaden whom they can reach,” she said.

According to Falise, the respective missions of Catholic Charities and Jail Ministry are simply different.

“They have a group of wonderful volunteers who go into the jail and meet with the [inmates] and respond to what their needs are, try to to evangelize them, show them a better way of life,” Falise said. “It’s just very different than trying to get food to feed somebody or after school care or that [type of service].”

Along with Allen’s experience in collaborative environments, Father Schopfer’s connection to the Justice Center made the relationship between the two ministries seem natural.

“I think it was very important because both ministries are concerned about providing succession planning and Father John as it relates to his experience of being the chaplain at the jail lends to us and to Jail Ministry this connection for the future,” Allen said. “He understands the workings of Jail Ministry and without his experience and expertise, we probably wouldn’t have the pieces together to make this decision.”

Allen underscored the strength of both ministries’ longstanding tradition of service.

“We both have this long, rich tradition, 63 years for Brady Faith Center and 33 years for Jail Minstry. If you add those two together collectively, we have 96 years of historical presence serving people in the city of Syracuse,” he said.

Father Schopfer has ministered as Justice Center chaplain since 1995. He noted, however, that he has been visiting incarcerated people in the jail since he began serving on the south side.

“The two ministries have so much in common in terms of serving people who are often in hurting situations and often in a difficult time in their lives. Sometimes, people from the neighborhood, sometimes a Brady Center participant, will have a family member who is or has been incarcerated,” he said. “I began visiting people as soon as I came to this neighborhood, long before I became the sacramental minister at Jail Ministry. Sometimes the same people can be involved in it. Sometimes the people can be marginal and sometimes it’s men on the street.”

Both Allen and Father Schopfer agreed that the new partnership is entirely within the tradition established by Msgr. Charles Brady, after whom the Brady Faith Center is named.

“This is something that Father Brady would just be thrilled about,” Allen said.