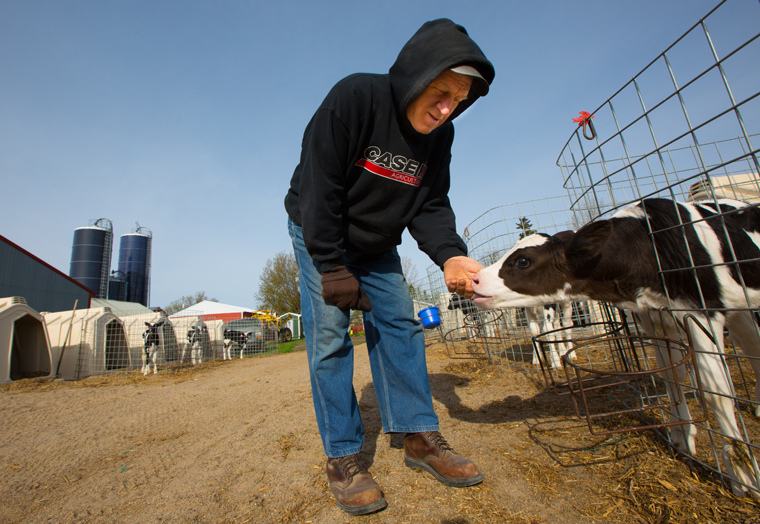 LONSDALE, Minn. (CNS) — Ray and Bridget Pieper’s family near Lonsdale took a loss when they shipped out 40 cows for slaughter that would have continued producing milk if schools and restaurants hadn’t closed, dampening demand in March because of the novel coronavirus pandemic.

Hog farmers Harry and Kellie Sloot near Winthrop had to act fast to find new outlets for their product when business slowed for restaurants and food service. About 4,000 head per year from Sloot Family Farms goes to a niche, high-end food company that serves those outlets; about 2,000 head goes to Tyson Foods for processing.

“The product sold to restaurants and food service went to almost zero,” Harry Sloot said. “We had to find other buyers. And now other buyers don’t need product.”

The Piepers and the Sloots are just two of thousands of farmers across Minnesota and the country hit by repercussions of the economic slowdown — and in several cases shutdown — of meatpacking plants because of outbreaks of COVID-19. With several meatpacking plants hit by the virus and idled, about 40% of U.S. hog slaughtering capacity has been temporarily lost.

As demand dropped for dairy products in restaurants, schools and other outlets, milk producers in Wisconsin dumped product that had no place to go.

The impact reverberates to crop farmers such as Dave Neske of Buffalo, Minnesota, a member of St. Timothy Parish in Maple Lake, who estimates losing $30,000 since March because the corn and soybeans stored at his farm are not fetching the prices they would have under other circumstances. Even corn-based ethanol factories are being idled because of lower oil prices and reduced demand for gasoline, Neske said.

A longtime advocate of a diversified farm system of large, medium and small farms, Ennis said the

pandemic is laying bare the vulnerabilities of relying too heavily on large plants with just-in-time production, because one broken link fouls up the closely knit chain.

While midsize and smaller farms use or can find niche markets or sell direct to buyers in homes, larger farms might have too much product going to too few places, he said. When plants shut down, euthanizing animals that have grown too large for processing becomes the only answer.

President Donald Trump’s order that meatpacking plants remain open as an essential service will have to be balanced against safety for the workers, Ennis said. Startups will be slow and workers will be adjusting to new protocols for social distancing and avoiding cross-contamination that could spread the virus, he said. Production also will be significantly reduced because fewer workers will be allowed into plants at any one time.

“So now, how do we redesign (these plants) to be safe?” Ennis said. “And people stay six feet apart? There are locker rooms and all kinds of chances for cross-contamination. They will have to do extra cleaning.”

Farmers themselves are worried about contracting COVID-19 because many don’t have ready backups to plant their crops, take care of their livestock and harvest their grain, Ennis said.

Other rural concerns include too few hospitals with too few beds and long distances for people to travel for medical care in the event of an outbreak. The health of migrant workers is a concern because they do so much during harvest and meeting other farm needs, he said.

Neske said he will go without a part-time worker this spring because of the economic strain, and he hopes he remains healthy. “My wife and I are doing it all ourselves,” he said.

Ever-present concerns don’t go away, either, Neske said. “Weather plays a big factor — and having faith and hope.”

The Piepers, members of Most Holy Trinity Parish in Veseli and owners of Metogga Lake Dairy Farm, said they were milking about 400 cows a day, but with the slowdown, the dairy plants they use don’t need as much of the product. The Piepers haven’t had to dump milk, but they not only had to cull their herd as they adjusted to lower demand, they had to do it at a time prices for slaughter animals were down, Bridget Pieper said.

On their hog farm, the Sloots, members of St. Francis de Sales Parish in Winthrop in the Diocese of New Ulm, found several smaller production facilities within about a 300-mile radius of their farm.

“We were fortunate enough to find some processing, but we did a lot of legwork,” Harry Sloot said. And they recognize that not every producer has that option.

“It’s something that’s heart-wrenching,” he added. “You put your heart and your soul into your work. All of your sweat equity goes into it. It’s not the kind of work where you leave, and ‘it’s not my problem.’ It’s like your new car, you don’t even want a scratch on it.”

All decisions on the Sloot farm are made in an ethical manner, and that won’t change, he said.
“I can’t say it’s brought me to where I question my faith,” said Harry Sloot. “I’ve dealt with death, stress in farming and in my personal life. Faith is something that keeps me grounded. It’s an anchor in dealing with this. If anything, it makes me more mindful and more diligent, more deliberate.”

“We’re thankful that we have our faith,” Kellie Sloot said. “It’s always gotten us through.”