On the mend from surgery, Father Bassano  eyes return to Africa

Father Michael Bassano, MM, has always loved Robert Frost’s poem about woodsy roads diverging. But Father Bassano himself is not confined to any woods. “We’ve taken to the road as it were,” he said. 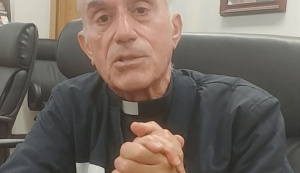 Writing poetry, Father Michael Bassano says, gives him a feel for his own journey of life — where God is leading him. (Sun photo | Tom Maguire)

Father Bassano grew up in Binghamton and was ordained a priest for the Diocese of Syracuse in 1975. He eventually became a Maryknoll missionary, and since 2013 he has served in the United Nations camp outside the town of Malakal in northeastern South Sudan, a country struggling from civil war. In 2015, fighting erupted in Malakal, and Father Bassano  dropped to the ground after hearing something — perhaps a stray bullet — whizz over his head. The UN camp has 28,000 IDPs (internally displaced people), and they live in close quarters, mostly in tents.

Going on home leave every three years gives Father Bassano time to think about where he has been. Presently he is at Maryknoll headquarters in Ossining, north of New York City, drinking a lot of water as he recuperates from kidney-stone surgery. He has just written a poem, “The Journey” (at right).

Father Bassano never took a poetry-writing course in college, but he did watch the movie Dead Poets Society: “That kind of got me motivated to write poetry too.” Sometimes he might be looking at nature or reflecting on the journey of life, and the poetry “just comes.” The Spirit sits him down and he moves with it and “the words start to flow.” He added: “You can’t plan those things, they happen. … It just gives me a focus.” He revises poems two or three times.

Very soon, he will be appearing in two segments on the talk show americanreal.tv. His interviewer for those segments is Roger L. Brooks, who was a fifth-grade student at the former St. Thomas Aquinas School when Father Bassano served in that parish in Binghamton. The school held dramas, and Father Bassano sang with his brother Ted and their late brother Paul. Asked about his singing, Father Bassano said, “Little bit of Frank Sinatra.”

Brooks, the founder and host of americanreal.tv, interviewed Father Bassano in his Binghamton studio where he uses five cameras. He said the unedited Father Bassano segments will air Aug. 12 and 19. Brooks will also publish the interview on YouTube, iTunes, and Facebook; visit www.thecatholicsun.com for the links.

“We had a wonderful conversation,” Brooks said, “and I asked him really about his whole upbringing and how he entered into the priesthood, and then his whole experience of becoming part of the Maryknoll group and then his whole missionary work. … He’s just a remarkable person.”

Brooks compares Father Bassano’s life to that of St. Francis of Assisi, whom he has researched while working on a novel. “I think we’re somewhat spoiled and we get comfortable in our lives; we’re fortunate to be here” in the United States, Brooks said. Hearing Father Bassano talking about people living in tents with dirt floors and no air conditioning in South Sudan, he said, made him stop and think and appreciate things. He added that we need people like Father Bassano to jolt us: “People need help, that’s why we’re here.”

By the end of August at the latest, Father Bassano will fly back to Juba, the capital of South Sudan, and then fly about 300 miles north to the UN camp outside Malakal to check in on the situation. The Maryknollers’ philosophy is to go where they are needed but not wanted, and stay until they are wanted but not needed.

And Father Bassano will occasionally write.

“Sometimes I feel a poem coming on,” he said.

In distant lands,
the mission field
where God is found
teaching me to yield

To your Spirit of delight
in what is seen
Compassion, my true friend,
on whom to lean.

In awareness of oneness
my heart entwined
with faces overcome
by trauma and worry lined.

Where my heart is
meant to be
growing with people
sharing life with me.