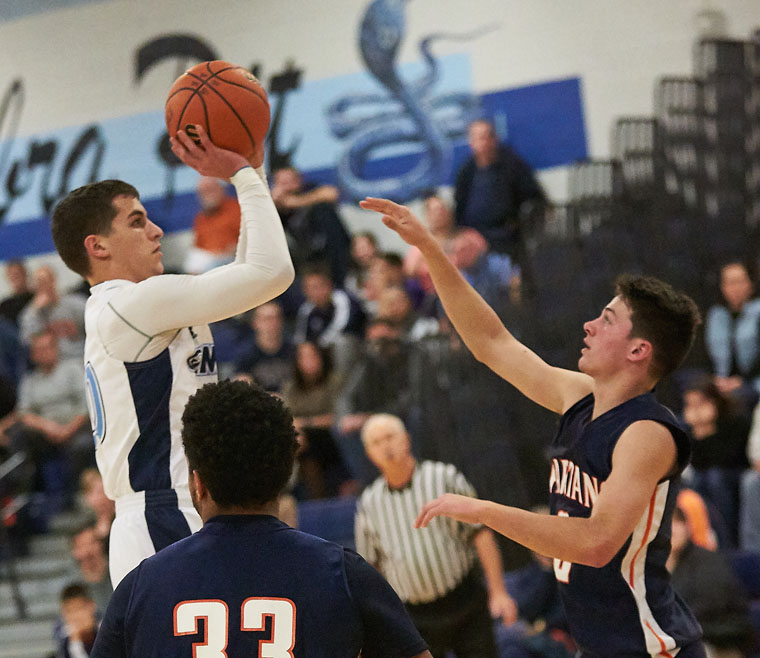 The Bishop Grimes Cobras boys basketball team began their season with new head coach Bob McKenney Nov. 27, bringing home an 84-54 victory over Mount Markham in their first-round game of the NBT Bank Tournament at Oneida. The following day, the Cobras defeated Vernon-Verona-Sherrill 82-62 to take the championship.

The game began about as lopsided as it could get. The Cobras opened up on fire, ending the first quarter with a 24-5 lead. The game then evened out quite a bit. With a second quarter score of 10-9 favoring ESM, the Spartans still had life and enough time to make a comeback. The third quarter proved this to be true, as the Spartans closed the gap to 46-32. Then, Lucci Vigliotti took over for Bishop Grimes. He finished with 20 points, which included two threes. Seniors Mark Shattuck, John Wike, and AC Ater also contributed double-digit scoring efforts. For ESM, Ty Barkins finished with 12 points and Corey Wolf had 13. The Cobras ended up on top, 68-48.

The Cobras went on to best Westhill 73-63 Dec. 4. They were slated to take on Institute of Technology Syracuse Central Dec. 8.

See photos from the home game here and more at thecatholicsun.com.

Paul Cifonelli is a junior on the Bishop Grimes boys basketball team.

Is there a game, meet, or match you’d like to see in the Sun? Want to help us expand our sports coverage by becoming a reporter? Drop us a line at sports@thecatholicsun.com.