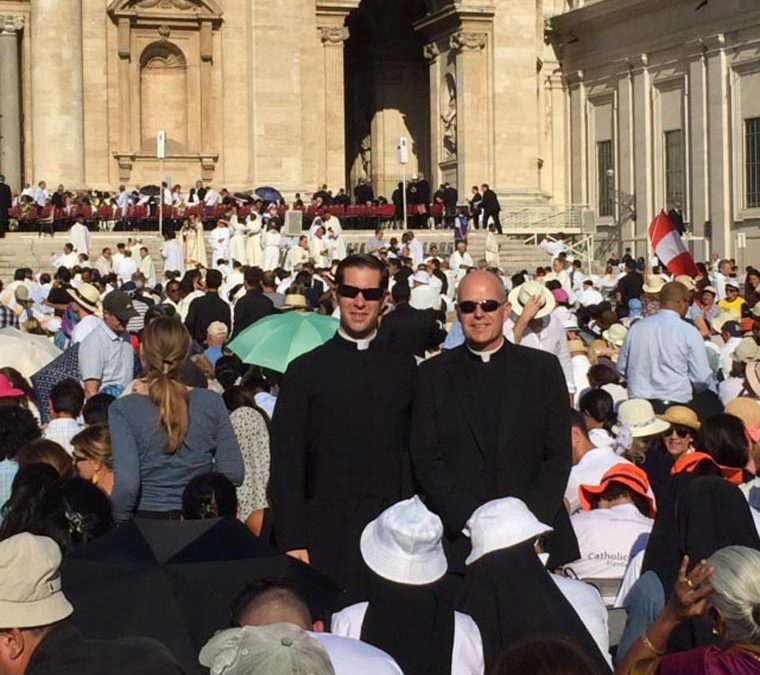 On September 4, 2016, I joined more than one hundred thousand other people who gathered in the eternal city of Rome for the canonization of yet another saint of our time: Mother Teresa of Calcutta.

It was a warm, sunny day and the excitement of everyone present was powerful. As I waited in line for three hours to enter St. Peter’s Square for the celebration, I heard many stories and testimonies of how Mother Teresa inspired faith in people’s lives. I also saw her Missionaries of Charity present along with many of the people they serve and thought how special this occasion must be for them. And I recalled the trailer for a recent movie that came out about Mother Teresa called, “The Letters.”

In this particular trailer the narrator said that Mother Teresa was one of the “greatest humanitarians who ever lived.” This struck me as odd because it seemed to suggest that she was simply a good person who did extraordinarily nice things for other people. But, it said nothing about her faith, which is what inspired her to be the beautiful person she was and to do the heroic things that she did. Sadly, I was not overly surprised by this assertion, given the fact that for so many people today, both Catholics and non-Catholics alike, following Christ is all about being a “good person” in general and doing nice things for other people.

For those of us gathered in the square, however, Mother Teresa was so much more. For us she was a woman of deep faith, especially because even when she experienced spiritual darkness she kept going. For us, she was a woman of profound holiness. For us, she already was a saint and we were there simply to hear our Holy Father, Pope Francis, officially declare this to be so.

This declaration began with the prefect of the Congregation of the Causes of Saints, Cardinal Angelo Amato, asking the Holy Father on behalf of the whole Church to enroll Blessed Teresa of Calcutta among the saints. Then, at the request of the Pope, the whole Church joined in prayer, singing the litany of the saints. After this, the Holy Father solemnly stated, “For the honor of the Blessed Trinity and the exaltation of the Christian faith and the increase of the Christian life … we declare and define Blessed Teresa of Calcutta to be a Saint … decreeing that she is to be venerated by the whole Church.” This was not only a powerful statement, but also a powerful moment. Those gathered cheered and clapped. A relic of the new saint was brought forward in procession and the ceremony culminated with the celebration of the Eucharist.

In his homily during the Mass of Canonization, Pope Francis himself suggested that Mother Teresa was much more than a humanitarian because what she did was more than human.  It was divine. She showed all those she served in a very real and tangible way that God loves them. Moreover, when she served them she was fully aware that she was serving Christ himself.  Therefore, he fittingly described her as a “worker of mercy.” How appropriate during this Jubilee of Mercy! The Church has a new saint who, having encountered God’s mercy in such a profound and real way, could not help but to extend it to others.

Being present at Mother Teresa’s Mass of Canonization to hear and experience all of this was a both a privilege and a joy. My first experience of her life and legacy was at the Gift of Peace House in Northeast Washington, D.C. There I volunteered to help her sisters, the Missionaries of Charity, during one Lent as part of my formation for the priesthood. This first experience later turned into a two-year commitment during which I taught the sisters themselves how to sing. I also directed their choir, which sang each year at the Basilica of the National Shrine of the Immaculate Conception for the younger sisters as they made their solemn profession of vows. And after being ordained a priest I occasionally celebrated Mass both for the Missionaries of Charity as well as for those in their care when I returned to the Catholic University of America for further study.

What I find so inspiring about these sisters is that — following the example their founder, Mother Teresa — they arise early every morning to do God’s work with smiles on their faces and joy in their hearts. Moreover, their charitable work is centered around prayer, the worship of God at Mass, and adoration of the Lord in the Blessed Sacrament. It involves devotion to the Blessed Virgin Mary and going to confession regularly. It includes studying our Catholic faith with zeal and living according to the teachings of Christ and his Church. And, it answers the call of Christ himself to serve “the poorest of the poor.”

Being present at the canonization of Mother Teresa and witnessing her work of mercy continue today through her Missionaries of Charity reminded me that a humanitarian she was not, but a saint she was. More importantly, it inspired me to try to better imitate her example of charity, which was inspired by and grounded in our faith. As she once said, “To be able to love we must have faith, for faith in action is love, and love in action is service.” Mother Teresa of Calcutta … pray for us!

This article was originally published in the Sun in 2016. Father Christopher R. Seibt is currently studying canon law at Theological College in Washington, DC.