N.Y. firefighters march, pray for peers as they recall events of 9/11 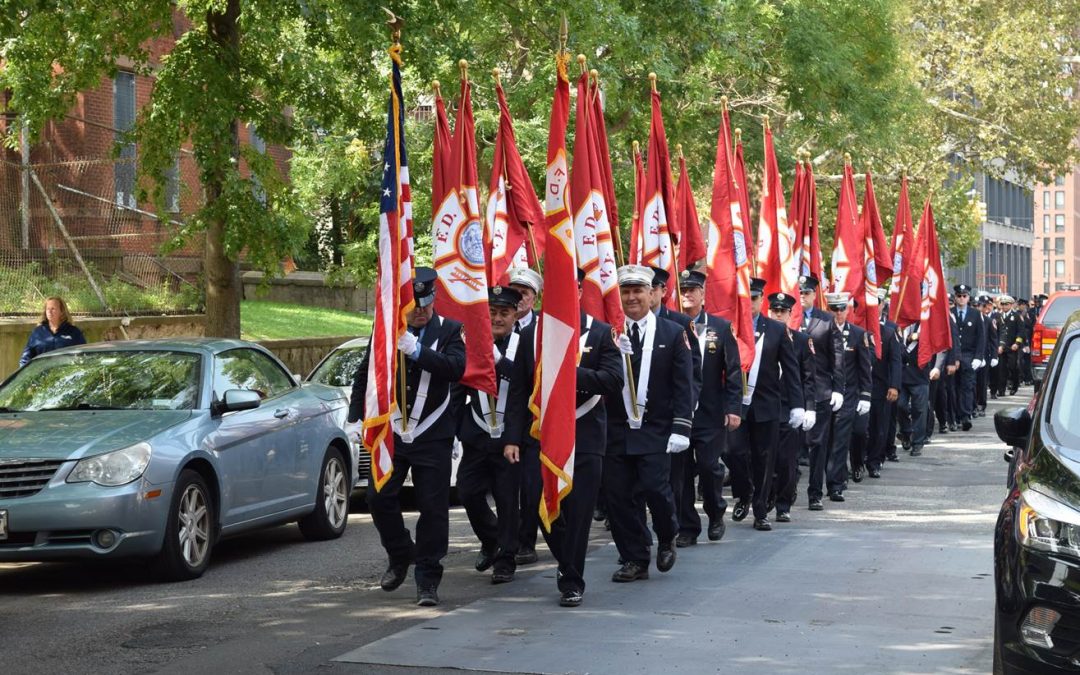 Father Sean Suckiel, vocations director for the Diocese of Brooklyn, celebrated the memorial Mass at the church, praying for those who lost their lives and blessing the first responders still on the job.

“That day we were shocked, we were wounded,” Father Suckiel recalled. “Evil that day has its moment of triumph. That was a day of horrific events that we must never forget.

“When truly challenged, we forget ourselves and we become men and women for others, men and women who are willing to give up their lives. In times of disaster, we are present for one another, we change, we become our best,” he said.

“Our hearts are always saddened by the events that took place on this day,” the priest continued. “But we must look back through a different point of view. Heroism is where we find Jesus. He shows us the way.”

Firefighter Keith McElwain remembered driving through the tunnel into Manhattan and “when we got out, the clouds of smoke were everywhere and most of us didn’t know the towers had fallen yet. But I knew my brothers were in there and I had to bring them home.

“As long as I can walk, I will be in this march,” he said. “It is a good feeling to see the younger guys joining in today, to see them carry the flags and help pass on the tradition. Today is just about having everyone together.”

Firefighter Thomas Palombo graduated from the fire academy in 2015. His father, Frank Palombo, a graduate of Cathedral Prep School and Seminary in Queens, was killed on 9/11.

“So many risked their lives to save thousands and it is an honor to know my father was a part of that,” Palombo said. “This is my fifth year marching and I love being a fireman. I cannot actually put it into words what today means to me and so many people. Carrying the flag means a lot because for me it is to remember my father and to bring him back to Brooklyn.”

“Every year the march seems to get a little tougher, but we keep going,” he said.

Twenty-three members of Battalion 57, located in the Bedford-Stuyvesant neighborhood, lost their lives at the World Trade Center.

“Of our battalion, we only recovered a femur of one firefighter. That was it,” Stark said.

“There was a sense of guilt for a long time that you weren’t one of the guys who died, but to the man none of us cared if we lived or died. We had to find our friends. It’s nice to see so many families still come out today and it shows how much love is out there.”

O’Connor is on the staff of The Tablet, newspaper of the Diocese of Brooklyn.