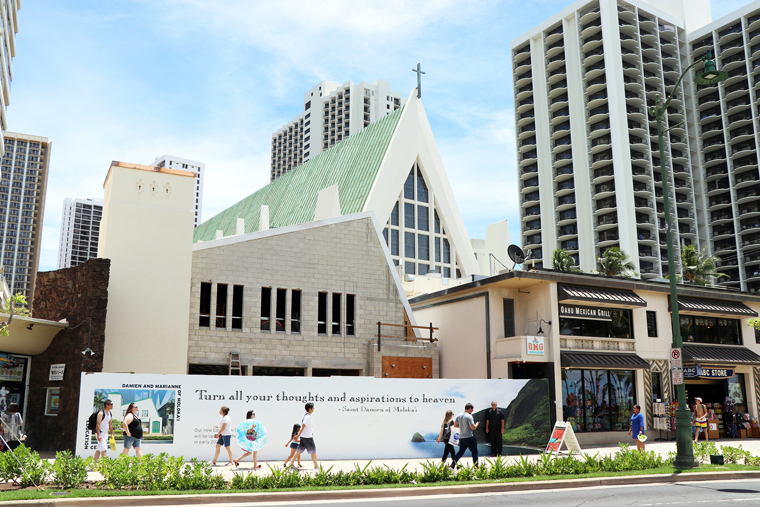 HONOLULU (CNS) — Sandwiched between a specialty store selling Hawaiian products and a shirt souvenir shop, a new building is going up near Waikiki Beach that also hopes to attract tourists, but not to buy trinkets and sunscreen.

The new building will “sell” an education on Hawaii’s two saints and their ministry to people with Hansen’s disease on Molokai’s Kalaupapa peninsula to visitors and locals alike.

The two-story Damien and Marianne of Molokai Education Center fills a narrow space fronting St. Augustine by the Sea Church property. Where there once was a driveway, parking area and small courtyard, there’s now a brick edifice and tower that mirrors the design of the A-frame church.

A temporary construction barrier separates the in-progress center from the heavy foot traffic on the street across from Waikiki Beach. A quote from St. Damien runs along the wall. “Turn all your thoughts and aspirations to heaven,” says the religious message amid the tourism ads.

It’s difficult to get to the remote Kalaupapa peninsula on Molokai, where those suffering from leprosy were forcibly sent from the late 1800s until the mid-1900s. Many Hawaii visitors and residents who will never make it to Molokai will be able to visit the Waikiki museum.

“The vision of the center is keeping sacred and really sharing that story of Damien and Marianne to the world,” Fay Pabo, St. Augustine’s administrative assistant, told the Hawaii Catholic Herald, newspaper of the Diocese of Honolulu.

Once it opens in early 2020, the $6 million, 5,900-square-foot education center will be open six days a week with a small admission charge. A few paid staffers along with volunteer docents will run the museum and guide visitors. The center also will be available to host events for outside groups in the building and at an adjacent reflection garden.

The groundbreaking for the project was April 15, 2018, with construction starting several months later. The building should be completed this fall with interior and exhibit design coming next.

Planned displays will include photos and artifacts relating to the saints and the residents along with written content, videos and interactive exhibits. A small chapel and a gift shop complete the space.
Among the initial artifacts showcased at the center will be a chalice, walking sticks and carpentry tools belonging to St. Damien that are a part of the Sacred Hearts order’s archives. Rotating exhibits will supplement the permanent displays.

St. Augustine Parish has spoken with the National Park Service in Kalaupapa about using some of its extensive patient collections in the future as well. Father Akiona also hopes to travel to St. Damien’s home country of Belgium in October and speak with curators of the saint’s collections there about the potential for a future artifact loan program. Much of St. Marianne’s artifacts are in Syracuse, New York, where her Franciscan community is based and the hope is for more collaboration there too.

Father Akiona said the center will work with the Cathedral Basilica of Our Lady of Peace to encourage visitors to head to the downtown Honolulu cathedral where St. Damien was ordained a priest and where first-class relics of the Belgian saint and St. Marianne are housed.

A need to better tell the story of the two saints has long existed. Plans on how to do so accelerated after St. Damien’s canonization in 2009 and St. Marianne’s in 2012.

A Damien and Marianne Heritage Center above the specialty store in the building that fronts St. Augustine lasted from 2010 to 2013, closing because of a rent hike. Prior to that, a Damien Museum at St. Patrick Monastery in Kaimuki and then at St. Augustine showcased photographs and artifacts relating to St. Damien.

Father Akiona knew there was plenty of demand for a new museum because the former heritage center saw about 40,000 visitors a year with minimal advertising and a lot of foot traffic off Kalakaua Avenue.

“I think for me the excitement is the fact that it’s now reality, it’s happening,” he said of the new building. Being from Molokai and a member of the same religious order as St. Damien adds a personal dimension to his investment in the project.

He emphasized that such a center has long been a vision of members of St. Augustine Parish. Repeat visitors to the parish over the years have been tracking the project too.

An additional $3 million needs to be raised to cover the center’s interior design and exhibit space. Fundraising is underway to complete the project.