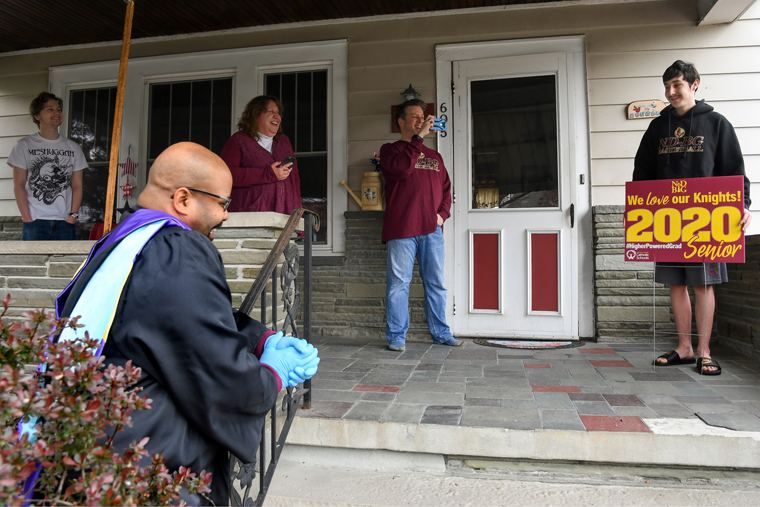 Prom is canceled, graduation ceremonies are postponed, and last goodbyes are being told through phone and computer screens. It’s not the send-off most kids had in mind, but school leaders around the country are trying to bring some cheer and attention to these students in this challenging time by personally dropping off notes or signs.

Faculty members of Notre Dame-Bishop Gibbons High School in Schenectady jumped on this new tradition by surprising the 43 students of the senior class with graduation signs of congratulations. Teachers and staff drove to each student’s home across five different counties to deliver the signs and congratulate them on the milestone.

“I’ve taught most of them since they were middle schoolers,” said Richard Harrigan, history and information technology teacher at Notre Dame-Bishop Gibbons. “I’ve watched them go the whole way through. It breaks my heart having to do this but it’s important we continue doing things like this.”

On May 1, Governor Andrew Cuomo announced that all schools in New York State would be closed for the rest of the year as part of a number of restrictions to curb the spread of the coronavirus. Kiante Jones, principal of Notre Dame-Bishop Gibbons, said that the students have “shown such resilience” in the wake of all the changes.

“With us closing, and then the extended closures so unexpected for the school community, I think the kids have done an amazing job.”

Harrigan added that after the governor’s announcement, he “must have talked to half of the senior class” about the decision. “It was really hard. So I think it will be good to see each other for that reason, to show we’re still in this.”

The idea for bringing signs to the seniors was a collaboration between Albany’s four diocesan high schools and the Catholic School Office. The diocesan office helped design the signs and covered all the costs, ensuring each high school graduate would get one. Notre Dame-Bishop Gibbons was the first school to drop off the signs to the seniors in the diocese, with the three other schools following up at later dates.

“I think, like a lot of other schools, we’re looking for gestures to let our seniors know that we’re still thinking about them, that graduation is still a special experience and to preserve it as much as possible despite how depressing this is,” Harrigan said. “These are social milestones in our American society we all look toward, and they might have them taken away through no fault of their own.”

Patrick Moran, the school’s athletic director/assistant principal, joined Jones in delivering signs to this year’s valedictorian, Connor Barber, and salutatorian, Noah Decker. Barber will be attending Providence College in Rhode Island and Decker will be attending the Rochester Institute of Technology in New York.

Barber was shocked when he stepped outside his home. His family clapped and cheered as Jones and Moran, both dressed in the school’s academic regalia, presented Barber with his sign and congratulated him on all of his work.

“This is awesome. I was not expecting this,” Barber said, holding up his sign. “It’s so cool, it’s nice to see everyone again. I haven’t seen anyone in so long, it’s just really nice.”