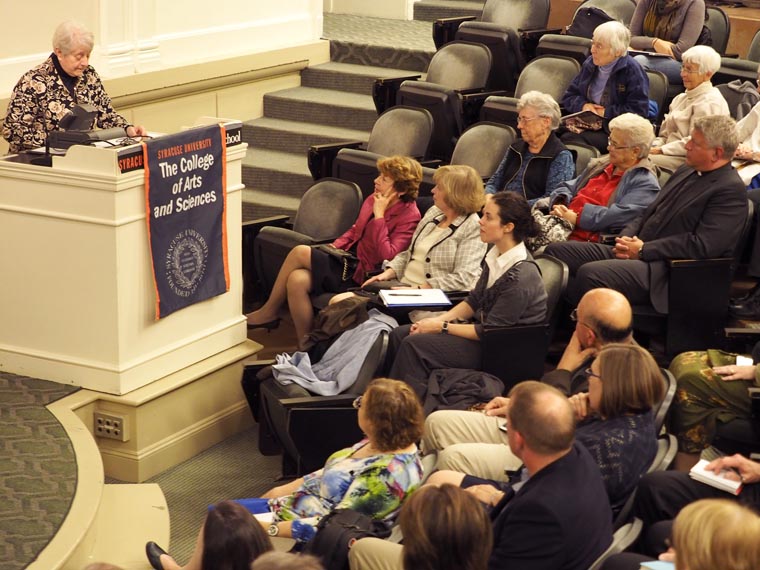 Anyone expecting Dr. Sandra M. Schneiders, IHM, to list the social-justice work of women religious in her talk Oct. 10 at Syracuse University would have been surprised.

Dr. Schneiders, a theologian, is an author and professor emerita of New Testament studies and Christian spirituality at the Jesuit School of Theology of Santa Clara University in Berkeley, Calif. The school is part of the Graduate Theological Union.

She gave her talk, “What Are Nuns Really Up To?,” as part of the annual Joseph and Amelia Borgognoni Lecture in Catholic Theology and Religion in Society.

“Most people are not very knowledgeable about sisters,” she told the crowd of about 100. People think nuns are the workhorses of the church, women who have failed in other occupations or wannabe priests, she said in a presentation punctuated by laughter from the audience. “They are not branches of the Vatican or Father’s little helpers.”

Everyone in ministry is called to make real God’s plan for the world, Dr.  Schneiders said. Women religious fix their heart on God, renounce all possessions so all things can be held in community, and thus work toward construction of an alternate world. They follow Jesus, who lived a celibate, possessionless, homeless life, she said.

“Religious life is an attempt to live the salvation Jesus came to inaugurate in the here and now,” Dr.  Schneiders said. Because of that, sisters often work with people marginalized by society, she told the audience of academics, nuns, priests, students, and the general public.

“This is not just philanthropy or even idealism or altruism,” she said. “They are in and for the world as Jesus was and because Jesus was.” The sisters might have utopian projects that fall short, but that failure is incentive to continue to repent and revise their plans, she said. By living their lives this way, they are preaching the Good News, she said to extended applause.

Dr. Schneiders spoke for about an hour, then answered questions and responded to comments, mostly about how to help young people find meaning and discern their spiritual path. At the conclusion of her presentation, she received a standing ovation.

“There’s a profound quest by young people for meaning,” Dr. Schneiders said. It is evidenced in volunteerism and communal living. “How can we meet young people where they are? How can we really hear their questions?” she asked. Adults must articulate their values and give young people role models, she said.

Young people not only want meaning, but they also want to be happy, and that’s a God-given quest, Dr. Schneiders said. Adults must bridge the communication gap and “learn the lingo” of youth.

She addressed the Vatican’s investigations of women religious in the United States from 2008 to 2015 and concluded the investigations had a positive effect by increasing secular interest in sisters.