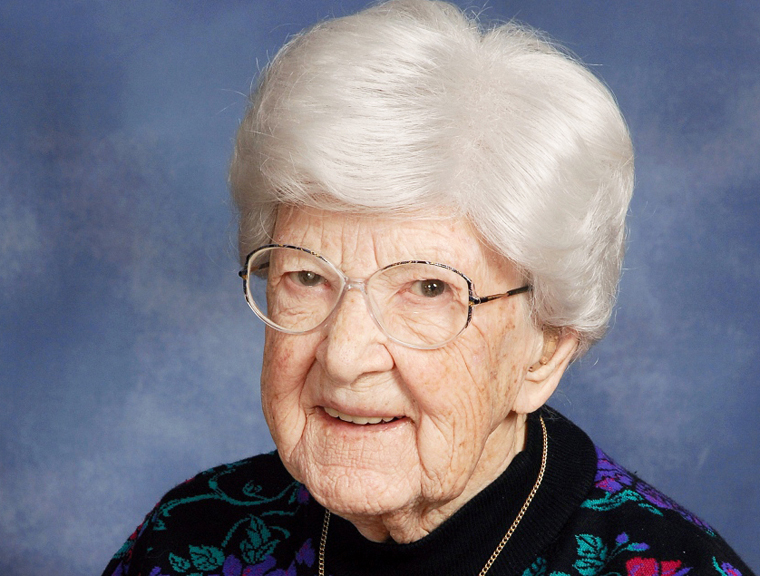 Sister Frances was born in Paterson, N.J., on Oct. 30, 1921, daughter of the late Francis and Louise O’Brien Eustace. After graduating from Lyndhurst (N.J.) High School, she attended Douglass College of Rutgers University and Rensselaer Polytechnic Institute where she met the Sisters of St. Joseph. From 1943 to 1944 as part of the World War II effort, Sister Frances worked as an aeronautical engineering assistant at Curtiss Wright Corp. which was, at that time, the largest aircraft manufacturer in the United States, supplying planes in large numbers to our armed forces.

On March 19, 1945, Sister Frances entered the novitiate of the Sisters of St. Joseph; she professed final vows on Aug. 15, 1950. She received a bachelor’s degree in English from The College of Saint Rose, a master’s degree in English Literature from The Catholic University of America and a Ph.D. in English Education, also from CUA. In addition, Sister Frances received training in clinical-pastoral education at St. Peter’s Hospital, Albany, and St. Peter’s Hospital, New Brunswick, N.J., and studied ministry enrichment and pastoral care at Chestnut Hill College in Philadelphia.

Sister Frances spent her first 10 years as a Sister of St. Joseph as a teacher of English in high schools of the Albany and Syracuse dioceses, including in Syracuse, St. Patrick’s High School. After completing her doctoral studies, she was a professor of English at The College of Saint Rose where she also served as department chairperson.

Sister Frances later used her clinical-pastoral training in New York City and New Jersey, and also at St. Rose of Lima Parish, Syracuse, and by volunteering at St. Joseph’s Provincial House as a member of the staffs in both the archives and the infirmary and in the province’s social-justice endeavors.

The Sisters of St. Joseph was founded in 1650 to discern and respond to the most crucial needs of the times in a way that brings about unity and reconciliation, and Sister Frances was a Sister of St. Joseph to the core of her being. She “rolled up her sleeves” and responded generously to students in need of an education, to the elderly in need of comfort and care, to persons with AIDS in need of a listening heart, to the addicted in need of hope and encouragement, and to the homeless in need of respect and hospitality.

Sister Frances was a natural at building bridges as she furthered Jesus’ mission, and she embraced every effort with great joy, passion, and energy. In her enthusiastic response to present needs and her clear and far-reaching vision for a future based on Gospel justice, Sister Frances made an enormous difference in the world.

Sister Frances is survived by several beloved nieces and nephews and their families; by many dear cousins and friends; and by the Sisters of St. Joseph of Carondelet. In addition to her parents, Sister Frances was predeceased by her brothers, William Eustace and Father Francisco Eustace, OFM; and by her sister, Patricia Fallon.

Sister Frances’ Mass of Christian Burial was held in the chapel of the Provincial House on June 25.

Donations in Sister Frances’ memory may be made to the Development Office, Sisters of St. Joseph, 385 Watervliet-Shaker Road, Latham, N.Y. 12110.