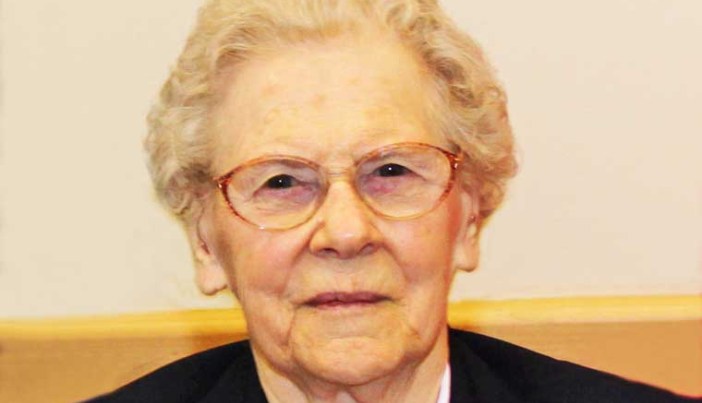 Sister Margaret Paul Scrodin, CSJ, 97, died Thursday, June 14, 2018, at St. Joseph’s Provincial House, Latham. She had been a Sister of St. Joseph of Carondelet for 75 years.

Sister Margaret Paul, the former Margaret Barbara Scrodin, was born in Hudson, N.Y., on Dec. 12, 1920, daughter of the late Paul and Margaret Morgan Scrodin. After graduating from St. Mary’s Academy, Hudson, she entered the novitiate of the Sisters of St. Joseph on March 19, 1943, and professed final vows on August 15, 1948.

Sister Margaret Paul received a bachelor’s degree and a master’s degree, both in elementary education, from The College of Saint Rose. For 45 years, she taught in schools of the Albany and Syracuse dioceses; in the Syracuse Diocese: St. Patrick’s School, Utica, and Christ the King School, Endwell. In addition, Sister Margaret served for 16 years as manager of Central Supply at St. Joseph’s Provincial House.

Sister Margaret Paul was an educator in whom subject-matter expertise combined with effective teaching skills and a kind, patient personality to produce an environment conducive to learning and respect. She took great joy in her students’ academic, social, and spiritual achievements. Throughout her life, Sister Margaret was devoted to her family, enjoying their visits and news of their growing families and supporting them with her prayers. With her quiet but pervasive spirit of adventure, she delighted in traveling with Sister Genevieve Therese Murphy to such places as New York City; Colorado; Cape Cod, Mass.; and later to Sacandaga Lake, Saugerties, and places closer to home. Like St. Joseph, her patron, Sister Margaret was hard-working, humble, and happy to remain in the background, and her presence among the Sisters will be dearly missed.

Sister Margaret Paul is survived by one brother, Benjamin Scrodin; by two sisters, Genevieve Van Tine and Bernadette Orr; by several nieces and nephews and their families; and by the Sisters of St. Joseph of Carondelet, with special mention of her beloved friend, Sister Genevieve. In addition to her parents, Sister Margaret was predeceased by her brother, Paul Scrodin; and her sisters Mary Ann Scrodin and Eva Helen Egan.

Sister Margaret Paul’s Mass of Christian Burial was celebrated in the chapel of St. Joseph’s Provincial House, Latham, on June 18.

Donations in Sister Margaret Paul’s memory may be made to the Development Office, Sisters of St. Joseph of Carondelet, 385 Watervliet-Shaker Road, Latham, N.Y. 12110.