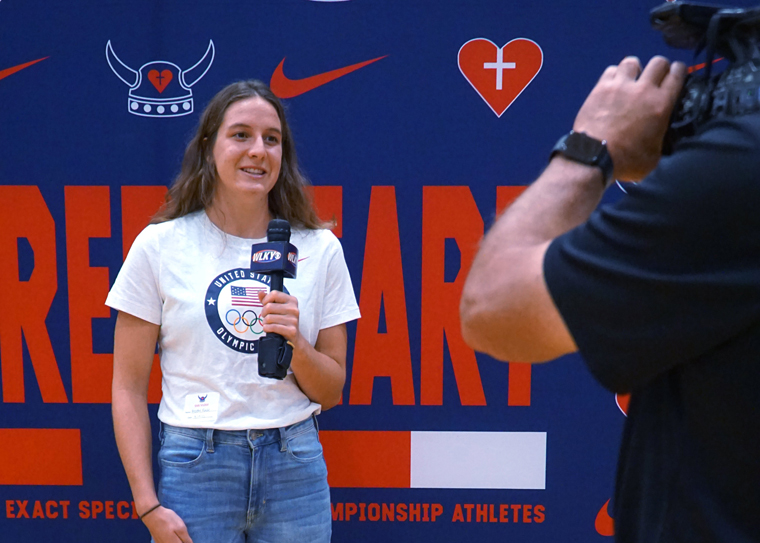 LOUISVILLE, Ky. (CNS) — Olympic silver medalist Brooke Forde returned to her alma mater, Sacred Heart Academy in Louisville Aug. 19 to talk with other Valkyries about her experience in Tokyo.

The 2017 graduate of the all-girls Catholic high school, as self-effacing and humble an Olympic hero as anyone could find, spoke to more than 800 students in the school’s gym. And she told them about the first thing she did when she returned home with her medal.

“I hung it on my cat’s neck,” she said. “The medal is at home in my bedroom, and yes, it’s heavier than I thought it would be. I probably should find a better place for it.”

Forde is 22 and will be returning to Stanford University for a one-year master’s degree program in epidemiology this fall.

Then, who knows? Medical school is a possibility, and so is spending a year in the Peace Corps in Peru.

“You have to be open to new things and new experiences,” she told the assembly.

The Tokyo Olympics was the culmination of a lifetime dream, said Forde.

“The Olympics is the pinnacle of my sport,” she noted. “I’ve had the good fortune to swim for a good club (Lakeside) and on high school championship teams and then swim in college. All those years I had people who came before me who I’d looked up to.”

Then all of a sudden she realized that she had become one of those people.

“I’m still trying to process all of this,” she said with a chuckle.

During the assembly, Forde responded to questions from senior Reese Quinlan, president of Sacred Heart’s 100 Club. One query asked how Forde dealt with the pressure of Olympic competition.

“I remember sitting in the ready room trying to process things,” she said. “I told myself, ‘Hey, you’re swimming in the Olympics; this is a big deal.'”

That big deal resulted in Forde being part of the four-member team that took silver in the 4×200 relay. After the event, she said, she was not only happy but “proud that I did my job in helping my teammates.”

“So, did you get a lot of cool stuff?” Quinlan asked.

“Yeah, I did,” Forde said. “I left home with one suitcase and came back with four. It’s all USA stuff, so I’m set for the Fourth of July for the rest of my life.”

Quinlan recalled that in 2017, Forde was voted by the student body as the swimmer most likely to become an Olympian. Sacred Heart, by the way, has won 10 of the past 11 state swimming championships.

“I don’t know if I took it all that seriously back at that stage of my life,” she recalled. “I’ve been lucky enough to achieve some of my goals. I wanted to swim in college; wanted to be on the national team. I don’t think I said, ‘I want to be an Olympian,’ until about two months before the Olympic trials began.”

As for advice for the students before her, Forde kept it simple.

“Be open to change when you get to college,” she said. “Keep an open mind and be prepared for college to challenge you. Don’t be afraid to get involved in different stuff.”