‘One groovy nun’ speaks in Syracuse 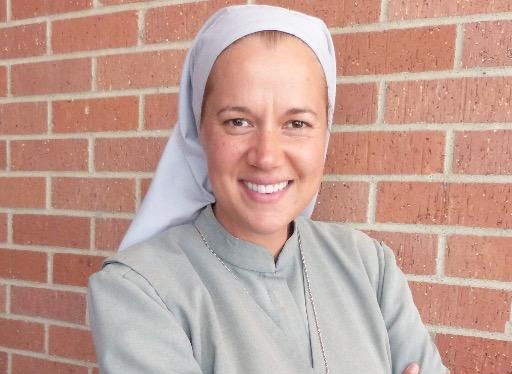 Sister Miriam James Heidland, talks to teens and parents about addiction, volleyball and the love of Jesus

When you see Sister Miriam James Heidland, known as “one groovy nun,” on Twitter, groovy isn’t generally the first word that comes to mind. Clad in a pale grey Sister of Our Lady of the Most Holy Trinity (SOLT) habit and sensible shoes, Sister Miriam seems far removed from the popular college volleyball star she once was 17 years ago. But as she shared her personal story with parents and teens at Holy Family Church in Syracuse on Nov. 5, groovy would be just one word to describe her; brave would be another.

Sister Miriam, who also was a featured speaker at the recent Catholic Women’s Conference, took time out of her speaking schedule to talk honestly with teens and parents about her battle with alcohol addiction, her feelings of being unloved as a youth and how her life changed when Jesus called her to religious life.

“I never thought about being a nun growing up,” stated Sister Miriam with a laugh. “I was all about sports. I loved playing volleyball and my future goal was to work at ESPN. That was the prize I had my eye on.”

As an adopted teen, Sister Miriam struggled often with low self-confidence despite having a gift for athletics. She shared that through her high school years and even as she headed off to college on a scholarship to play volleyball, she was still searching for something to fill an empty spot in her heart.

“I was hungry. I wanted something more but I didn’t realize what that something was,” explained Sister Miriam. “I ended up trying to find other things to fill that empty place.”

Sister Miriam spoke about her addiction to alcohol and choices she made during her college years that created distance and friction with her parents. “It was a dark time for me. I would often sit and wish for death because I was certain there was no way anyone, especially God, could ever love me.”

Just as it seemed her life was spiraling out of control, a priest on the college campus befriended Sister Miriam and became a spiritual mentor to her. “If you ever met a holy person and you see how much they love God, you can understand how I felt when I met my mentor. I would see the love of God on his face and I would think, ‘I want that.’”

It was at this time of great personal challenge that Sister Miriam heard Jesus call her very clearly into religious life.

“I needed to do a lot of work but I knew the path that Jesus wanted me on. It was the love of Jesus and the love of God that I had been hungry for and it was this love that finally filled that empty hole inside my heart. It was true authentic love and my heart has never been empty since I accepted the love of Jesus.”

Following Sister Miriam’s talk, students were given a chance to ask questions and enjoy refreshments hosted by the Catholic Women’s Commission and the LifeTeen group at Holy Family.

Brigid Clary, a youth minister at Holy Cross Church in DeWitt was deeply touched by Sister Miriam’s story and wished that more teens from her program had attended. “I have never heard a presentation that spoke so honestly to teenagers. Her story had so many things to say that I wish my group could have heard her. I think she’s fantastic.”

Beth Hunter, 17, a student at Westhill Senior High School in Syracuse, was also impressed with Sister Miriam. “She really surprised me with what she had to say and how open she was. She was really neat. She’s a pretty cool nun.”

Sister Miriam speaks to teens and groups across the country on faith and the authentic love of God and Jesus. Follow her on Twitter @onegroovynun.