‘One of the most incredible things that I have ever witnessed’ 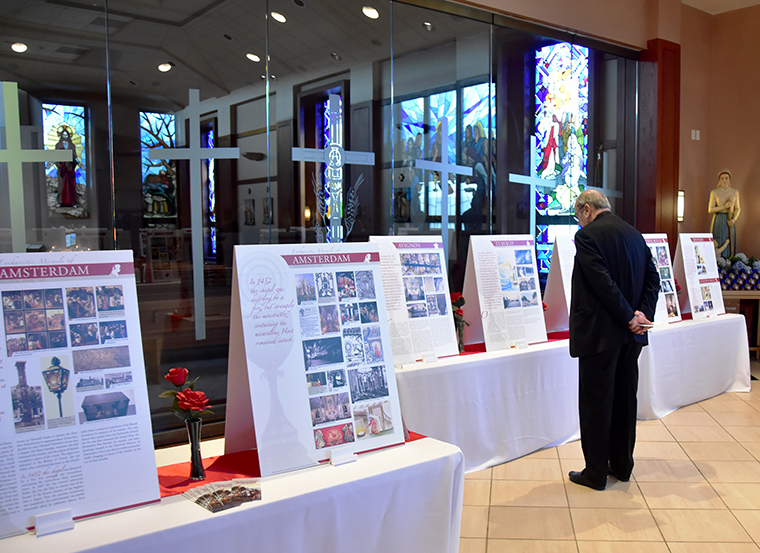 The Eucharistic Miracle of Montserrat is one of the approximately 65 poster-size panels, designed and created by Blessed Carlo Acutis, viewable by the public until Oct. 16 at Holy Cross Church in DeWitt. They are part of the International Exhibition of the Eucharistic Miracles of the World. Bishop-emeritus Robert J. Cunningham, who paid a visit on the day it opened, Sept. 14, said the beautiful thing about the exhibit is that it spans the centuries, including before the Middle Ages, in the Middle Ages and in the present time.

The Montserrat miracle occurred in 1657 in Spain. The panel gives this account:

A girl begged an abbot to celebrate three Masses for her late father in order to free his soul from the pains of purgatory. At the first Mass, the girl confirmed seeing her father kneeling surrounded by flames during the consecration. The dubious clerics asked the girl to put a tissue close to the flames that surrounded her father in order to verify her story. The girl put the tissue into the fire, which only she could see, and the tissue began to burn with a lively flame.

Https://www.holycrossdewitt.org/emotw explains: “The exhibition was designed and created by Blessed Carlo Acutis, who died from leukemia at the age of 15 and was beatified in 2020. Carlo’s exhibition presents a selection of the main Eucharistic Miracles recognized by the Catholic Church that have occurred over centuries in various countries around the world. The exhibit is free to attend and open to the public daily.” Check the website for a complete listing of exhibit times.

Holy Cross Church actually has about 165 panels but a team began to see themes and picked out the approximately 65 that are on display, parishioner Regina Harty said on opening day when she and other team members, including Sharon Scheibel, kept an eye on the exhibit.

‘The desire of his heart’

Harty said the panels were acquired from a Chicago printer who has printed them for churches around the country. “The desire of his heart,” Harty said of Blessed Carlo, “was to have this all over the world, have people know about the real presence of Jesus in the Eucharist.” PDFs of Carlo’s compilations of the miracles are available for free download at http://www.miracolieucaristici.org/en/Liste/download.html.

Father John Kurgan, pastor of Holy Cross and vicar general of the Diocese of Syracuse, said in an email:

“We became aware of the existence of the Eucharistic Miracles Exhibit, which was assembled by Blessed Carlos Acutis, because a parish in Florida was sponsoring the exhibit this past winter. A Holy Cross parishioner who visited the exhibit in Florida came to me and asked if we could borrow that exhibit. As we thought about it as a ministerial team we realized that we could purchase the entire exhibit and share it with parishes throughout the entire diocese.

“People who have visited the exhibit have been moved and I believe the ability to see pictures of, and read about, these Eucharistic Miracles during this three-year Eucharistic Revival will help deepen the faith of those who visit the exhibit and deepen the respect that we all have for the Holy Eucharist.”

A flyer says: “The exhibition will amaze and astound you. Consecrated hosts that take on the visible form and scientific nature of flesh and blood that relate to a man who suffered great torture. Other hosts stopped fires, floods, enemies and more through the miraculous power of the Eucharist. Hosts were stolen, desecrated, taken by non-believers and emitted great light or floated mysteriously in the air.”

Bishop Cunningham said he saw the exhibit within the context of the Eucharistic Revival sponsored by the U.S. bishops. “I think this is another means of increasing devotion to the Eucharist,” he said. “I think a lot of people have heard of one or another of the miracles associated with the Eucharist; very few people have heard of all of them. Certainly some of the miracles explained there I had not heard of before. So I think it’s a great educational opportunity but education leads you to, hopefully, deeper faith, adoration” and a greater appreciation of the Eucharist. 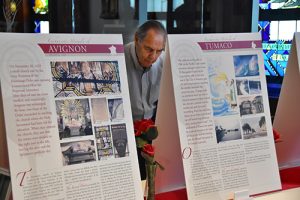 Ksander said: “The fact that this is so international and universal says something about how all of us are connected in that mission of Jesus. … And we are all the body of Christ.”

Asked what impressed her about the exhibit, visitor Fran Burton of Christ the King Church in Liverpool said, “The young man Carlo Acutis and just in thanksgiving that he put together all this for the faithful to really appreciate.” She and her brother-in-law, Ed Morris of Our Lady of Pompei in Syracuse, agreed that the main lesson of the exhibit is that “God is real.”

‘Take the time to think’

“This is probably one of the most incredible things that I have ever witnessed,” said Holy Cross parishioner Carol Holt. She added that if people “take the time to think about what they’re witnessing I think it will change the belief of a lot of people.”

“There is nothing more beautiful than to see the actual body and blood of Jesus Christ,” said exhibit viewer Joyce Kotch, from Holy Cross and also from St. John the Baptist Ukrainian Catholic Church in Syracuse. One of the Eucharistic miracles described in the exhibit (the host visibly turning into flesh and the wine into blood during the consecration) occurred in the year 750 in Lanciano, Italy, a site that both Kotch and her friend Roslynn Verginio, of Sacred Heart Church, Cicero, have visited.

One of the panels, citing a miracle in 1227 in Italy, tells of a mule that “despite the fact that it was exhausted by hunger, knelt before the Host and refused its food.” Verginio said she found it “very, very interesting” how animals “respected God more than you see some people on earth. … Animals know more than the people.”

Visitor Judi Conger belongs to the Legion of Mary at St. Ann’s Parish in Manlius. She anticipated the Legion giving its end-of-the-year report to the pastor the next day. “And I’m going to talk this up,” she said of the exhibit, “because how could you not want to see this?”