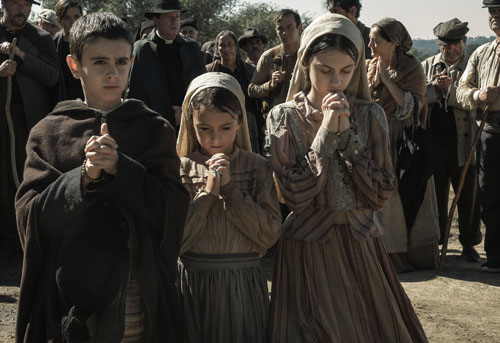 NEW YORK (CNS) — Moviegoers anticipating the feature film about the story of the children of Fatima will have to wait a few more months to see the famous miracle story on the big screen.

The historical drama, directed by Marco Pontecorvo and distributed by Picturehouse, was originally scheduled for widespread release April 24, the second Friday of Easter. But like many films slated for this spring, “Fatima” was pushed back because of the coronavirus pandemic.

“The circumstances that the world finds itself in now require precautionary measures and action,” the film’s official Facebook profile posted March 19. “As a result, we are postponing the opening of ‘Fatima’ in theaters to Aug. 14, 2020.”

In 1917, the three young shepherds reported receiving visions of Mary near the town of Fatima, Portugal. While the children’s testament inspired thousands of believers, it also incited anger from government officials and put their lives at risk. Jacinta and Francisco, who fell victim to the global flu pandemic of 1918, were canonized in 2017. Lucia, who became a cloistered Carmelite nun in Portugal, died in 2005 at age 97.

While some distribution companies have opted to make their spring titles available via streaming, such as “Birds of Prey,” “Trolls World Tour” and “Emma,” “Fatima” has followed the path of blockbuster titles whose release dates have been delayed entirely, including “No Time to Die,” “Mulan” and “Wonder Woman 1984”).

Bob Berney, CEO of Picturehouse, told Angelus, the online news outlet of the Los Angeles Archdiocese, that once movie theaters announced widespread closures, “we really had no choice” but to reschedule release. “We really felt that this movie is about community, and we believe that the theatrical experience is the best way to see the movie,” he said.

If that weren’t reason enough, the fact that the film’s producers are based in Rome and unable to travel to spring premieres secured the decision.

According to Berney, the new date for releasing the film was partially inspired by its proximity to the feast of the Assumption, which is Aug. 15.

A news release summarizing the production of “Fatima” emphasized the prominence of the story that turned a small Portuguese town into a major pilgrimage site.

“The power of its legacy has brought together an eclectic international group of cinema artists who believe that Fatima’s miraculous message of faith and peace, which galvanized the world over a century ago, is more important than ever,” the release said.

As a remake of the 1952 Warner Brothers film “The Miracle of Our Lady of Fátima,” this movie seeks to make the story newly accessible for a modern audience. “To tell this story like it was told in 1952 wouldn’t work today,” producer Rose Ganguzza stated in the news release. She explained that putting the events of Fatima in the context of early 20th-century Europe, which was embroiled in military conflict and religious violence, is crucial.

In the months leading up to the film’s new release date, Berney told Angelus the “Fatima” publicity team will take advantage of the extended timeline to launch “a broader and richer grassroots movement,” mainly via social media, to raise awareness about the film.
“Given the fact that people can’t go anywhere right now gives us an opportunity to show key people the movie so that they’re more prepared to talk about the movie,” he said.

Despite the series of disruptions, Berney remains confident that “Fatima” will still have a widespread positive impact.

“The message of the film, which is really peace and hope and praying, seems more relevant than ever,” he told Angelus. “I think the crisis we’ve been through will make people more attuned to the message.”