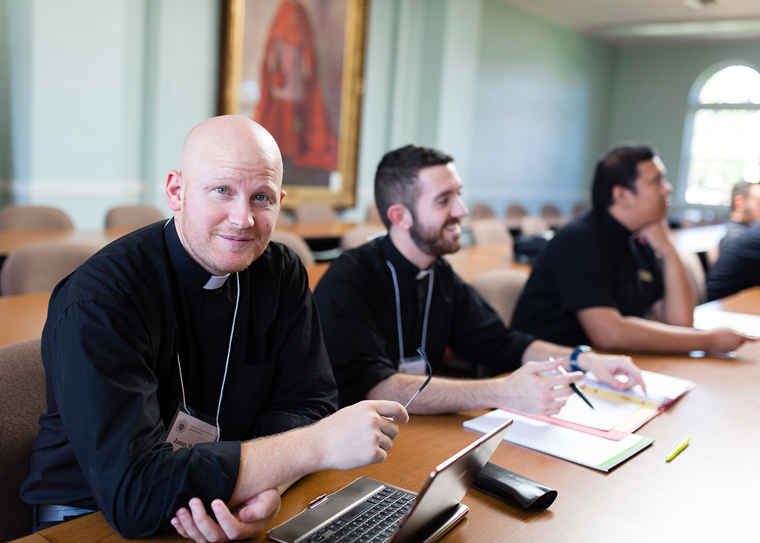 CHICAGO (CNS) — About 100 ordinations were scheduled to occur this year in the nation’s 87 mission dioceses supported by Catholic Extension, but the coronavirus has changed everything and left a cloud of uncertainty.

Dioceses around the U.S. anticipate that state pandemic-related lockdown measures will extend into May and are pushing back their plans, while others are still weighing their options.

Many seminarians in the mission dioceses have returned home. Some students have no home to return to and have struggled to find a location to shelter-in-place during this time of social distancing. Many have been continuing their studies with online courses.

“I have spoken with a few of the men regarding the online courses and they would much rather be in an actual class. This is especially true for those set to graduate this year, who typically relish these last weeks of fraternity with their classmates,” said Father Felipe Pulido, who is vocations director for the Diocese of Yakima, Washington.

Catholic Extension raises and distributes funds to support U.S. mission dioceses, many of which are rural, cover a large geographic area, and have limited personnel and pastoral resources. In the past five years alone, the organization has helped poor dioceses support the education of nearly 500 seminarians across the country by contributing more than $12 million.

The Diocese of Yakima will not postpone their two ordinations this May, which includes Deacon Edgar Quiorga, a fourth-year seminarian, as a priest, and Michael Kelly as a transitional diaconate. But, Father Pulido explained, this will not be a normal ceremony.

“Ordinations will comply with the regulations that are in place,” requiring social distancing and gatherings of fewer than 10 people, he added. “Both ordinations will include the immediate family of the seminarian playing a role in Mass and both will be livestreamed.”

In the Diocese of Juneau, Alaska, which also is a mission diocese and has had few ordinations in recent years, church leaders told Catholic Extension they are trying to decide how to proceed with the ordination they were “joyfully anticipating” this year.

The lone 2020 candidate for priestly ordination, Deacon James Wallace, is at home with his family in Los Angeles, far from Alaska, as he finishes up his semester online.

“At this point everything is on hold for him and his presbyterial ordination,” said Father Michael Galbrath, Juneau’s diocesan vocation director. “We will have to see how the state of Alaska does in opening things up before we can make a final decision on the date of his ordination. We originally had it planned for June 19, but we will leave that up to the bishop to decide if we postpone or go ahead with this date.”

Things are similarly fluid in the Diocese of Gaylord, Michigan, said Father Ben Rexroat, vocation director. Two ordinations were slated for June 20, one to the priesthood and one to the transitional diaconate.

“Obviously things are subject to change,” he said, adding that he really hopes to keep the original ordination date, because Gaylord Bishop Steven J. Raica has been named to head the Diocese of Birmingham, Alabama, and is to be installed there June 23. Pope Francis appointed him to Birmingham March 25.

Elsewhere in the Gaylord Diocese, seminarians are living in pairs in various rectories to maintain some semblance of fraternity as they take online courses.