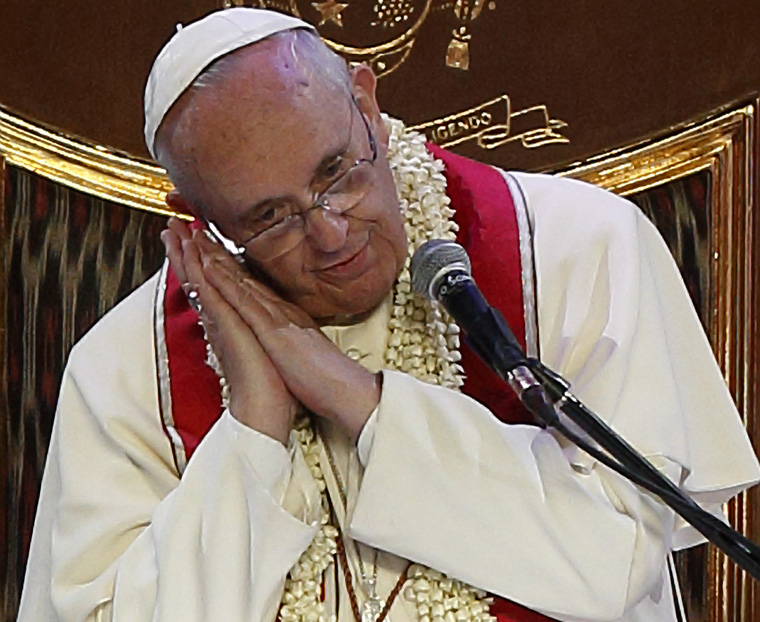 VATICAN CITY (CNS) — St. Joseph is the patron saint of retired Pope Benedict XVI — Joseph Ratzinger — but Pope Francis’ devotion to the husband of Mary and guardian of Jesus is clear as well.

In fact, at the beginning of his pontificate in 2013, Pope Francis confirmed a directive that Pope Benedict had made, but which had not gone into effect, to include the name of St. Joseph permanently in the eucharistic prayers used at most Masses in the Latin rite.

Pope Francis formally inaugurated his papacy on St. Joseph’s feast day, March 19, and he has a spikenard, the flower used as a symbol of St. Joseph, on his coat-of-arms.

And he has popularized statues of St. Joseph sleeping — or, better, dreaming — mentioning on many occasions how he places particularly difficult prayer requests under the statue.

Meeting families in the Philippines in January 2015, he told them, “I have great love for St. Joseph because he is a man of silence and strength. On my table I have an image of St. Joseph sleeping. Even when he is asleep, he is taking care of the church.”

The Italian website Vatican Insider reported that Pope Francis had told one of his aides about the statue early on. “You know,” he reportedly said, “you have to be patient with these carpenters: They tell you they’ll have a piece of furniture finished in a couple of weeks and it ends up taking a month even. But they get the job done and they do it well! You just need to be patient.”

Amid Italy’s nationwide lockdown to stem the spread of the coronavirus, Pope Francis spoke about the importance of St. Joseph during his weekly general audience March 18. He said, “In life, in work, in family, in joy and in sorrow, he always looked for and loved the Lord, earning the praise Scripture offers of being a just and wise man. Always invoke him, especially in difficult times, and entrust your lives to this great saint.”

Pope Francis also invited Catholics, especially in the midst of the COVID-19 pandemic, to put their families “under the loving gaze of St. Joseph, guardian of the Holy Family and of our families.”

The next morning, preaching during his livestreamed Mass, the pope said God chose “a just man, a man of faith” to raise his son on earth.

As a carpenter, the pope said, St. Joseph must have been very precise. “He was able to adjust an angle of wood by millimeters; he knew how to do it. He was able to trim a millimeter off the surface of a piece of wood. Right? He was precise. But he also was able to enter into the mystery that he could not control,” the mystery of God’s plan for his life and, especially, the mystery of his son, who was both human and God.

When Pope Francis formally inaugurated his papacy in 2013, he told the crowd in St. Peter’s Square that “St. Joseph appears as a strong and courageous man, a working man, yet in his heart we see great tenderness, which is not the virtue of the weak, but rather a sign of strength of spirit and a capacity for concern, for compassion, for genuine openness to others, for love.”

St. Joseph responded to God’s call to be the guardian and protector of his son “by being constantly attentive to God, open to the signs of God’s presence and receptive to God’s plans, and not simply his own,” he said.