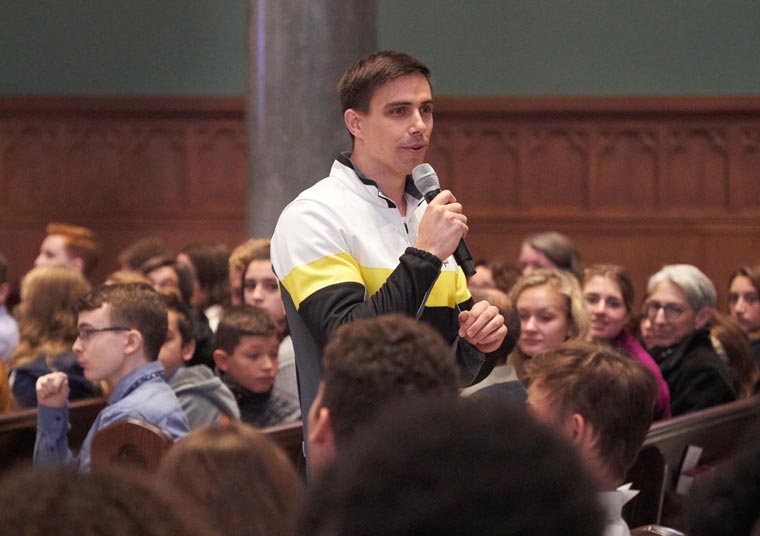 The scene sparks like a fun house for the strong and the zany.

On the sidelines, the fans — ordained people among them — go crazy. Announcers exclaim as if it’s a pro wrestling match. And the mom and dad  send a scream of parental solidarity into the uproarious spectacle.

Last year, Sean Bryan, the “Papal Ninja,” finished second in the national finals of TV’s American Ninja Warrior, which involves feats of strength, speed, and guts. On Oct. 18, he came to Syracuse with a message of love and with a Ninja’s eye toward the “amazing ledges and rafters” of the Cathedral of the Immaculate Conception.

“That would be fun to climb up,” he said appraisingly, “but at the same time this is a place set aside for prayer and for Our Lord; so I do integrate the faith in my daily life but I try not to do anything that people might perceive as irreverent.”

He thrilled the big crowd of high school students, though, with clips from the TV show and with two or three backflips right there in the cathedral. “David danced in ecstasy before the Lord [2 Samuel 6:14],” he noted.

Bryan’s audience had just attended the annual Mass for Life, a collaboration between the Office of Family/Respect Life Ministry and the Catholic Schools Office.

The audience wondered if Pope Francis knows who Bryan is. “I don’t know if the pope knows about me,” he said. “Maybe. I wouldn’t be too surprised, but I wouldn’t expect it.”

Did he call the papal representative to clear his nickname? “No, didn’t do that,” he said. “It’s building the Church, so why not?”

“No royalties or anything like that” from the Vatican for wearing the papal insignia on his shirt or his warmup jacket, he said. “Just a proud Catholic.”

He told the high schoolers:

•  “Be courageous to love without limits.”

•  “Come, Holy Spirit, be my strength. Banish from my head all fear, doubt, shame — these prevent us from loving.”

•  “We are all called to be disciples of Our Lord.”

•  “Study Scriptures, understand how Our Lord encountered people, and encounter people in the same way.”

•  “‘Believe’ means to trust the witness of another.”

•  Avoid selfishness and greed; they get in the way of one’s relationship with God.

•  Participate in the sacraments and talk about the Scriptures with friends, and imitate what the disciples did.

Bryan does 10 to 15 speaking engagements a year. He speaks softly and quickly and without any apparent accent. He grew up in New Jersey and now lives in Concord, Calif., not far from Oakland.

He was a gymnast during his two years at Temple University before transferring to the University of California at Berkeley, where he continued gymnastics and earned his undergraduate degree in physics. He later received a master of arts degree in theology from the Dominican School of Philosophy and Theology in Berkeley.

Everyone who competes on American Ninja Warrior, he said, has an outside occupation. Bryan helps direct a ministry called the Lay Mission Project, which helps people live the faith in their daily life. “It’s this hybrid online and in-person formation program,” he said, “that is taken on by a diocese, and we build communities of disciples to really integrate the faith into their work, and into their home, and everywhere that they find themselves.”

“I’m blessed with working at a Dominican priory,” he said, “so I have easy access to … evening prayer, morning prayer, the Mass.”

“Being a good Ninja’s way easier,” he said. “Being a good Catholic really does require a similar discipline of building habits: habits of prayer, habits of acting lovingly, and habits of virtue.”

If he didn’t have that vocation, would he be a designer of jungle gyms?

“I would still be doing the ministry that I do with the Lay Mission Project,” he said. “If I wasn’t doing that, I love doing video editing. I love designing and building obstacles. The first job I ever had was designing, building skateboard ramps, so I like using my hands for things.”

He will be trying out for the new season of American Ninja Warrior. Last season, he fell in the same place as the person who won $100,000, but that competitor finished the course a little bit faster. For coming in second, Bryan won nothing.

“They pay travel expenses, hotel expenses, and a small stipend when you’re there to cover food,” he said. “But they don’t give you … prize money unless you win the million dollars or the hundred thousand dollars.”

After Bryan’s presentation ended, Daniel Hatch, a senior at Holy Cross Academy in Oneida, challenged the noted Ninja to an arm-wrestling match as the other students crowded around. The Ninja, a wiry gymnast, is close to six feet tall. The student, a husky soccer player, martial artist, and weightlifter, is six feet tall, 210 pounds. They were virtually even at the start of the tense contest. There was no $1M prize, but the student glowed after topping the Ninja.

Did Hatch think the Ninja let up?

“It could have been,” he said, “I don’t know. He was pretty good. His arms are pretty big. It was nerve-racking, but God pushed me through it and I think I did pretty well.”

What is he going to call himself now?

“Jesus freak,” of course, he said. He expects to attend Mohawk Valley Community College next, and then he hopes to attend a Christian-based college for his bachelor’s degree.

Hatch found Bryan relatable in his presentation to the students. “I enjoyed that he would pray from his heart and talk from his heart,” he said.

Hatch’s girlfriend, Caroline Denney,  also a senior at Holy Cross Academy, said her boyfriend was going to challenge the Papal Ninja. “But then I dared him to and he did it.”

“I kind of knew he was going to win just ’cause he’s amazing,” she said.

What spoke to her in Bryan’s presentation, she said, was that “we should all be putting our faith at the top of our lives and that’s how we can get through life.”

She added: “We always look forward to the Mass for Life.”

The Papal Ninja said he did not take a dive against the powerful student.

Being a great Ninja, he explained, is “really all about strength-to-weight ratio. So I guess as a gymnast you want to be as light as you can be for how strong you are, so you have to balance how much muscle mass you want. … I don’t want to become too bulky or else I’m not going to be able to do as well.”

He doesn’t turn down too many challenges, does he?

Come showtime, he looks pretty good in the papal yellow and white.