Parker retires after 16 years as head of fundraising 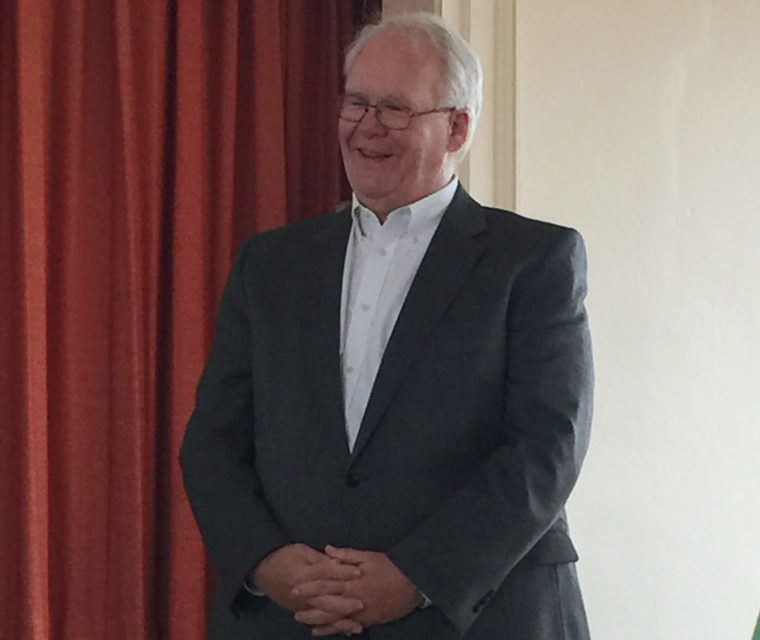 In his 16 years with the diocese, Christopher “Kit” Parker saw much change — in the world, in the Church, and in himself, too.

“I’m better at living my faith,” he reflected June 2, his last day as diocesan director of the Office of Stewardship and Development.

Parker grew up in Savannah, Ga., one of seven children in a faithful Catholic family. He attended Blessed Sacrament School and then St. John Vianney Minor Seminary, thanks to some encouragement from one of his teachers, Sister Mary Edward, he recalled. His vocation proved to be service of a different kind, however.

Parker has spent his professional life with nonprofit organizations including Literacy Volunteers of America and the American Red Cross. All told, he served some 25 years with the Red Cross before coming to the diocese, he said, serving in a variety of positions in Savannah; Birmingham, Ala.; Charleston, S.C.; Salt Lake City, Utah; Nashville, Tenn.; and Syracuse. Special assignments took him to Arkansas and Florida to work on refugee resettlement and to New York City in the wake of 9/11. The late Bishop James Moynihan allowed Parker to push back his first day with the diocese — originally scheduled to be September 15, 2001, he recalled — in order to work for six weeks on disaster fundraising, he said.

In his time with the diocese, Parker’s work has been wide-ranging. In a letter to staff announcing Parker’s retirement, Bishop Robert J. Cunningham offered highlights: “the establishment of the Foundation for the Diocese, implementation of parish increased offering programs, management and oversight of the annual HOPE Appeal, the initiation of the Cathedral Restoration project campaign, management of the Heritage Foundation, McDevitt Grants, and Pastors Advisory Committee and other outstanding service to our parishes and schools.”

The bishop also noted that during Parker’s tenure, the HOPE Appeal raised $64 million [now over $68 million], Foundation asset value increased by $6 million, increased offering programs brought in new funds of over $5.5 million for parishes, and more than $12 million had been returned to parishes, schools, and ministries through grants and overage.

Parker attributes the success of the 16 HOPE Appeal campaigns to “the support of the clergy,” he said. “They understood and could communicate the case and the need for support” to parishioners.

With the announcement of Parker’s retirement a year ago, the diocese transferred stewardship, development, and fundraising to the Foundation and began a search for an executive director to lead it. Tim Mahar was brought on board in November.

“I want to thank Kit for sharing his experience and providing his guidance for the last six months,” Mahar said. “In that time I’ve realized the impact he’s had on the entire diocese through his tireless commitment to the HOPE Appeal. Oftentimes an individual ‘behind the scenes’ like Kit doesn’t have the opportunity to realize the impact of his efforts as he has continued to raise the funds to support the priorities of the diocese.”

But Parker isn’t finished yet. “After facing the reality of retirement, I decided I wasn’t really ready,” he said. He will now serve as the Executive Director of the Foundation of the Roman Catholic Diocese of St. Augustine, Florida, and as the Director of Development and Stewardship, responsible for “increasing the assets of the Foundation and helping parishes to raise funds in support of initiatives established by the bishop to meet the needs of parishes, schools, and ministries in the diocese,” he said.

Some of the fond memories Parker will take with him center on the friendships he developed in the diocese — with the retired Bishop Moynihan; with colleagues like the late Msgr. Michael Minehan, who served as chancellor of the diocese; Father Cliff Auth, who also held that position; and Danielle Cummings, who now holds it; and with Debra Sochan, who served as Chief Financial Officer of the diocese and whom Parker wed in 2009.

Cummings recalled that when she first met Parker, “I was taken by his Savannah accent, which was a welcome surprise in upstate New York.”

“Kit Parker accomplished a great deal for the diocese leading successful HOPE Appeal campaigns year after year as well as steering the distribution of Heritage and McDevitt Funds,” she wrote in an email to the Sun. “But for me, I am most grateful for our camaraderie and his caring demeanor for those around him. Just a few months back, I was able to witness the best of Kit Parker and that was his devotion to Bishop Moynihan. He was by his side day by day until his death. Those moments at the Nottingham, the hospital and with Bishop’s friends and family were memories I will never lose.”

Cummings also noted Parker’s sense of humor and keen interest in Church history, as well as his talents in the kitchen. One evening, “Bishop Moynihan was entertaining potential donors in his residence and the cook was unable to be there that night. Kit stepped in and offered to do the whole meal. It turns out Kit is a fabulous cook,” she said.

He is also “a gentleman, a faith-filled man, and a true friend,” Cummings wrote.

“‘We are often formed by the people with whom we spend the most time. And when it comes to Church our laity are the clearest sign of the Holy Spirit in our midst.’ Although it’s been several years since Bishop Moynihan shared this teachable moment, I’m fairly sure that [Msgr.] George Sheehan, Kate Anderson and myself were its benefactors,” Father Auth reflected in an email. “We looked at one another and understood the truth of those words not only throughout the diocese but specifically in the lives of our people. If we had occasion that day to brainstorm who among us embodies these virtues, it most certainly would have included Kit Parker.”

“For the entirety of Kit Parker’s tenure he never forgot that charge to serve our parishes and the pastors who shepherd them,” he continued. Father Auth noted Parker’s honesty, faith, integrity, work ethic, professional proficiency, kindness, patience, and humor. “Thank you, Kit, for your wonderful witness to all things good,” he said.