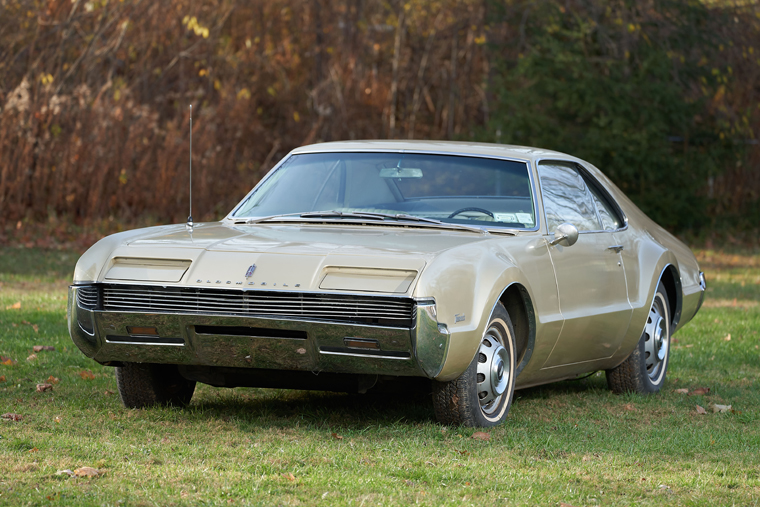 When Father Kevin Bunger purchased a 1966 GM Toronado last year, he figured restoring the classic car would be his retirement hobby down the road. But a bright idea shifted the restoration into high gear and now there’s a new course ahead: evangelization.

Father Bunger’s “interest in cars goes back almost as far as I can remember. Maybe being the son of an aeronautical engineer had something to do with it. By 4 or 5 years old I could distinguish various makes and models,” he told the Sun in a recent email.

But there was one car that made an impression — one that has stuck with him.

“I was 10 when the Toronado debuted and it was astonishing,” Father Bunger said. “‘The Car of the Year’ in Motor Trend magazine with many new features and appearing so futuristic — I never felt that way about a car before or since.”

By his teenage years, Father Bunger’s “interest in cars had waned — replaced by an interest in motorcycles. I restored a badly damaged one the summer after graduating from high school. Working the next few years as a small engine mechanic, that interest too faded as I became more and more interested in the Gospel and our faith,” he recalled.

Father Bunger went on to study for the priesthood; he has been a priest for 37 years, currently the pastor of the Church of the Annunciation in Clark Mills for 10, and pastor of St. John the Evangelist Church in New Hartford for six.

“Evangelization continues to evolve as an area of interest and dedication at both parishes,” Father Bunger said. “It is fair to say that this work and other similar initiatives would have been impoverished without the support from the diocesan Office of Evangelization,” he noted.

The plans for a retirement restoration project changed amid the coronavirus pandemic, social unrest, and political strife and Father Bunger felt called to bring Christ to even more people. He struck on the idea of selling the Toronado and using the profits to support parish and diocesan evangelization efforts.

Father Bunger knew he would need some help to get the job done quickly.

“This is where Orlando Riolo came in,” he explained. “He is the owner of Riolo’s Body Shop in Rome. Having become acquainted with him by way of one of the church’s contractors, Rick Hulser, it turns out that Orlando is a fellow Catholic from St. Peter’s in Rome.

“When told of the idea to sell the car and use the proceeds for church outreach, he became fully on board. He took charge of the restoration and made sure it was done at the least possible expense while still maintaining a quality outcome,” Father Bunger said. He also received help from TP Brake and Monopoli’s Garage, both in Utica.

The Toronado has a 425 cubic inch V-8 engine and 87,000 miles on the odometer. It’s been newly painted tan with a restored off-white interior. Father Bunger is hoping to sell it for about $25,000.

Proceeds will support the parishes’ evangelization efforts, including staff support, materials, and programming like the Genesis Mission, a program that aims to teach Catholics how to effectively evangelize.

Father Bunger says his creative approach to supporting the church’s mission and ministry is “just one example… Certainly, there are many others out there. But — how many more could there be if more Catholics started to focus in on these tasks of evangelization. For that we have to overcome hesitancy and fear.”

And the project goes beyond just a car and a fundraiser, he noted. It speaks to the collaboration between the parishes and the Office of Evangelization, as well as other diocesan ministries that help support the parishes’ mission, including among others the offices of Family/Respect Life, Youth and Young Adult Ministry, and Catechesis.

“And as, if not more, important — the prayer and hope for much more parishioner involvement in evangelization and parish ministries,” Father Bunger said. “The notion is letting go of something that makes up our current sense of who we are to allow space in our lives to be a more engaged disciple of Jesus Christ.”

Mary Hallman, director of the Office of Evangelization, sees a parallel between Father Bunger’s Toronado project and the work being done in and through his parishes.

“He saw the car and realized it needed some work to restore it to its former glory,” Hallman said. “The car had been sitting in a garage — which meant it wasn’t able to do what it had been created to do. Cars are meant to be driven! But it would take an investment of time and effort.

“The same thing is true of us. We are meant to be in relationship with God, and to share him with others. That’s what makes us truly human. But things get in the way of that — choices we make that separate us from God and prevent us from being who we are meant to be. We need to be restored, just like the Toronado! Pastors like Father Kevin realize that the parish is responsible for investing in people, time and effort spent accompanying people back to the loving arms of God, through grace and the sacraments. The work of evangelization means meeting people where they are, and helping them reclaim the life God offers, a life of truth, beauty, and goodness.”

The key is to put the pedal to the metal. “God has placed each of us here — at this time in history and we can all make a difference in the Holy Spirit.”