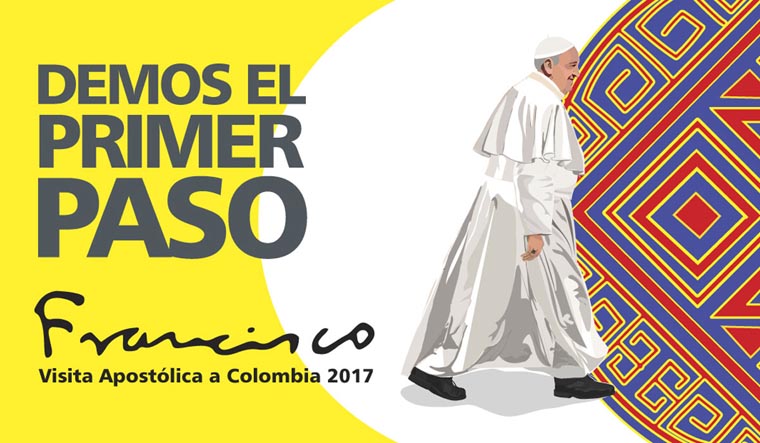 VATICAN CITY (CNS) — Pope Francis had promised to visit Colombia once a peace accord was in place, but his visit Sept. 6-10 is less about congratulations than about consolidation.

“He comes to take the first step with us,” said the bishops of Colombia in a document designed to prepare people for the pope’s visit.

In the Gospel of St. John, the apostle Peter is the first to enter the empty tomb after Jesus’ resurrection, the bishops wrote. In a similar way, St. Peter’s successor, the pope, will visit Colombia, which they described as “a terrible tomb” that “has been crushed with armed conflict, drug trafficking, insecurity and inequality.”

The people of Colombia are right to celebrate the 2016 peace accord that came after the suffering of 52 years of civil war. Pope Francis obviously will praise that accomplishment, but he also will urge them to “take the first step” toward reconciliation, the theme of the visit.

After a conflict in which at least 220,000 people died and more than 6 million people were uprooted from their homes, it won’t be easy. A small rebel group that was not part of the 2016 accord still exists, and the country faces a host of complicated processes for reintegrating former combatants into society and compensating victims of the conflict.

“Peace is a work of justice,” Pope Francis said during a Mass in Sarajevo, Bosnia-Herzegovina, in 2015. It is “not a justice proclaimed, imagined, planned, but rather a justice put into practice, lived out.”

The first step has to be to let go of festering anger and resentment, the pope has said. But he knows that is not easy.

Celebrating Mass in South Korea in 2014, Pope Francis told Catholics: “Jesus asks us to believe that forgiveness is the door which leads to reconciliation. In telling us to forgive our brothers unreservedly, he is asking us to do something utterly radical, but he also gives us the grace to do it.”

“What appears, from a human perspective, to be impossible, impractical and even at times repugnant, he makes possible and fruitful through the infinite power of his cross,” the pope told the South Koreans at the “Mass for Peace and Reconciliation.”

In striving for peace or trying to shore up the foundations of peace, every person has a part to play, the pope has insisted each time he has visited a community recovering from the horror of war.

And, looking at the need for forgiveness, the pope emphasizes it is not only about a willingness to forgive one’s enemies. It’s about taking responsibility for any way that one contributed to the tensions, even remotely, and asking forgiveness.

At a Marian shrine in Sri Lanka in 2015, Pope Francis prayed with families that had suffered during the country’s 25-year civil war. He offered words of consolation and of hope for the future, urging prayers “for the grace to make reparation for our sins and for all the evil which this land has known.”

“It is not easy to do this,” the pope told them. “Yet only when we come to understand, in the light of the Cross, the evil we are capable of, and have even been a part of, can we experience true remorse and true repentance. Only then can we receive the grace to approach one another in true contrition, offering and seeking true forgiveness.”

Another step is one Pope Francis has urged all over the world, but especially in countries yearning for peace: making a serious commitment to listen to one another and respond to the needs of those whose dignity has been crushed by poverty, discrimination or exclusion from political and social life.

“In order to successfully oppose the barbarity of those who would make of every difference the occasion and pretext for further unspeakable violence,” he said in Sarajevo, “we need to recognize the fundamental values of human communities, values in the name of which we can and must cooperate, build and dialogue, pardon and grow; this will allow different voices to unite in creating a melody of sublime nobility and beauty, instead of the fanatical cries of hatred.”

Visiting the Central African Republic, surrounded by U.N. peacekeepers in what, unfortunately, turned out to be a lull in the fighting, the pope told people to thank God for “the for the acts of solidarity and generosity which he inspires in us, for the joy and love with which he fills our families and our communities, despite the suffering and violence we sometimes experience, and our fears for the future.”

“Let us thank him for his gift of courage, which inspires us to forge bonds of friendship, to dialogue with those who are different than ourselves, to forgive those who have wronged us, and to work to build a more just and fraternal society in which no one is abandoned,” he told them.

As the people of Colombia work to overcome five decades of conflict and build a stable peace, Pope Francis wants to be with them and offer his support as they rally the courage needed to take the next step.