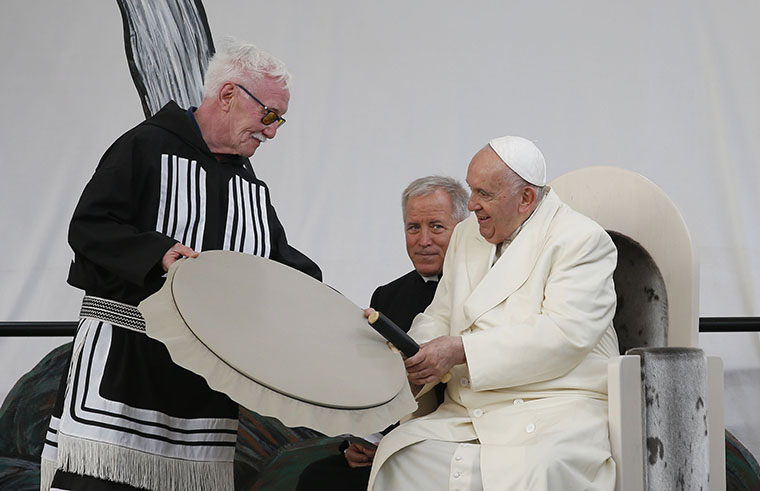 IQALUIT, Nunavut (CNS) — On a stage designed to evoke a qammaq — a traditional Inuit summer home built of whale ribs, sod and stone — Pope Francis again apologized to the Indigenous communities of Canada for Catholics’ complicity in breaking up their families and suppressing their languages.

“I want to tell you how very sorry I am and to ask for forgiveness for the evil perpetrated by not a few Catholics” who ran the residential schools Indigenous children were forced to attend, Pope Francis said in the Canadian Arctic.

The stories told by survivors “not only cause us pain; they also create scandal,” the pope said July 29 in Iqaluit, Nunavut’s capital city.

After a flight from Quebec of just over three hours, Pope Francis was met at the Iqaluit airport by provincial and city officials, leaders of local Inuit organizations and Andre Tautu and Salome Kangok, two survivors of residential schools.

Then, going into the town, which has a population of 7,429, Pope Francis held a private meeting with more survivors at Nakasuk Elementary School. In the school gym, designed to evoke the warmth and comfort of an igloo, the pope witnessed the lighting of the qulliq — a seal-oil lamp.

Outside the school, the townspeople, Canadian church representatives and visitors gathered for a public event highlighting Inuit culture, particularly dancing and throat singing.

Addressing the gathering, Pope Francis said that listening to the survivors “renewed in me the indignation and shame that I have felt for months,” ever since survivors traveled to the Vatican in March and April to share their stories and request that Pope Francis visit Canada to apologize on their land.

At the Vatican in March, Pope Francis said, an elder had described traditional Indigenous families — households of grandparents, parents and children — as being like “springtime, when young birds chirp happily around their mother. But suddenly, he said, the singing stopped: Families were broken up, and the little ones were taken away far from home. Winter fell over everything.”

As he prepared to return to Rome on an overnight flight, Pope Francis told the crowd, “We are here with the desire to pursue together a journey of healing and reconciliation that, with the help of the Creator, can help us shed light on what happened and move beyond that dark past.”

The lighting of the qulliq, he said, “remains a beautiful symbol of life, of a luminous way of living that does not yield to the darkness of the night.”