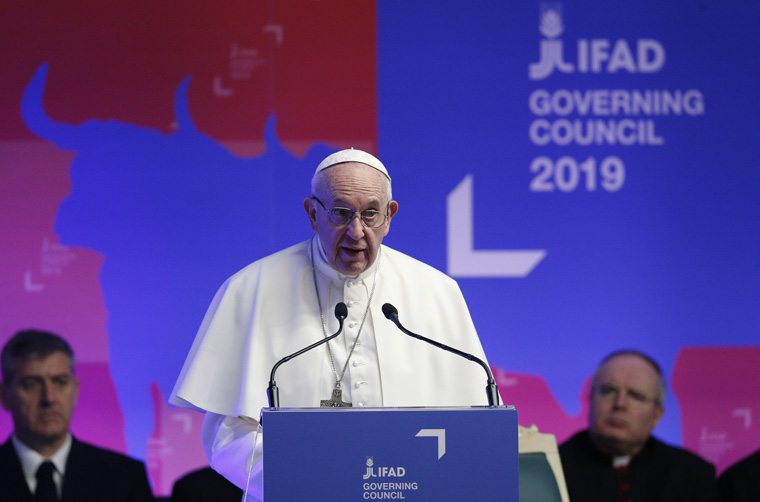 ROME (CNS) — Sustainable development in rural areas is key to making poverty and hunger a thing of the past, Pope Francis said.

In an address to members of the International Fund for Agricultural Development’s governing council Feb. 14, the pope said that while achieving such a goal “has been talked about for a long time,” there has not been enough concrete action.

“It is paradoxical that a good portion of the more than 820 million people who suffer hunger and malnutrition in the world live in rural areas, are dedicated to food production and are farmers,” he said at the council’s opening session at the Rome headquarters of the U.N. Food and Agriculture Organization.

The two-day meeting of the organization, commonly known as IFAD, was devoted to the theme: “Rural innovation and entrepreneurship.”

Before addressing the gathering, the pope presented a gift to the organization: a sculpture by Argentine artist Norma D’Ippolito, titled “Ecce Homo” (“Behold the Man”) depicting the hands of Christ bound with ropes.

In his speech, the pope said he came to bring the “longings and needs of many of our brothers and sisters who suffer in the world.”

“They live in precarious situations: the air is polluted, natural resources are depleted, rivers are polluted, soils are acidified,” he said. “They do not have enough water for themselves or for their crops; their sanitary infrastructures are very inadequate; their houses are meager and defective.”

While society has made advances in other areas of knowledge, he added, little progress has been made in helping the rural poor. Winning the fight against poverty and hunger requires using scientific and technological advances for the common good.

“Being determined in this fight is essential so that we can hear — not as a slogan but as a truth — ‘Hunger has no present and no future. Only the past,'” he said. “In order to do this, we need the help of the international community, civil society and all those who have the resources. Responsibilities cannot be evaded, passed from one to another, but must be assumed in order to offer concrete and real solutions.”

Pope Francis said that today’s challenges cannot be resolved “in isolation, occasionally or ephemerally” but instead require a joint effort that affirms “the centrality of the human person.”

Those who are suffering, he added, must be directly involved in the fight against hunger and not viewed as “mere recipients of aid that may end up generating dependencies.”

He also encouraged the members of IFAD to continue along the path of innovation and entrepreneurship to achieve the goal of eradicating malnutrition and promoting sustainable development.

“It is necessary to promote a ‘science with a conscience’ and truly put technology at the service of the poor,” the pope said. “On the other hand, new technologies should not be in opposition to local cultures and traditional knowledge, but rather complement them and act in synergy with them.”

After his speech, the pope met with delegates from 31 different indigenous groups present from Africa, Asia, the Americas and the Pacific.

Alessandro Gisotti, interim director of the Vatican press office, said in a statement that the pope’s meeting with the delegates lasted nearly 20 minutes.

Speaking to the delegates, the pope said that indigenous people are “a cry for hope” that remind the world of the shared responsibility in caring for the environment. While certain decisions have “ruined” the earth, he added, “it is never too late to learn the lesson and learn a new way of life.”

Indigenous people, he said, know how “to listen to the earth” and to live in harmony with it.

“Let us never forget the saying of our grandparents: ‘God always forgives, men sometimes forgive, nature never forgives,'” Pope Francis said. “And we are seeing this through its mistreatment and exploitation. You — who know how to dialogue with the earth — are entrusted with transmitting this ancestral wisdom to us.”