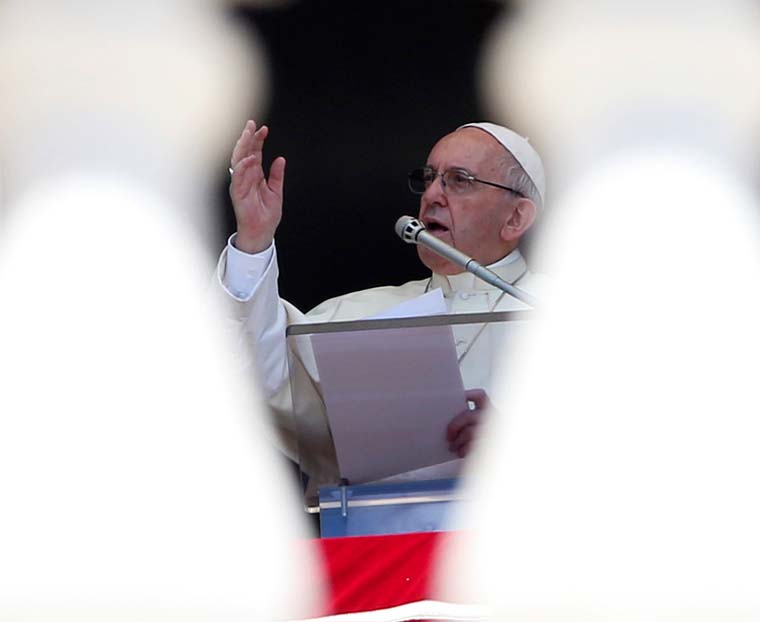 VATICAN CITY (CNS) — In a week in which natural disasters, war and racial conflicts dominated the headlines, Pope Francis prayed that Mary would bring peace to a divided world.

After reciting the Angelus prayer on the feast of the Assumption, the pope asked Mary to obtain “for everyone consolation and a future of serenity and harmony.”

“To Mary, Queen of Peace — who we contemplate today in the glory of paradise — I entrust once again the anxieties and sorrows of the people who suffer in many parts of the world due to natural disasters, social tensions or conflicts,” the pope told thousands of pilgrims gathered in St. Peter’s Square Aug. 15.

Pope Francis did not name any specific location, but as he spoke, the search for survivors continued in Sierra Leone after a devastating mudslide engulfed the outskirts of the capital, Freetown, killing more than 300 people. Flooding and landslides also struck southern Nepal, killing at least 70 people.

In Charlottesville, Virginia, clashes between white nationalists and protesters resulted in the death of three people, including a 32-year-old paralegal, Heather D. Heyer, who was killed Aug. 12 when a car plowed into a group protesting the white nationalist rally.

In his main Angelus talk, the pope reflected on the day’s Gospel reading, which recalled Mary’s visit to her cousin Elizabeth.

The joy felt by Elizabeth and the child in her womb reflects the interior joy Christians feel in Christ’s presence, the pope said. “When Mary arrives, joy overflows and bursts from their hearts because the invisible yet real presence of Jesus fills everything with meaning: life, family, the salvation of the people. Everything!”

In response, Mary proclaims the Magnificat, her hymn of praise to God for his great works. Pope Francis said it is the hymn of “humble people, unknown to the world, like Mary, like her husband Joseph as well as the town where they live, Nazareth.”

God accomplishes “great things with humble people,” the pope said, inviting people in St. Peter’s Square to reflect on the state of their own humility.

“Humility is like an empty space that leaves room for God. A humble person is powerful because he is humble, not because he is strong. This is the greatness of humility,” he said.

The joy Mary brings because she brings Jesus to the world gives all Christians “a new ability to pass through the most painful and difficult moments with faith” as well as the “ability to be merciful, to forgive, understand and support each other.”

“Mary is a model of virtue and faith,” Pope Francis said. “We ask her to protect and sustain us that we may have a faith that is strong, joyful and merciful. May she help us to become saints, to meet her one day in paradise.”