Pope leads prayers for an end to ‘inhuman violence’ of terrorism 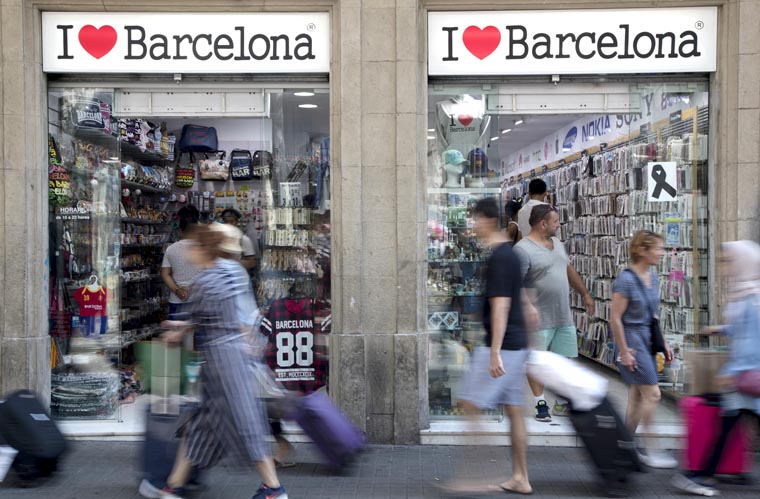 VATICAN CITY (CNS) — “Let us beg the Lord, God of mercy and peace, to free the world from this inhuman violence,” Pope Francis prayed after a week of deadly terrorist attacks in Africa and Europe.

Reciting the Angelus prayer at midday, the pope asked an estimated 10,000 people in St. Peter’s Square to pray in silence and then to join him in reciting the Hail Mary for the victims of the attacks the previous week in Burkina Faso, Spain and Finland.

At a restaurant in Ouagadougou Aug. 13, gunmen opened fire on people eating outside. Authorities in Burkina Faso said 18 people died and 20 were injured. The gunmen were believed to be part of a group known as “al-Qaida in the Islamic Maghreb.”

In Spain, 13 people died after a van mowed down pedestrians Aug. 17 on Barcelona’s famous Las Ramblas street and another woman died in a vehicle attack the next day in Cambrils. Five suspects were killed by police and other members of what authorities described as a 12-man terrorist cell were being sought.

In Turku, Finland, Aug. 18, two women were stabbed to death and eight other people were injured in what police described as a terrorist attack.

Among the pilgrims in St. Peter’s Square for the midday prayer were the 50 first-year students of the Pontifical North American College, the seminary in Rome sponsored by the U.S. bishops. Pope Francis gave them a shoutout before wishing everyone in the square a happy Sunday.

In his main Angelus talk, the pope spoke about the day’s Gospel reading from St. Matthew about the Canaanite woman who persistently asks Jesus to heal her daughter.

“This woman’s interior strength, which allows her to overcome every obstacle, can be found in her maternal love and in her trust that Jesus can fulfill her request,” the pope said. “This makes me think of the strength of women. With their strength they are able to obtain great things. We’ve know many women like this.”

In the Gospel story, when the woman first cries out, Jesus seems to ignore her, the pope noted. But she is not discouraged and continues to call out to him.

In the end, Jesus recognizes her great faith and answers her request, the pope said. “Her insistence in invoking Christ’s intervention stimulates us never to be discouraged and not to despair when we are oppressed by the harsh trials of life.”

“The Lord does not turn away from our needs and, if sometimes he seems indifferent to our requests for help, it is to test us and strengthen our faith,” Pope Francis said. “We must continue to cry, like this woman: ‘Lord, help me. Lord, help me.’”