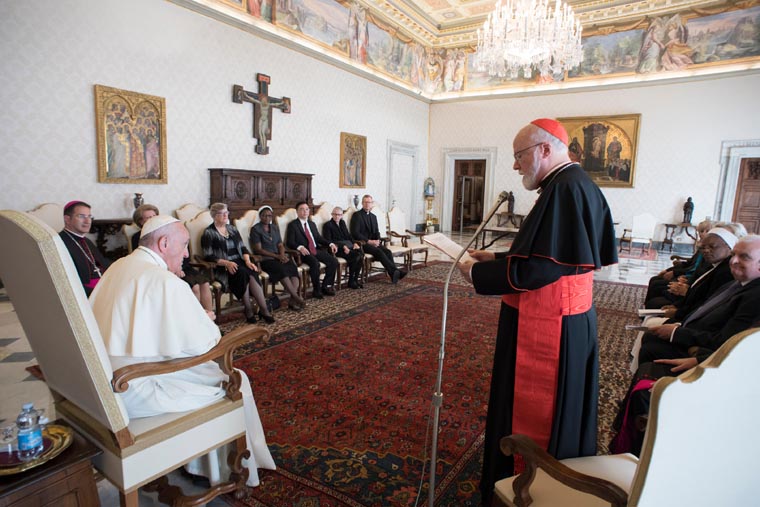 VATICAN CITY (CNS) — Pope Francis has named nine new members to the Pontifical Commission for the Protection of Minors, including abuse survivors or the parents of survivors, the Vatican said.

However, respecting “the right of each person to disclose their experiences of abuse publicly or not to do so,” the commission said Feb. 17, “the members appointed today have chosen not do so publicly, but solely within the commission.”

Pope Francis re-appointed Cardinal Sean P. O’Malley of Boston to be president of the commission, which the pope originally established in 2014. The terms of the original members had expired in December.

The first group of members had included two survivors who were very public about their experience of abuse as children. Peter Saunders, a British survivor and advocate, was asked by the commission to take a leave of absence in 2016; Marie Collins, an Irish survivor and advocate, announced in March 2017 that she had resigned. Both were outspoken about what they saw as resistance to implementing change and ensuring accountability for bishops guilty of covering up abuse.

The new members, whose appointments were announced by the Vatican Feb. 17 include: Benyam Dawit Mezmur, an Ethiopian who was chair of the U.N. Committee on the Rights of the Child in 2015-17; Indian Sister Arina Gonsalves, a certified counselor and consultant on abuse cases; Neville Owen, a judge and former chair of the Australian Catholic Church’s Truth, Justice and Healing Council; Sinalelea Fe’ao, chief education officer for the Diocese of Tonga and Niue; and Myriam Wijlens, a canon law professor from the Netherlands.

Also appointed were: Ernesto Caffo, an Italian professor of child and adolescent psychiatry and member of the board of directors of the International Center for Missing and Exploited Children; Sister Jane Bertelsen, a member of the Franciscan Missionaries of the Divine Motherhood, who has worked for 20 years in developing child-protection policies in Australia and England; Teresa Kettelkamp, former executive director of the U.S. Conference of Catholic Bishops’ Secretariat of Child and Youth Protection; and Nelson Giovanelli Dos Santos, the Brazilian co-founder of the Fazenda da Esperanca and an expert in the rehabilitation of youth.

The seven members who were re-appointed are: Jesuit Father Hans Zollner, director of the Center for Child Protection at Rome’s Pontifical Gregorian University; Gabriel Dy-Liacco, a psychotherapist from the Philippines; Auxiliary Bishop Luis Manuel Ali Herrera of Bogota, Colombia; Hannah Suchocka, professor of law and former prime minister of Poland; Sister of Charity Kayula Lesa of Zambia, who has worked with refugees and in the prevention of human trafficking; Precious Blood Sister Hermenegild Makoro, secretary-general of the Southern African Catholic Bishops Conference; and Msgr. Robert Oliver, commission secretary and former abuse investigator for the Congregation for the Doctrine of the Faith.

Cardinal O’Malley, in a statement released by the commission, said the new members “will add to the commission’s global perspective in the protection of minors and vulnerable adults.”

In April, the renewed commission will meet “with several people who have experienced abuse” before discussing ways to promote an ongoing dialogue with survivors, said the commission’s statement.

“Discussions have been underway for some months with a view to creating an ‘International Survivor Advisory Panel,’ a new structure shaped by the voices of victims-survivors,” the statement said.

Baroness Sheila Hollins, a mental health specialist and commission member who was not reappointed, will make a presentation about the advisory panel at the April meeting.

“The goals for this panel include studying abuse prevention from the survivor’s perspective and being pro-active in awareness raising of the need for healing and care for everyone hurt by abuse,” the statement said.