Pope: Synodality about listening to the Spirit, not a ‘majority consensus’ 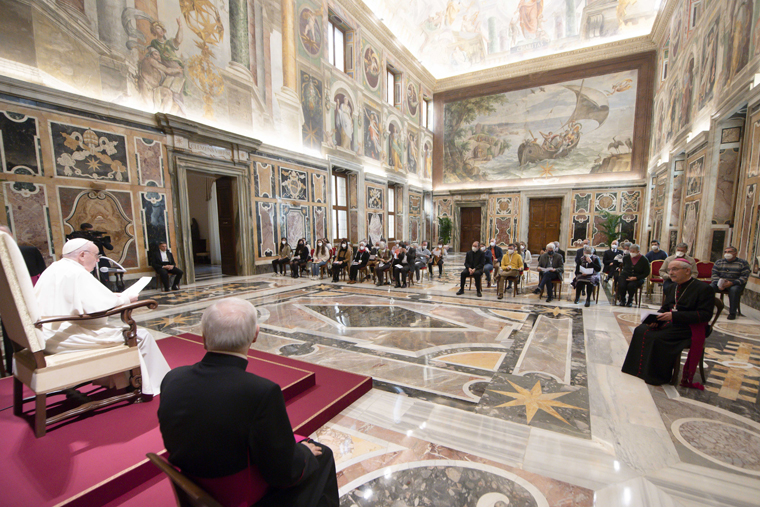 VATICAN CITY — The synodal process is a path of engagement that makes room for the Holy Spirit, and not a “majority consensus like a parliament” to guide the universal church, Pope Francis said.

Speaking with leaders of the French Catholic Action movement Jan. 13, the pope said that synodality is “not a plan or a program to be implemented” but “a style to be adopted” that listens to the spirit through the word of God, prayer and adoration.

The French bishops’ conference had said the purpose of the meeting was for the Catholic Action leaders to present a to the pope and other Vatican leaders a document titled “Being Apostles Today.”

The goal of the document, which is the culmination of two years of work by Catholic groups in France, is “to discern what unites them in their approach and their actions,” the bishops’ conference said in a press release.

The French bishops’ conference also noted that the document aligns with the goals of the upcoming Synod of Bishops on synodality.

During their meeting with the pope and various dicasteries, the Catholic Action leaders were to “highlight the relevance of their place as ‘apostles’ today in the French ecclesial landscape because of their immersion in a society that is increasingly distant from Christian references and the Church,” it said.

“This trip will also allow them to listen to what the authorities of the universal church will have to say to them to broaden their vision, their reflections and their actions in order to better associate themselves, as partners, in the necessary evolutions of the church,” the statement said.

Welcoming the Catholic group leaders to the Vatican, the pope reflected on the call to be “effective apostles,” citing the example of the two disciples who met Jesus on the road to Emmaus.

The disciples, he said, recalled their experience of being with Jesus, recognized his presence and then went to Jerusalem to announce his resurrection. Their experience, which Christians today should imitate, can be summarized in three words: see, judge and act.

Reflecting on seeing, Pope Francis emphasized the importance of memory and that the first step of Christian witness is to look back at one’s life “to understand the meaning of what has been lived and to perceive how God was present at every moment.”

Nevertheless, “the subtlety and delicacy of the Lord’s action in our lives sometimes prevents us from understanding it in the moment, and it takes this distance to grasp its coherence,” he said.

To judge or discern the presence of God in their lives, he continued, Christians must also subject their lives “to the scrutiny of the word of God.”

“In the encounter between the events of the world and of our lives, on the one hand, and the word of God, on the other, we can discern the appeals that the Lord makes to us,” the pope said.

He also called on Christians “to give equal space to prayer, to interiority and to adoration,” because that is how they place their lives under Jesus’ gaze and accept “this encounter between my poor humanity and his transforming divinity.”

Lastly, to act means to support and foster God’s action while “adapting to the reality which is constantly evolving.”

“Today, especially in Europe, those who frequent Christian movements are more skeptical of institutions, they seek less demanding and more ephemeral relationships,” he said. “They are more sensitive to emotions, and therefore more vulnerable, more fragile than previous generations, less rooted in the faith, but nevertheless in search of meaning and truth, and no less generous.”

Pope Francis encouraged the Catholic Action groups to continue their mission of helping others “find or rediscover the joy of knowing the friendship of Christ and proclaiming the Gospel.

“Your mission, as Catholic Action, is to reach them as they are, to make them grow in the love of Christ and their neighbor, and to lead them to a greater concrete commitment, so that they may be protagonists of their own lives and of the life of the Church, so that the world may change,” the pope said.