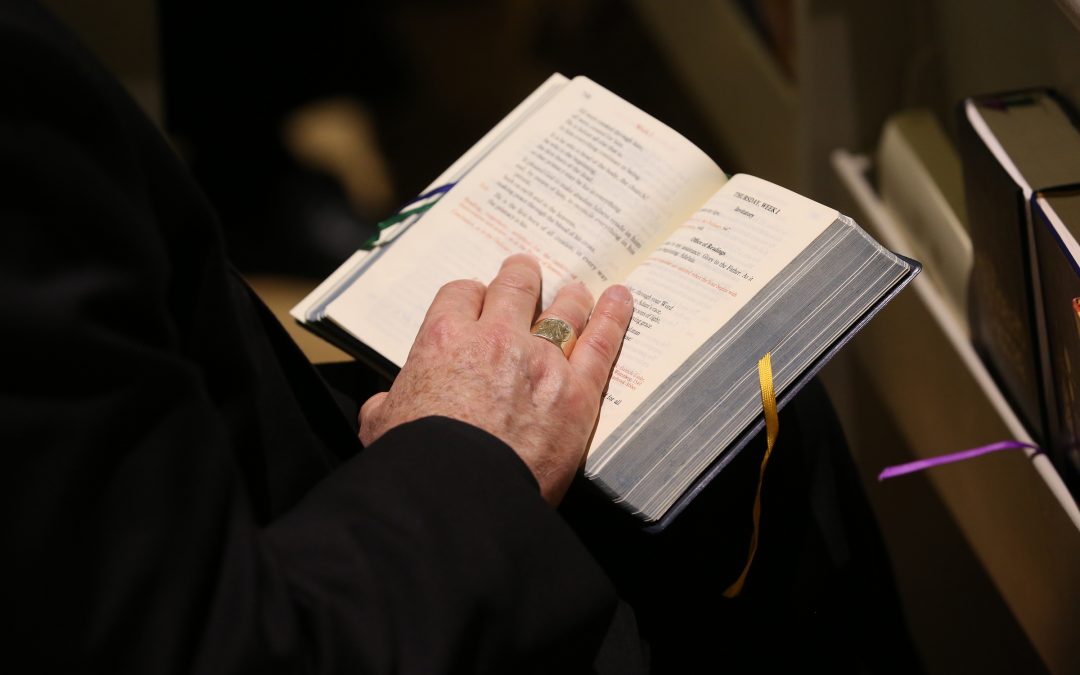 A bishop holds a prayer book during a service in the Chapel of the Immaculate Conception at Mundelein Seminary Jan. 2 at the University of St. Mary of the Lake in Illinois, near Chicago. The U.S. bishops began their Jan. 2-8 retreat at the seminary, suggested by Pope Francis in September, which comes as the bishops work to rebuild trust among the faithful as questions continue to revolve around their handling of clergy sex abuse. (CNS photo | Bob Roller)

VATICAN CITY (CNS) — The clerical abuse crisis and the “crisis of credibility” it created for the U.S. bishops have led to serious divisions within the U.S. church and to a temptation to look for administrative solutions to problems that go much deeper, Pope Francis told the U.S. bishops.

Without a clear and decisive focus on spiritual conversion and Gospel-inspired ways of responding to victims and exercising ministry, “everything we do risks being tainted by self-referentiality, self-preservation and defensiveness, and thus doomed from the start,” the pope wrote.

In a letter distributed to the bishops at the beginning of their Jan. 2-8 retreat, Pope Francis said he was convinced their response to the “sins and crimes” of abuse and “the efforts made to deny or conceal them” must be found through “heartfelt, prayerful and collective listening to the word of God and to the pain of our people.”

“As we know,” he said, “the mentality that would cover things up, far from helping to resolve conflicts, enabled them to fester and cause even greater harm to the network of relationships that today we are called to heal and restore.”

The “abuses of power and conscience and sexual abuse, and the poor way that they were handled” continue to harm the church and its mission, he said, but so does “the pain of seeing an episcopate lacking in unity and concentrated more on pointing fingers than on seeking paths of reconciliation.”

Such a division, which goes well beyond a “healthy” diversity of opinions, is what caused him to recommend a retreat because, the pope said, “this situation forces us to look to what is essential and to rid ourselves of all that stands in the way of a clear witness to the Gospel of Jesus Christ.”

The pope said he had hoped “to be physically present” with the bishops for the retreat, but since that was not possible, he was pleased they accepted his suggestion to have the gathering be led by Capuchin Father Raniero Cantalamessa, preacher of the papal household.

Pope Francis originally had suggested the bishops make a retreat in November instead of holding their annual general meeting. But the scope of the abuse crisis and the intense pressure the bishops’ felt to act led them to keep the November meeting and plan the retreat for January.

Plans for the November meeting and for the retreat came after a summer of shocking news: revelations of credible abuse accusations against Archbishop Theodore E. McCarrick, retired archbishop of Washington; the release of a Pennsylvania grand jury report accusing more than 300 priests in six dioceses of abusing more than 1,000 children in a period spanning 70 years; and accusations published by Archbishop Carlo Maria Vigano, former apostolic nuncio to the United States, that Pope Francis had known about and ignored allegations that Archbishop McCarrick had sexually harassed seminarians.

In his letter to the bishops, Pope Francis said he suggested the retreat “as a necessary step toward responding in the spirit of the Gospel to the crisis of credibility that you are experiencing as a church.”

“We know that, given the seriousness of the situation, no response or approach seems adequate,” the pope wrote. Still, pastors must have the wisdom to offer a response based on listening to God in prayer and to the suffering of the victims.

Pope Francis said church leaders must “abandon a modus operandi of disparaging, discrediting, playing the victim or the scold in our relationships,” and instead listen to the “gentle breeze” of the Gospel message.

Encouraging the bishops to continue taking steps “to combat the ‘culture of abuse’ and to deal with the crisis of credibility,” he warned that credibility “cannot be regained by issuing stern decrees or by simply creating new committees or improving flow charts, as if we were in charge of a department of human resources. That kind of vision ends up reducing the mission of the bishop and that of the church to a mere administrative or organizational function in the ‘evangelization business.'”

A restored credibility, he said, can only be “the fruit of a united body that, while acknowledging its sinfulness and limitations, is at the same time capable of preaching the need for conversion. For we do not want to preach ourselves but rather Christ who died for us.”

“We want to testify that at the darkest moments of our history the Lord makes himself present, opens new paths and anoints our faltering faith, our wavering hope and our tepid charity,” the pope said.

The bishops as a group, he said, must have a “collegial awareness of our being sinners in need of constant conversion, albeit deeply distressed and pained by all that that has happened.”

Humility “will liberate us from the quest of false, facile and futile forms of triumphalism” and from anything that would “keep us from approaching and appreciating the extent and implications of what has happened.”

“Affective communion with the feelings of our people, with their disheartenment, urges us to exercise a collegial spiritual fatherhood that does not offer banal responses or act defensively, but instead seeks to learn — like the prophet Elijah amid his own troubles — to listen to the voice of the Lord.”

The bishops had planned to devote most of their November meeting to discussing and voting on several proposals to the abuse crisis, including the formulation of standards of episcopal conduct and the formation of a special commission for reviewing complaints against bishops for violations of the standards.

However, Cardinal Marc Ouellet, prefect of the Congregation for Bishops, asked the bishops to delay their votes, citing the short amount of time the Vatican had to review the proposals, possible conflicts in them with church law and in view of the meeting Pope Francis has called for February with the presidents of all the world’s bishops’ conferences to discuss child protection and the abuse crisis.