Pope urges bishops to teach discernment, including on political issues 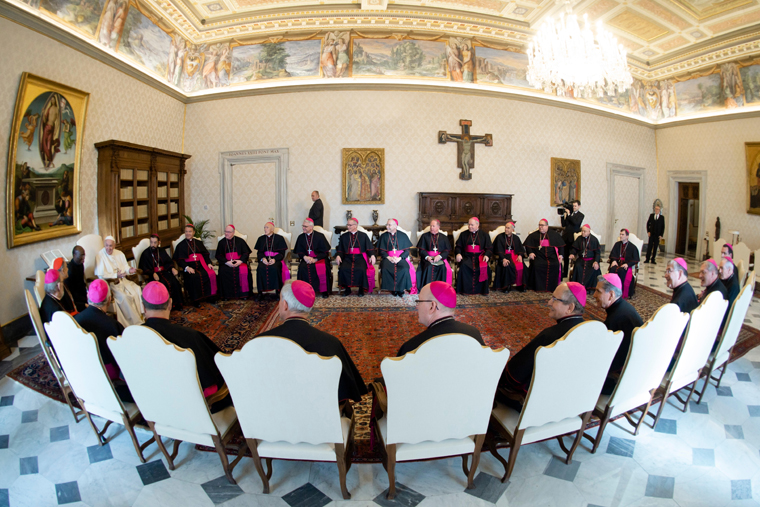 VATICAN CITY (CNS) — Sometimes the political choices people face can seem like a choice between supporting a “snake” or supporting a “dragon,” but Pope Francis told a group of U.S. bishops their job is to step back from partisan politics and help their faithful discern based on values, said Cardinal Daniel N. DiNardo of Galveston-Houston.

Meeting the bishops of Texas, Oklahoma and Arkansas Jan. 20, Pope Francis mentioned how, in an election, “you sometimes seem to be caught, you know, are you going to vote in one sense for a snake or you going to vote for a dragon?” Cardinal DiNardo said.

The pope’s advice to the bishops was “teach your people discernment by you stepping back from the sheer politics of it” and focus on the values at stake, Cardinal DiNardo told Catholic News Service. “If you try to step back and say, ‘but here are the major moral issues that we face,’ that’s what is most important.”

The region’s 26 bishops, including auxiliaries and retired bishops, spent about two-and-a-half hours talking with Pope Francis in English and Spanish. The pope responded in Italian so his aide could translate the responses into English.

The topics were wide-ranging and included the clerical sexual abuse crisis, migration, the challenges of a media-permeated culture and forming Christian consciences, especially in a time of deep political divisions.

Bishop Daniel E. Flores of Brownsville, Texas, one of four Texas dioceses on the border with Mexico, said all of those issues were important, but for him the key was listening to the pope and being listened to him by him.

Citing the “whole host of issues” they discussed with Pope Francis, Bishop Edward J. Burns of Dallas said, “I am really looking forward to sitting, digesting, reflecting and praying over the conversation we had this morning with the successor of St. Peter.”

“It was exciting. It was exhilarating,” he said.

Pope Francis is attentive to and knows the pastoral challenges posed by modern social media and their pervasive presence in many people’s lives, said Bishop Flores, a daily Twitter user. But the pope has “a calmness about how we address that,” mainly by remaining true to the identity as pastors, proclaiming the Gospel and encouraging people to act according to it.

Bishop Flores said all the bishops realize they must learn “how to be a pastor in a media world where you keep justice and charity and a steady focus on the Gospel.”

The “ad limina” visits are “very important for deepening our sense of personal communion” with the pope, the successor of Peter, he said. “It’s not just the office, it’s the affection for your father spiritually that we need to cultivate, because it is part of the gift that is the communion of the church.”

“The narrative” that Pope Francis and many of the U.S. bishops “are on different pages,” he said, is “overblown.”

Sometimes that impression may arise when a bishop reacts to a news or social media report about something the pope has said. “It is our responsibility to hear him in his own words and to resist the temptation that sometimes hits across the spectrum of the church to jump to a conclusion because of some line that was quoted here or there.”

Even in the fast-paced world of social media, “we can afford to be judicious and thoughtful,” he said. “It’s part of our intellectual responsibility.”

Bishop Flores said he was surprised by how much Pope Francis knew about the life and witness of Blessed Stanley Rother, the Oklahoma native martyred in Guatemala in 1981. After his name appeared on a death list, Blessed Rother went back to Oklahoma, but refused to stay.

“It was very moving to hear the Holy Father, the successor of Peter, recount to us a story we all know so well,” the bishop said. It showed the pope’s awareness of “that missionary spirit and how it is alive in the United States.”

Pope Francis also encouraged the bishops to be pastors, in a real sense, spending time with their faithful “not just at confirmations and on the big feast days,” he said. The pope said, “The people have a nose for the deep reality of the church, and that is that where the bishop is, there is the church.”

The pope’s words were “profoundly pastoral, profoundly theological and ecclesial — a sense of church” — as well as obviously flowing from a deep spirituality, Bishop Flores said.

On migration, Bishop Flores said the pope was clearly knowledgeable about and grateful for the decades of work the Catholic Church in the United States has done to welcome migrants and refugees and was encouraging of what the bishops are doing now, especially to speak of “the dignity of the immigrant and the just treatment” of them.

Cardinal DiNardo said the conversation also touched on the fact that “some people think when you deal with those issues that’s not church teaching, you know, that’s politics.”

Pope Francis, he said, encouraged the bishops to spend time reflecting on and sharing with their people the difference between “politics as ideology and Catholic social teaching, which stresses the human person and how we are always called to be at their behest.”

“We need to be voices for the immigrants” who do not have a voice, “pushed as they are by many different sides,” the cardinal said. The question of migration policy is complicated, but Christians must come down on the side of “the poor and those who are in need. The immigrants, at one point he mentioned, they really represent to us the face of Christ suffering. The suffering Jesus.”

Bishop Burns was among the Texas bishops who voiced their opposition to Gov. Greg Abbott’s announcement that the state would no longer resettle refugees.

The church as a mother takes care of people in need, he said. “And while every country has a right to protect its border, every person has a right to a better life.”

What really is needed, he said, is immigration reform. “It’s taking all too long.”