‘Prayer requests from all over’ unite virtual rosary group 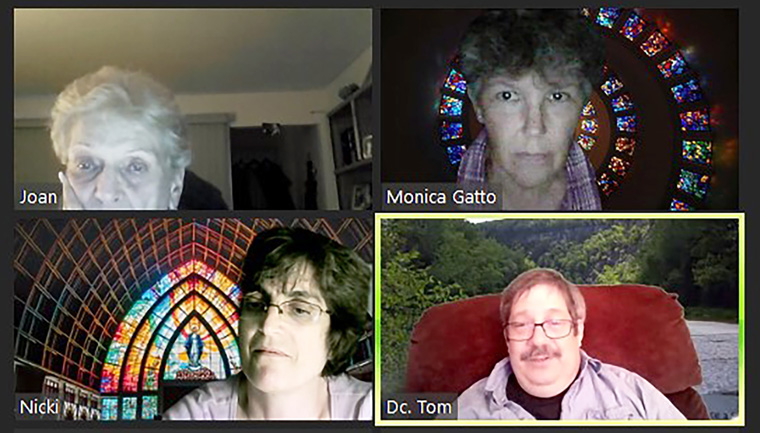 ‘I felt the need to be a part of something,’ one participant says

Each Wednesday evening a group of perhaps a dozen or more people gather to say the rosary. It’s been going on since March 2020, when the pandemic shut down churches. Deacon Tim McNerney had the idea with parishioners from St. John the Evangelist, Bainbridge, and St. Agnes, Afton, both in Chenango County.

What makes it unusual is the continued use of a virtual setting. That doesn’t show any sign of changing soon. In fact, that is what has drawn some of the regular participants to the screen each week. And word has spread. Participants regularly join the prayer from places like Long Island and Broome and Otsego counties. They’re from several dioceses. While most are women, there are some men too.

Before the rosary starts, each person who joins is asked in turn to list a prayer petition for the day.

“I really think it’s great to go around and pick a person mentioned who you are praying for. I think that’s so valuable to have a focus like that,” said Diana Torta of St. John’s.

Torta was invited to join by Nicki Andrews of St. Agnes.

“I had been really sick last year and she was a really good friend and she thought that I would enjoy it which I have,” Torta said.

“My middle name is Mary, so  I have a special affection for it,” she said of the rosary. “This just fits in with everything.”

‘The sense of community’

Andrews, a parish trustee at St. Agnes, is one of the biggest promoters of the weekly rosary, keeping tabs on the regular and semi-regular attendees. She also uses technical skills to bring the text onto the screen for people to follow. And she appears each week with a virtually-generated background that varies from stained-glass windows to nature scenes.

“The sense of community that we have together is just phenomenal,” Andrews said.

“I think it is very, very important for us to remember that where two or three are gathered together in my name there I am in the midst of them,” she said. “That is why we need to continue and to invite people.”

“It was just something that I needed to do,” said Joan DiChiara of St. John’s. Known as “Joanie” by the group, she said the weekly online rosary has spurred her to say the prayers each night now.

“My mother would be very proud of me because she was very religious,” DiChiara said. “She left me her faith and this has really helped me because it’s made me even do more.”

Each participant is asked to share what they’d like to pray for before the rosary starts. For DiChiara, it’s become important to remember people to pray for throughout the week.

“I have a list,” she said. “Somebody that needs prayers—I write down and I put it on my list.”

DiChiara invited her niece to join the group. Doreen MacMorris comes to the online session by telephone, so she can’t see all the people present while saying the rosary.

“During COVID last year, I felt the need to be a part of something,” MacMorris said. “This was really nice to connect with some new people in my life.”

MacMorris is a member of the Church of the Assumption of the Blessed Virgin Mary in Centereach, Long Island, in the Diocese of Rockville Centre.

“It’s a good feeling in my heart. I look forward to it every Wednesday and to hear everybody’s voices,” she said. “I recognize everybody now, even though I don›t see you.”

The participants take turns leading portions of the rosary. Jean Davis of St. John’s many times leads off with the first decade.

“Even now I do say the rosary every day. I have for a long time but there›s something very special about saying it with this group,” Davis said.

“I really look forward to doing it every Wednesday night and if I have a chance to do something else, I won›t do it because I don›t want to miss doing this with everybody,” she said.

“I really believe God is in the midst of us and he›s really smiling because we›re just so devout and so regular about praying for everything that everybody needs,” Davis added.

The St. John’s/St. Agnes–sponsored online rosary has been going for more than a year and a half with only a couple of nights off.

“What led me to it … was an announcement in the church bulletin,” said Val Maruszewski of Sacred Heart Church in Sidney, in the nearby Diocese of Albany.

“I thought it was a good idea, especially because we couldn’t get to our churches on lockdown. So I’ve been doing this ever since the beginning I guess.”

Another member of the group, not interviewed for this article, seems to be first online each week. She has been a faithful attendee from Long Island. Many months ago, she came down with COVID-19. She took part in the rosary through that, linking up from a hospital bed.

Greg Hrostowski is a deacon candidate from St. Vincent de Paul Blessed Sacrament in Vestal. He has belonged to many in-person rosary groups over the years, all of which no longer meet. He is glad to be part of the online rosary.

Hrostowski cited the “opportunity to be with a group and meet new people and hear prayer requests from all over,” and he said it is “wonderful to be able to pray and then as it comes to mind during the week to pray again for those petitions.”

“It’s a great group. I’m glad I started and continue to participate,” he added.

The St. John’s/St. Agnes online rosary will continue for the foreseeable future. For Doreen MacMorris, who attends almost each week from several hundred miles away, that’s a blessing.

“It’s a good feeling and renews you for the week and it’s renewed my faith also which is a very wonderful thing,” she said.