By Katherine Long | Editor
The “pro-life generation” was called to defend life Oct. 18 during the annual Mass for Life, co-sponsored by the diocesan Office of Family/Respect Life Ministry and the Catholic Schools Office.

Lisa Hall, director of Family/Respect Life Ministry, welcomed the students and underlined why they had gathered.

“Every October, the Catholic Church celebrates Respect Life Month to honor God for creating all human life,” she said. “We are reminded that every human life is made in God’s image and likeness and has infinite worth and value. Each of you, through your baptism, has been called to discipleship. You’ve been called to learn more about yourself and God, to celebrate the sacraments, and to serve one another in love. When we do these things we show God how much we value his gift of life.” 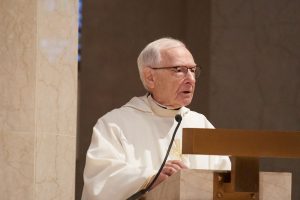 He began with a memory from February 1982, when “the emaciated bodies of 16,431 babies were found in a shipping container in Woodland Hills, California. The bodies were floating in formaldehyde. The container was found at the home of a man who ran a medical waste laboratory,” Msgr. Yennock said. He described the work of pro-life groups to give the babies a proper burial and read the lyrics of “Sixteen Thousand Faces,” a song written by Pat Boone about the lives lost. “16,000 heartbeats stopped in the doctor’s hand/16,000 angels stand before the throne/16,000 voices cry/how long, how long, how long,” one verse says.

With that ruling, “Suddenly, the womb, that should be the safest place in the world, became the most dangerous place in the world,” Msgr. Yennock said. Since the ruling, more than 60 million abortions have taken place, he noted, and “we are living with the consequences: dead babies; women scarred physically, emotionally, psychologically, and spiritually; fathers feeling emasculated, sad, and defenseless.”

“Where is God in all of this?” Msgr Yennock asked. “He is in a whole army of people who are determined to push back on all the horror and injustice. A good number of those warriors are young people like yourselves.”

He pointed to the thousands of young people who took to the Mall in Washington during January’s March for Life; to groups organized in support of life; and to Students for Life of America and 40 Days for Life, both national organizations dedicated to ending abortion. 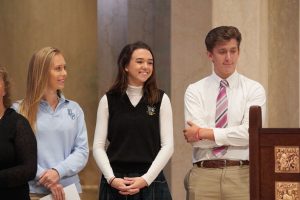 After Mass concluded, Hall and Dr. Barbara Messina, Director of Leadership Development & Mission Effectiveness for the Catholic Schools Office, announced the winners of this year’s Bishop James Moynihan Pro-Vita Awards. Created to honor the late bishop’s fearless pro-life leadership, the awards offer scholarships to graduating seniors for college expenses. Applicants are asked to answer “why are you pro-life and how will you help build a culture of life?” through video, essay, dance, song, music, pictures, or art. This year’s winners are Tom Westers of Bishop Ludden, Grace Tiderencel of Seton Catholic, and Julia Gnade of Bishop Grimes.

Watch the Mass in its entirety below, courtesy Syracuse Catholic Television.