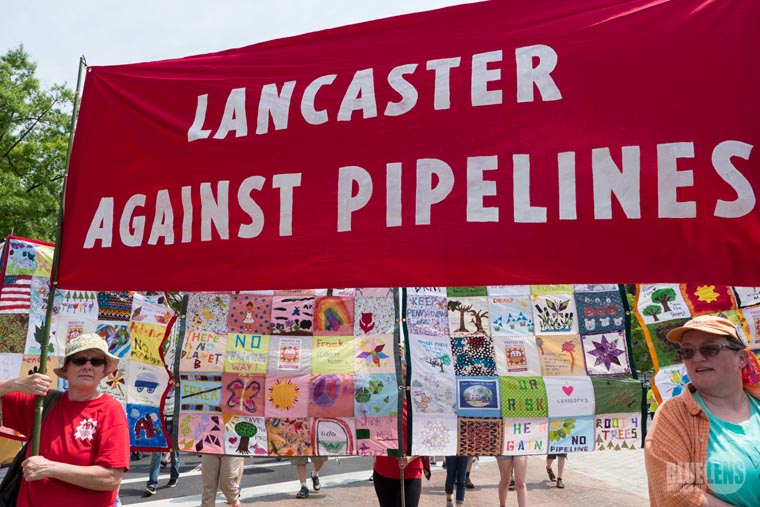 WASHINGTON (CNS) — Nearly two dozen people, including a juvenile, were arrested as they blocked workers from starting construction of a short leg of a natural gas pipeline on property owned by the Adorers of the Blood of Christ congregation in Columbia, Pennsylvania.

Singing traditional protest songs, the protesters from the group Lancaster Against Pipelines were charged Oct. 16 with defiant trespass and taken away one by one. They were released after a brief court hearing.

Those arrested were among more than 100 people who had peacefully gathered as construction workers arrived to begin working on a leg of the 183-mile Atlantic Sunrise pipeline being built by Tulsa, Oklahoma-based Williams Partners to carry gas from the Marcellus Shale in northeastern Pennsylvania.

“We will continue to have a presence here. How can we not? We live here. This is our home. These are outside marauders who have come in and seized our property,” said Ann Neumann, a member of the anti-pipeline group.

She said her nephew, Ashton Clatterbuck, 16, was among those arrested. He is the son of Mark Clatterbuck, one of the group’s leaders. The elder Clatterbuck was not arrested.

Work began as soon as the last protester was removed. The congregation’s land is in the Diocese of Harrisburg, Pennsylvania.

The Adorers have worked loosely with the anti-pipeline group in efforts to block construction.

Chris Stockton, a Williams spokesman, said the court had agreed with the company’s position that construction should begin as soon as possible.

“We respect people’s right to protest, but our focus is on constructing this project in a safe, efficient manner and we’ll work to make sure the workers, the protesters and the police get through this project safely,” Stockton told Catholic News Service.

Construction should last about a month, he said.

The day before construction began, the Adorers invited supporters through their Facebook page to gather for a vigil at a chapel Lancaster Against Pipeline built on the property in July. The simple chapel made of four posts and several cross boards, is located just outside of the pipeline right of way.

The sisters wrote that the pipeline “is a violation of the sanctity of creation, compelling us to challenge its installation through peaceful, prayerful resistance.”

“Ours is a peaceful, prayerful resistance to protect ‘the Holy in all of life,’” the Facebook post said.

The protesters and their supporters met just after sunrise at the chapel before moving to another site on the property, where those who were arrested stood around an excavator holding hands and singing protest songs. The event was broadcast live on Facebook.

The congregation has opposed the pipeline since it was proposed three years ago, maintaining that allowing it through their property would run contrary to their 2005 Land Ethic. The document holds that all land created by God is sacred and that the fossil fuel project would desecrate the landscape.

The congregation challenged a Federal Energy Regulatory Commission order authorizing construction and operation of the fossil fuel pipeline in federal court saying it violated the sisters’ right to practice their faith under the Religious Freedom Restoration Act and asked that it be rerouted. A federal judge ruled against the sisters Sept. 28, but they have appealed the decision. The judge allowed construction to begin even though the appeal was pending.

Brett Hambright, spokesman for the Office of the Lancaster County District Attorney, said those arrested face a maximum penalty of one year in jail if convicted.

“I want to stress that we take no joy in arresting individuals,” Hambright told NPR. “But it has been a cooperative group that has worked with our police. They were very peaceful and respectful, which is exactly what the police wanted to reciprocate with them as well.”