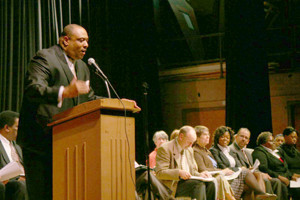 live out the Gospel. Sometimes, though, they barely have time to get up in the morning, get the kids ready for school, head to work, come home, start dinner, make sure homework is being done, clean up after dinner, get everyone settled for bed and then finally fall into bed themselves. Where is the time to make sure your elderly neighbors have all they need for their dinner or your children’s classmates aren’t going to bed hungry at night? How can we take care of others when we barely have time to take care of our own?

All across the country there are community groups designed to empower members to tackle issues like health care reform, hunger, poverty and crime faced by urban and suburban neighborhoods. The Alliance of Communities Transforming Syracuse (ACTS) is a coalition made up of members from diverse racial, religious and economic backgrounds. Together they address “social, economic, educational and political concerns of their communities,” according to their mission statement. There are currently 36 member organizations and 12 of them are either Catholic parishes or Catholic organizations.

The group held a public action meeting on Nov. 1 at Henninger High School on Syracuse’s east side. The school’s auditorium was filled. Pastors sat with their congregations and Father Fred Daley, pastor of All Saints Church, gave the opening prayer. He was seated next to retiring diocesan director of Catholic Charities, Cindy Falise. The stage was occupied by leaders of Muslim, Jewish and Christian faith groups, including Father Daley, Falise and Father Greg Le Strange, pastor of St. Joseph’s Church in Camillus. His parish is one of the newest members of ACTS.

ACTS is an affiliate of the Gamaliel Foundation, an international community organizing network. It happens to be the same organization that trained President Barack Obama as a community organizer. The Gamaliel Foundation, according to the ACTS Web site, is “an organizing network of 60 affiliates in 21 states across the U.S. and five provinces of South Africa.” Its goal is to help community leaders to create, maintain and expand independent, grassroots and powerful faith-based community organizations. The point is to empower “ordinary people” to impact the “political, social, economic and environmental decisions that affect their lives.”

ACTS held a meeting in October of 2008 which attracted approximately 1,000 people. This latest public gathering was an update of sorts. Reports say it drew 1,200 people. Task force groups have been meeting since the 2008 gathering, working in committees to address the issues brought before them earlier. They reported back to the membership and to politicians — some of whom faced election within days — during the Sunday afternoon event.

ACTS President Rev. Kevin Agee, pastor of Hopps Memorial CME Church on Syracuse’s south side, opened the meeting and was later interviewed by the SUN. Rev. Agee is in his third year heading up his congregation. He has spent 20 years in church work in the Northeast and he said, unfortunately, that he has seen the same issues whether he was ministering in cities in New York, New Jersey or Connecticut.

“It’s the same once-thriving industrial cities with dissipated, abandoned factory buildings, stores out of business and jobs left the area — cities where there are extreme pockets of poverty,” Rev. Agee said. “You’ve got the politicians trying to resurrect these cities with luxury condominiums downtown, shopping malls, arenas and gambling casinos. Why don’t they include the people who live in the communities, the people who have stuck with the city, why not make them part of the process of economic development?”

Rev. Agee’s congregation is almost entirely African American. Hopps Memorial offers a hot meal program, food pantry and clothing giveaway. Members of his congregation live in a distressed area of the city where they have to face seemingly insurmountable obstacles just to get fresh fruits and vegetables for their families. One of the initiatives of ACTS is to bring a large supermarket into the neighborhood. Currently, corner stores sell outdated food merchandise and single cigarettes and cigars. Rev. Agee explained that transportation is an issue for many residents. If they wanted to travel to a large supermarket for fresh produce, they might have to arrange transportation with a friend or take the bus. “How many of these folks do you think have money to catch a cab?” Rev. Agee asked.

Newly-elected Syracuse Mayor Stephanie Miner was at the ACTS gathering on Nov. 1. The ACTS Southside Food Access Action Team wants the mayor’s office to apply for state funds under the Healthy Food/Healthy Communities Initiative. They say there is a unique health crisis on the south side and it’s directly related to the neighborhood’s lack of an affordable grocery store. The corner stores mark up merchandise making the prices exorbitant. The milk sold is not usually low fat. Residents suffer from high blood pressure, Type I and Type II diabetes, critical premature health problems and obesity. There are limited, if any, healthy food choices when shopping means a convenience store.

And it’s not just hunger on ACTS’ agenda. The organization asked Onondaga County Executive Joanie Mahoney to look into the Onondaga County Sheriff’s Office. They say the Criminal History Arrest Incident Reporting System (CHAIRS) program which was initially developed as a safety tool for responding officers, is now used as a money making venture that allows the public, including landlords and prospective employers, to pay $10 to look up individuals’ criminal records as a “background check.” They say the CHAIRS information is often misleading. The data base doesn’t include the outcome of an arrest. ACTS is calling on the Sheriff’s Office to stop public disclosure of the CHAIR reports.

The ACTS meeting followed a format where task force members would present a compelling testimonial or case that underlined their concerns. The ACTS Justice Task Force Chair Emily Napier brought two individuals up to the podium, a young man and a woman. The young man, Gabriel, told his story about drug addiction and a marijuana arrest in 2003. He also faced a DWI in 2007. The DWI sentence was reduced to a non-criminal charge. He said his CHAIRS report still shows both incidents without the resolved outcome. He completed addiction treatment two years ago for his heroin use. Today he is a second-year college student studying chemical engineering and trying to get his life together, which is difficult with his CHAIRS report still indicating his 2003 and 2007 arrests.

The woman, Lisa, told an unusual story involving her 1976 arrest for shoplifting in the Town of DeWitt. Her case was dismissed and the records sealed in part because she had no previous arrests and she was a teenager at the time. Lisa went on about her life and enlisted in the Navy. In 1986, she became a New York State police officer. She retired in 2006 and then went to college to become a social worker, going to graduate school to pursue her master’s degree. It was when she signed on to be a mentor with the city school district that Lisa discovered that her CHAIRS report/background check still listed her 1976 case as open. She said she has tried to resolve the issue but there is now no record of her 30-plus year old case in the Town of DeWitt and the Sheriff’s Office will not remove the information without a disposition. Lisa said unlike many others, she has the financial means to try to resolve her
case.

ACTS has met with the Sheriff’s Office but said they were told the CHAIRS program is providing a public service. ACTS says the program is in violation of New York State Human Rights Law 296(16) to consider arrest information or to compel an applicant to produce arrest information when making hiring decisions. Some movement on the issue may be in the works as the chair of the county’s Public Safety Committee has agreed to add the CHAIRS issue to its meeting agenda on Tuesday, Dec. 8 at 9 a.m.

ACTS Civil Rights for Immigrants Action Team told another story. Aly Wane, a Le Moyne College graduate who is a native of Senegal, works on  that particular task force. He spoke at the meeting, first asking if anyone there had been picked up on a “DWB” and after a show of a few hands, Wane said, “You know, Driving While Black.” He explained that there are too many people within the Syracuse community who are pulled over simply because of the way they look. He told his personal story of being raised by his single mother who was fortunate enough to be able to send Wane to the U.S. He said he loves the U.S. and the Syracuse community but that he had been pulled over in New York City, Chicago and now Syracuse.

“This has happened to me so many times that I was simply glad the police officer was polite this time,” Wane said.
Wane then introduced a couple to the audience. The husband is from Honduras and the wife is from the Syracuse area. The husband, Fred, went out to pick up a pizza for his family’s dinner and never made it home. He was pulled over and when the officer asked for his driver’s license he produced his license from Honduras. He was taken to Oswego and jailed for two months. His wife came forward and said she had a toddler and was eight months pregnant when this happened to her husband.

“I didn’t know where he was for three days,” she said. “I was afraid for my children, that their father was going to be taken from them.”

At the end of their presentation, Wane asked that elected officials commit to a dialogue resulting in a concrete policy addressing racial, ethnic and religious profiling. ACTS also asked Congressman Dan Maffei to co-sponsor the Child Citizen Protection Act (HR182) that will restore discretion to immigration judges hearing cases of parents of U.S. citizen children, and to fight to keep that provision in any reform policy.

ACTS task force committee members continued to speak and deliver a strong message that was heard loud and clear by policy makers. Representatives from the local and state level were either present or sent someone to listen to the presentations.

Father John Manno, pastor of St. James Church in the Valley neighborhood of Syracuse, said the main reason his parish joined ACTS was that it puts them in touch with other faith traditions and that ACTS gets results.

“We recognize that if we work together we can do more to build up our community,” Father Manno said. “As a community of faithful we’re called to transform the area around us and not just the church where we go. ACTS has been very successful at reaching out to lawmakers on the local, state and national level.”

ACTS also includes a Youth Task Force, an Economic Development and Jobs Task Force, and a Health Care Task Force. Over the past two years, the Health Care Task Force was been committed to insuring children in Onondaga County. Through Child Health Plus, more than 9,000 youngsters are benefitting from health care. According to ACTS, there are still approximately 8,000 who are eligible but not enrolled. The organization states that estimates for Central New York count more than 63,000 adults without health services. The group’s basic premise is that health care is a right and not a privilege.

Mark Spadefore is a union organizer by trade and a member of St. Joseph the Worker Parish in Liverpool. He chairs the committee that oversees all the task force committees. He says his work with ACTS brings his faith and his organizing activities together.

“My faith is more alive for me now,” Spadefore said. “Like it says in Scripture, ‘Faith without works is dead.’ This work fulfills me as a Catholic and I love that it’s interdenominational. What makes ACTS powerful is its urban-suburban blend. Issues like health care affect people everywhere.”
Roots for this organization are taking hold  in the greater Syracuse community and members of the Catholic Church are finding a place where their cries for justice are being heard.