As recently as 2005, the grassroots activist community-organizing group ACTS — Alliance of Communities Transforming Syracuse — was sputtering along with a membership of seven local churches, largely located within Syracuse’s limits.

In the last few years, however, the organization has blossomed to include 32 faith communities throughout Onondaga County.

ACTS was founded in Central New York in 2000, but struggled towards the end of 2004, according to director and lead organizer Andres Dae Keun Kwon.

“I think we have a dynamic force that is bringing together the spiritual energy of all the congregations involved for justice,” said Peter Sarver, a St. Lucy’s Church parishioner who is the co-chair of ACTS healthcare task force.

Sarver is a lay person who has taken on a leadership role in ACTS as co-chair of the healthcare committee.

Sarver worked in healthcare management for nearly three decades as executive director of Hospice of Central New York before retiring to teach at Keuka College and Le Moyne College. He has been involved in a great deal of grassroots activism since then.

The healthcare committee focused primarily on the nearly 8,000 young people in Onondaga County who are eligible for Child Health Plus, a federal insurance plan designed to help the children of the working poor, who do not receive healthcare benefits. During the last two years, the committee established a loose coalition with the area’s four major health insurance providers, the county government and social services. The ACTS committee met with the other organizations to determine what some of the barriers were for people. They also secured the support of County Executive Joanie Mahoney after she attended a meeting of 800 members.

The coalition was successful in finding coverage for approximately 1,000 young people.

Kwon cited the Child Health Plus campaign as one of ACTS’ most substantial victories to date.

“We’ve actually accomplished quite a lot,” he said.

According to the organization’s Web site, “The Alliance of Communities Transforming Syracuse is an inter-faith, multi-racial, urban-suburban, diverse coalition of faith communities throughout the greater Syracuse area that organizes with the mission to address the social, economic, educational and political concerns of our communities. Through a process of dialogue, education, training and action, ACTS seeks to empower member faith communities to act on the shared values of human worth, dignity and justice.”

Father Jon Werner, the pastor of St. John the Baptist and Holy Trinity Churches in Syracuse, joined ACTS nearly five years ago. He believes the organization has been very successful in generating a network of parishes and expanding its base outside the city of Syracuse.

“The city parishes don’t have the resources of the suburban parishes,” he said. “I think it’s good to bring these groups together.”
Father Werner attributed the success of ACTS to its energetic leadership, but stressed that it needs to avoid stagnating.

“They’re at a crossroads,” Father Werner said. “They’ve done a good job community building and they have the ear of legislators. They need to keep the same energy and vigor without becoming too institutionalized. Sometimes when you have a grassroots effort, it’s focused on a mission but when it becomes an institution, it becomes focused on sustaining itself.”

All Saints joined ACTS shortly after the parish formed through the merger of St. Therese of the Little Flower and Our Lady of Solace. Father Fred Daley said that the ACTS’ mission complemented his own ministry. 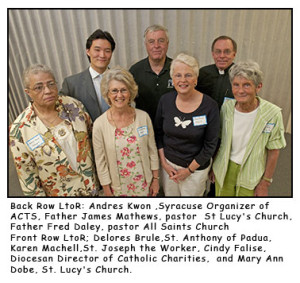 “I am really impressed with their goals of making our community a little better and a little safer,” Father Daley said. Father Daley was attracted to the interfaith composition of the organization.

“I’m particularly moved that it’s a viable interfaith group,” he said, adding that the county-wide aspect is appealing. “It’s not just the city but it’s the city and the county working together.”

According to diocesan Catholic Charities Director Cindy Falise, ACTS has evolved into one of the most powerful organizations of its kind in New York State.

ACTS is funded through membership dues paid by the faith communities as well as a few likeminded organizations and individuals. In addition, the organization holds an annual fund raiser. Catholic Charities supports ACTS through two grants funded by the Catholic Campaign for Human Development. According to Falise, Catholic Charities’ support for ACTS began with her predecessor, Dennis Manning. Falise noted that Catholic Charities and ACTS share a common mission.

“What they do is what we do,” she said. “They are empowering the poor to stand up for themselves.”

In addition to growing in terms of the number of communities involved, ACTS has also developed more influence. In October ACTS held a meeting at Most Holy Rosary Church, which drew 1,000 people as well as municipal, county and state lawmakers.

ACTS’ parent organization at the national level is Gamaliel. Kwon noted that Gamaliel’s executive director, Gregory Galluzzo, is a former Jesuit and said that many of the organization’s principles are rooted in the kind of social justice supported by Catholicism. “A lot of the values that this kind of organization is rooted in are based on Catholic social teaching,” Kwon said.

Kwon was careful to stress that ACTS is not a charity organization, per se. He detailed the three guiding principles upon which ACTS was founded as “doing justice, loving mercy and walking with God.”
In order to discover which issues to concentrate on, Kwon said the ACTS members conducted a “listening campaign” within their own faith communities. The ACTS members arrived at seven key concerns for their communities and then voted to determine which three would be their focuses.

The vote results revealed criminal justice as the top concern, followed by youth. Healthcare and economic development and jobs tied for third. ACTS decided to include a fourth campaign rather than choose between the final two. ACTS then established four sub-committees addressing each issue.

Kwon, a parishioner at St. Lucy’s, is among those credited with the more recent expansion of ACTS’ membership and influence. He said that his main task is enhancing the profiles of the member community’s leaders.

“The important thing here is that the leaders of  ACTS get the spotlight,” he said, noting that the organization’s leaders are both clerics and lay people.
“The leaders bring so much energy and passion.”

One such leader is ACTS treasurer Karen Machell, a retired Phoenix School District teacher and a parishioner at St. Joseph the Worker, a parish that Kwon said was crucial during ACTS reorganization period.

According to Machell, her involvement in ACTS came about when a spiritual realization converged with a suggestion from St. Joseph the Worker pastor Father Charles Major.

“In terms of my own personal faith journey, I wanted to get involved in faith justice issues,” she said.

Machell said that her purpose was twofold: one, to connect her faith values with society and, two, to educate herself on social and political issues. During her first year of involvement, Machell was active in the economic development and jobs committee but since then her role as treasurer has occupied her free time.

Saturday, June 13, ACTS held a training session for its members and other activists. June 24, the group will travel to Washington, D.C., to participate in an interfaith rally for healthcare and also to meet with legislators. Its next candidates meeting will be held in September followed by its public meeting Nov. 1. Kwon said ACTS is planning on 1,200 to attend the public meeting.