Reconfiguration: learning from a success story 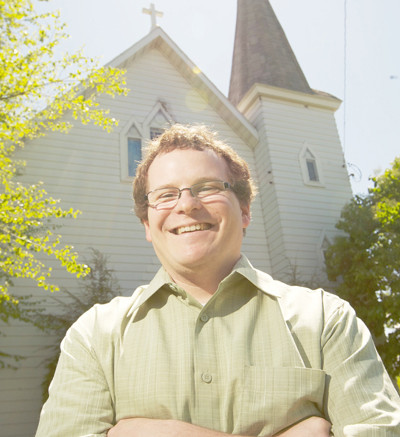 A sociology professor at Le Moyne College has recently earned a grant of almost $25,000 toward the study of parish mergers in the Syracuse Diocese. The grant comes from the Louisville Institute, a Lilly Endowment-funded center which supports research on American religion.

The grant will help Matthew Loveland, assistant professor of sociology at Le Moyne, conduct a six-month case study of one church in the City of Syracuse that has recently undergone a merger.

Entitled “Looking for a New Way to Be Church: Managing the Personal and Organizational Consequences of Parish Merger,” the study may sound scholarly, but Loveland said he hopes the project will also have practical applications for parishes undergoing reconfiguration.

“One way to do that was to study a parish that, by many accounts, was a successful merger,” Loveland said.

That’s why he said he chose the church he’s going to be studying. “Two of the things I’m going to be looking at are: one, is it as successful as I hear from the people who are involved in the parish; and two, assuming that it is a success — why?”

The parameters of the grant require confidentiality, so Loveland can’t name which parish he will be working with or any of the parishioners he interviews.

He can say, however, that one of the factors that he thinks made the merger of this particular parish so successful is that the two churches came together under a new name. “I think that renaming the parish is a very wise move. It gives everyone a sense that this is something new,” Loveland said.

It’s also important for pastors to acknowledge how upsetting reconfiguration can be for parishioners. “I think it’s important to have a pastor who says, ‘I know it’s hard.‘ It’s as simple as that, right? Just a simple recognition that this is a difficult thing to do, it goes a long way.”

Most of all, Loveland said, it’s imperative for strong parishes to be able to answer two questions, “‘Who are we as a parish?’ and ‘How do we do that?’”

In the research that Loveland has already done in parishes throughout the diocese, he has found that those with clear answers to those two questions are typically stronger than parishes that cannot answer those questions. “If you have a plan, you can motivate people. People who are motivated are people who are willing to give time,” he said.

But while some of the factors that make for strong parishes may be relatively easy to define, Loveland said the effect of reconfiguration on parishioners is much more complex.

“There are some people who experience it almost as nothing. They agree with the diocese that there aren’t enough priests and there are too many churches,” he said. “Then there are other people who don’t even buy that argument and they think the church should give more responsibility to deacons. They’re saying that [merging churches] isn’t the only option.

“Then there’s a third group that’s very upset that their parish is closing and they’re losing a place that’s very meaningful for them. It really means something, a lot more than just where you go to Mass.”

With so many strongly-held opinions about a place that can have incredible spiritual and emotional significance, the situation can become polarizing pretty quickly, Loveland said.

Many people from parishes that have been a part of the reconfiguration process say that they feel a lack of trust toward the diocese, Loveland said.

“People expect a certain kind of care from their priest and the bishop. They expect them to be caring and they expect them to be pastoral. And they find it really hard to see closing parishes as caring. But at the same time, if you look at it from the perspective of the bishop, it’s very difficult to run a church where there are all these parishes that are shrinking,” Loveland said.

“I think that the diocese and the bishop are thinking long-term, and I think that there are emotional aspects to this that make it harder for some people to think that way,” Loveland said. Yet there are also, he said, potentially legitimate and viable ways of keeping some churches open that could be explored as well.

Parish reconfiguration has been a process decades in the making. “In a lot of ways this has been happening for the last 20 years,” Loveland said. And he said it’s something Father Jim Lang, vicar for parishes, has been thinking about and studying since the early 1980s.

Father Lang said the Syracuse Diocese first began thinking about the future leadership of parishes around 1978, when a pattern of marked decline in the number of men entering the seminary became evident. In 1983 a study was conducted of every parish community and the way in which ministry was, and could be, carried out.

“What we didn’t anticipate at the time was the impact of industrial closures and people leaving the diocese,” Father Lang said. Added to this was the migration of parishioners away from the urban parishes and into the suburbs.

Father Lang is very involved in studies regarding the reconfiguration process, and he said this is something happening not only across the country, but in other faith communities as well.

Father Lang said current research is ongoing studying all of the Catholic dioceses and archdioceses throughout the country. For his part, he has spent six years on the board of the Conference on Pastoral Planning and Council Development. He is also involved with the Emerging Models of Pastoral Leadership project which, like Loveland’s study, is funded by the Lilly Endowment. He’s particularly proud of the fact that in 2003 in a study funded by the Kucera Center for Catholic Studies, the Syracuse Diocese was rated as the second most successful dioceses in its reorganization efforts.

“I think Matt’s going to make a real contribution, and one of the things I suspect he’ll discover is that leadership helps,” Father Lang said. “If the pastor is committed to it, it works.”

He said he also thinks that Loveland’s study is unique in its concentration on the experience of one parish. “Take a list of the parishes that have merged and every one of them has a different story, but there is common ground, and that’s worth looking into,“ Father Lang said.

Loveland said that he hopes to provide an objective presentation of the merging process. “I’m not trying to say that it’s good or it’s bad,” he said. “The trouble when you‘re talking about religion is that it’s so close to morals and ideas of right and wrong, and you can get so close to value judgments really quickly.”

This summer, Loveland and his team of researchers will begin the study by asking parishioners of the Syracuse church questions about their own take on the merging of the two churches. Focus groups will be asked questions like whether they think the parish has met the goals they had set out at the merger, how they were involved in the process of the merger, whether it made sense to me
rge the churches, what they valued about their old church and whether they can find that same value in this new church.

“One of the things I’ve been trying to learn about is what exactly a parish is,” Loveland said. “I mean, a parish is a place where sacraments are performed, but obviously it means more than that as well.”

This is especially the case for churches where a family’s weddings, baptisms and funerals may have been celebrated for generations. A church parking lot may be where neighborhood men might come together to play basketball, there could be a food pantry that helps area families in need, or the church might host a seminar or concert that even non-Catholics would attend. Parishioners might drive miles out of their way to attend Mass at a church that they feel represents their sense of identity.

“If it was just a matter of going to Mass, well you can find other places for that,” Loveland said.

Yet he said he believes that changes in the structure of the church have led to changes in the way that Catholics might participate in their faith. “I have not spoken with anybody who has said, ‘I’m not going to be Catholic anymore.’ But I think the way that they practice being Catholic has changed.”

“We’re particularly looking at how young Catholics, especially those with families, respond to the merger,” Loveland said. “Long-term, there will be a church or there won’t depending on how they respond.”

As part of his project, Loveland is also studying a grassroots group called the Council of Parishes Upstate NY. The group is trying to stop the diocese’s present process of merging churches and hopes to come forward with a new process that involves collaboration with the laity. “I’m following this organization, basically wanting to see how they think about and talk about reconfiguration,” Loveland said.

Loveland will discuss some of his research at a meeting of the Council of Parishes Upstate NY on May 22 at 8:30 a.m. in the Bishop Harrison Faith Center, 1342 Lanaster Ave. All are welcome.

Loveland also invites those with a story about their reconfiguration experience to contact him through the project website at www.lemoyne.edu/parishproject.

“I’ve been in sociology for 15 years and no one’s ever been interested in what I’m doing,” Loveland said, laughing. “But this is a time where this is happening throughout the whole country, not just in Syracuse.”