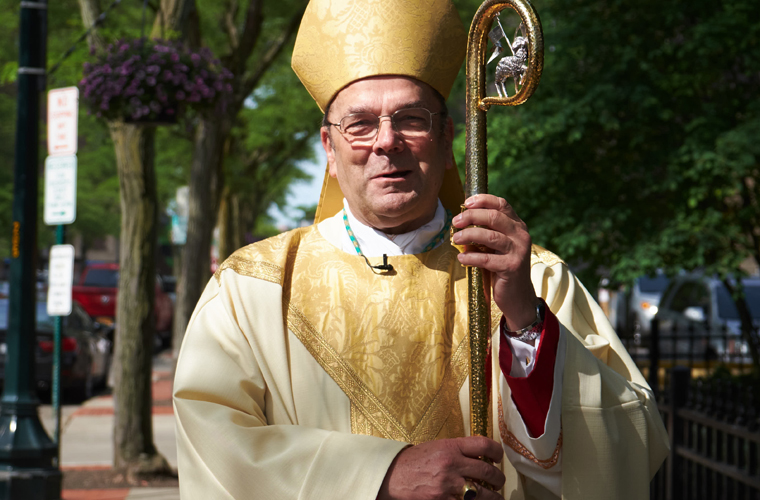 On Monday, Oct. 23, I celebrated the traditional Red Mass for judges, attorneys, law professors, and government officials at the Cathedral of the Immaculate Conception. This annual celebration invokes God’s blessing and the guidance of the Holy Spirit on those responsible for the administration of justice. The homily I gave on that occasion is printed below.

I begin with a beautiful passage from the Book of Wisdom that I pray often: “God of my fathers, Lord of mercy, you who have made all things by your word and in your wisdom have established man . . . to govern the world in holiness and justice. . . give me Wisdom . . .for I am your servant . . . a man weak and short-lived and lacking in comprehension of judgment and laws. Now with you is Wisdom . . . Send her forth that she may be with me and work with me, that I may know what is your pleasure” (Wis 9:1-6, 9-11).

The tradition of the Red Mass has its origin in 13th century France in the famed Sainte Chapelle of Paris during the reign of King Louis IX. The John Carroll Society, a lay Catholic group of prominent lawyers and professionals, initiated the Mass in the United States in 1953 “to invoke God’s blessings on those responsible for the administration of justice as well as for all public officials.”

It is a joy to welcome you to the Cathedral of the Immaculate Conception and to pray with you as we celebrate this year’s Red Mass. Esteemed judges, lawyers civil and canonical, members of law enforcement agencies, and your all-important collaborators — yours is a lofty and noble vocation. You are called to serve individuals and society in areas that safeguard and promote the dignity of the human person, preserve our freedom, and protect the common good. This is a tall order. Surely, divine guidance is necessary if you are “to render judgment in integrity of heart.” Thus, we pray, “Lord, send forth your wisdom!”

From the abundance of His goodness and love, God calls every person into existence. “Created in the image of God and equally endowed with rational souls, every person has the same nature and the same origin. Redeemed by the sacrifice of Christ all are called to participate in the same divine happiness; all therefore enjoy an equal dignity” (Catechism of the Catholic Church, #1934). How important it is to recognize the dignity of the human person created in the image and likeness of God.

When Pope Francis visited the United States in 2015, he referred often to the dignity of the human person. He reminded bishops that they are stewards of God’s gifts which include “the innocent victims of abortion, the children who die of hunger from bombings, immigrants who drown in the search of a better tomorrow, the elderly or the sick who are considered a burden, the victims of terrorism, wars, violence and drug trafficking” (St. Matthew’s Cathedral, September 3, 2015). To Congress he said, “You are called to defend and preserve the dignity of your fellow citizens in the tireless and demanding pursuit of the common good, for this is the chief aim of politics . . . which must serve and promote the good of the human person” (Address to Congress, September 24, 2015).

Most recently in speaking about the death penalty Pope Francis reaffirmed the sacredness of the human person. “It must be clearly stated that the death penalty is an inhumane measure that, regardless of how it is carried out, abases human dignity. It is contrary to the Gospel, because it entails the willful suppression of a human life that never ceases to be sacred in the eyes of its Creator and of which — ultimately — only God is the true judge and guarantor. No one ought to be deprived not only of life, but also of the chance for a moral and existential redemption that in turn can benefit the community” (Address to Pontifical Council for Promoting the New Evangelization, October 11, 2017).

In light of pending legislation in New York State, assisted suicide is an issue of particular importance in New York State. “Several bills have been introduced in our state that would fundamentally alter the doctor-patient relationship by authorizing physician-assisted suicide for individuals declared by a doctor to be terminally ill. New York’s bills lack important safeguards, making coercion or misapplication of the law a serious threat. Furthermore, they send a dangerous message to society that when someone is considered a ‘burden’ to someone else, his or her life is no longer worth living. While New York rightly spends millions of dollars a year to combat suicide, it is considering undermining these efforts significantly by declaring that oftentimes suicide is ‘death with dignity.’ The not-so-subtle implication is that those who choose to fight for their lives or simply allow themselves to die a natural death are somehow undignified” (Assisted Suicide Legislation is Bad Medicine for all New Yorkers, NYS Catholic Conference website).

We do not live in a perfect world. We need only to look at ourselves to acknowledge that we do not always make the good choices that we should and indeed we sometimes choose what we should not. I think this is what St. Paul had in mind when he said, “What I do I do not understand. For I do not do what I want, but I do what I hate” (Rm 7:15). And going beyond ourselves, we need only read the daily newspaper or listen to the evening news or, in your case, be confronted with the situations and issues that you face.

Benedict XVI reminded us, “Our lives are involved with one another, through innumerable interactions they are linked together. No one lives alone. No one sins alone. No one is saved alone. The lives of others continually spill over into mine: in what I think, say, do and achieve. And conversely, my life spills over into that of others for better or for worse” (Spe Salvi, 48). The human person does not live in isolation. He or she needs to live in society. Society is not an extraneous addition but a requirement of nature. A person’s full potential is developed through interaction with others.

Today we are challenged by many issues which jeopardize the dignity of the human person and the well-being of society: discrimination based on sex, race, color, social conditions, language or religion, harassment and bullying that not only threaten but invoke violence, assaults on the most vulnerable — the unborn, the elderly, the disabled, the immigrant. Your professions bring you into direct contact with these issues. Certainly, your study, diligence, and experience equip you to address them. But you, and all of us called to uphold the dignity of the human person, need the gift of wisdom.

Perhaps you remember the story about Solomon when he was the young king of Israel. God gave Him the opportunity to ask for what he wanted. Solomon asked, “Give your servant an understanding heart to judge your people and to distinguish right from wrong” (1K 3:9). Simply put I think this passage reminds us that we cannot govern wisely without God’s help and His wisdom as we tend to the people and the situations that are brought before us.

My deep gratitude for all you do to safeguard and promote the dignity of the human person, preserve our freedom, and protect the common good. At this Mass, and throughout the year, be assured that I pray for you. I ask that you remember me in prayer as well.