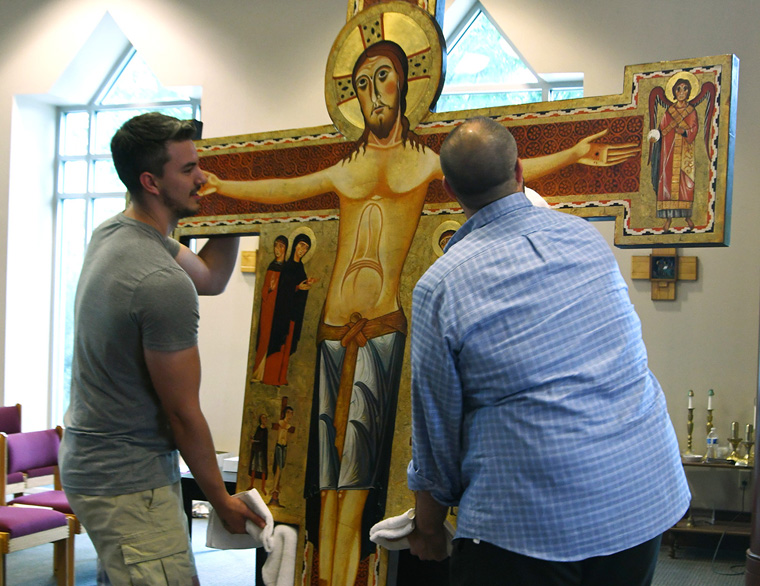 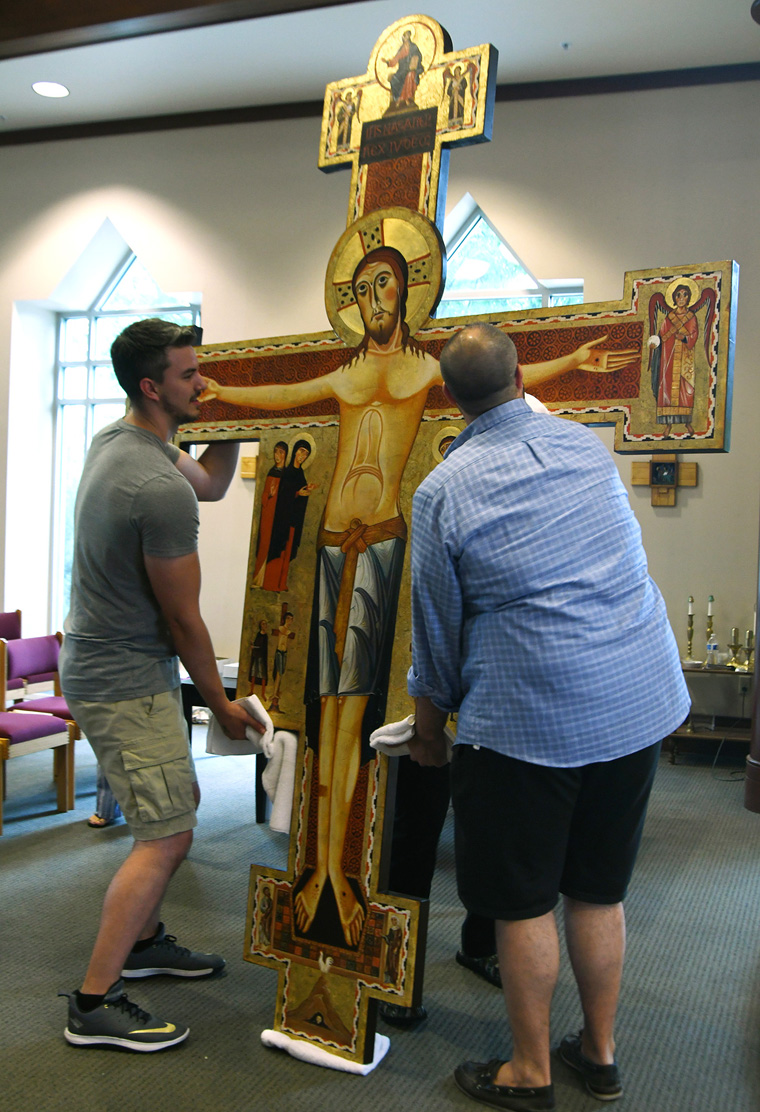 SALT LAKE CITY (CNS) — From the crucifix, Christ looks out with open eyes, head raised, halo bright, his wounds visible but inconsequential against his serene visage.
The image is known as “Christus triumphans,” Christ triumphant over death. It’s the image before which St. Catherine of Siena prayed while on a mission in 1357 to Pisa, Italy, sent there by Pope Gregory XI to urge the city leaders to remain faithful rather than join the anti-papal movement.

From the image emanated the power that gave St. Catherine the stigmata, the bleeding wounds corresponding to those of the crucified Christ. The event led to the image becoming known as the Cross of the Stigmata. The cross was moved in 1623 from Santa Christina Catholic in Pisa to St. Catherine’s home in Siena, where it can be seen today.

A replica of the cross was installed Aug. 7 at St. Catherine of Siena Newman Center in Salt Lake City. Like the original, the replica has side panels that depict Mary, the beloved disciple and two other sorrowful figures, as well as the thieves who were crucified alongside Jesus. Angels bearing balls of incense stand beside Jesus’ outstretched hands.

The parish council commissioned the replica because the community wanted a closer identity to their patron saint, Father Buda said.

Learning about the Cross of the Stigmata, “We thought, ‘That would be fantastic if we could find a way to have it.’ Our idea was to see Christ the way St. Catherine saw him,” he told the Intermountain Catholic, newspaper of the Diocese of Salt Lake City.

“This is an important moment for the church around the world, when we must go deeper into our faith in the face of infidelities and corruption,” Father Buda continued. “We are blessed with a patron saint who was a beacon of light and faith during a similar time of upheaval in the mid-1300s, and this cross connects us to her and Christ in a meaningful way.”

Today, the original cross is missing two portions: one over Christ’s halo and the other beneath his feet. The replica includes those portions. The bottom piece depicts a white rooster atop a cave that contains a skull. The upper piece has the traditional inscription above Christ’s head, INRI, as well as an icon of Christ Pantocrator, or Christ almighty.

“Whatever is missing from the (damaged) original was borrowed from crosses from the same period and the same (geographical) area, so nothing on this cross is made up,” he explained.

When St. Catherine saw the original cross, it was about 200 years old. To simulate the aged appearance, the replica’s finish is finely cracked. Achieving the required look came about by mistake, said artist Nadiya Savka, who spent months researching and creating the piece.

Wanting to make the cross look old, Savka tried several techniques and materials but was unable to produce the proper result. Then, while working on the sample board, she accidentally switched the product she was using, “and it gave me the perfect crackles,” she said.

She called the mistake something of a miracle, one of several that occurred while she was working on the cross.

Savka, a native of Ukraine who now works in Chicago, was recommended to Father Buda because she earlier had created a piece for St. Ambrose Parish in Salt Lake City.

A Catholic, Savka said she prayed before every painting session, asking God to help her inspire her work. Her prayers were answered, she said, when another “miracle” occurred on a day when, after unsuccessfully trying two different techniques to achieve the look she wanted, she took a nap. When she returned to the cross she found a something that worked.

Tears welled in Savka’s eyes as she stood at the back of church that is part of the center and looked at the cross that moments before had been hung in place behind the altar.
“I didn’t think it was going to look that way, that beautiful,” she said. “The gold looks the way I wanted to see it.”