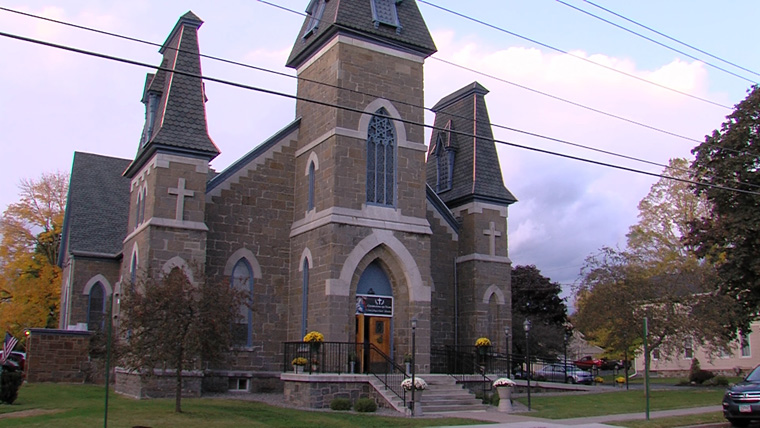 Newly appointed pastor Father Jason Hage faced an immediate challenge when he entered his ministry in Southern Madison County in 2017.

“It was my first assignment and my first real financial challenge,” he said.

While St. Mary’s in Hamilton is a lively parish family, the building itself is an icon for the entire community. This was illustrated when the unexpected building and financial hurdle occurred, bringing the community together in an act of unwavering support and strengthening of the church. It culminated in the Rite of Rededication celebrated Sept. 26 by Bishop J. Douglas Lucia with Father Hage as concelebrant.

The building’s original slate roof and three towers were failing. The roof was 30 years past its lifespan, Father Hage said, and falling slate put people at risk. Some contractors advised removing the towers altogether, he said, which was not acceptable to parishioners. Some estimates were as much as $180,000, he added, “and depleting our savings to do the work put me on edge.” Interior work was needed in the building as well. “The flooring and pews were in desperate need of some help,” he said.

Father Hage and the parish finance committee began brainstorming and realized that the upcoming year would be the parish’s 150th anniversary and the celebration would also provide a timely avenue for a capital campaign. “It was a way for us to say that this would be a new chapter in our history,” Father Hage said.

With the diocese’s immediate approval and the assistance of Jack Kearns, a Buffalo-based fundraising consultant, a plan was put into motion. Father Hage said a “lofty” goal of $400,000 was set which Kearns advised would be an aggressive target. But when the silent phase of the campaign began, $125,000 was raised in only two weeks. “The whole project with the towers was nearly paid for before the public phase even began,” Father Hage said.

In February, parishioners were offered four different ways to direct their charitable gifts: the towers, the flooring and pews, interior paint, and the church basement. Father Hage said “without any pressure from me,” the goal was met eight weekends later. By the end of Lent $500,000 was raised, far surpassing the goal and expectations.

Kearns reported that usually 25 percent of households in a parish will donate to a building project and 40 percent is rare.

“It’s a very small parish,” Kearns added. “That was my concern, and everyone has their own personal circumstances that might prevent them from participating at the time.”

Sixty-two percent of St. Mary’s families contributed. Kearns called it “the miracle in Hamilton and the people who made the impossible possible.” He attributes the success to Father Hage’s leadership and vision and how he engaged the community.

“I think timing was everything,” said Father Hage. “It was the right timing and the right relationships. They realized that as a parish we need to do our part to safeguard our future.”

Construction began in June. By last week the towers and roof were complete and the interior, other than the beautiful murals, was repainted in rich jewel tones. Lustrous metallic and iridescent finishes around the window arches came from Milan, Italy. The gleaming trim will last 40 years, Father Hage said, adding that all materials were chosen to be those with the longest lifespan possible.

Father Hage said the Syracuse Diocese Building and Grounds team, headed up by Ed King, Mike King, and Scott Clemens, bid on and was awarded the project.

“They handled our towers and helped us with the decision-making with other contractors. They’re our heroes for sure. They’re very selfless and generous men,” he said.

In addition, the interior painting was handled by Richard Laske of Scranton, Pa. Laske also worked in conjunction with Kevin Greer of Syracuse to restore and refinish the woodwork, Father Hage added. Pew restoration was done by The Keck Group out of Middletown, N.Y., and the flooring was done by Enjems of Utica. Father Hage said many of the contractors on the project had worked on the recent restoration of the Cathedral of the Immaculate Conception in Syracuse. Their combined craftsmanship and professionalism resulted in a smooth process and a successful project.

But what renovation project would be complete without finding some hidden treasure in the walls? Painted 1970’s paneled walling was removed to reveal not only the original oak wainscoting, but ALSO the stunningly detailed choir railing that was created by Irish immigrants who worked on the Chenango Canal.

“It was a gem, a historical treasure, really,” Father Hage noted.

Following the rededication Mass, Father Hage said that the restoration was not only a building project, but also a true restoration in that “God sees you and calls forth what is hidden in your soul.”

The project reinvigorated parishioners and reached beyond the parish itself. Attendance at Mass has swelled, he added. At times, there is not enough seating for the 11 a.m. Mass.

The second reading at the rededication was Ephesians 2:19-22: “So then you are no longer strangers and sojourners, but you are fellow citizens with the holy ones and members of the household of God, built upon the foundation of the apostles and prophets, with Christ Jesus himself as the capstone. Through him the whole structure is held together and grows into a temple sacred in the Lord.”

“It has had an impact on all denominations. It’s amazing for us as spiritual leaders to see any faith community come together like this and grow,” Father Hage said. Special guests making up the ecumenical community in Hamilton sat in a reserved section of pews at the rededication.

Bishop Lucia said in his homily, “Isn’t our story here about letting that light, taken from this place, out into the world.… We are invited not to keep God here but to take God with us — that candle that cannot be blown out.”