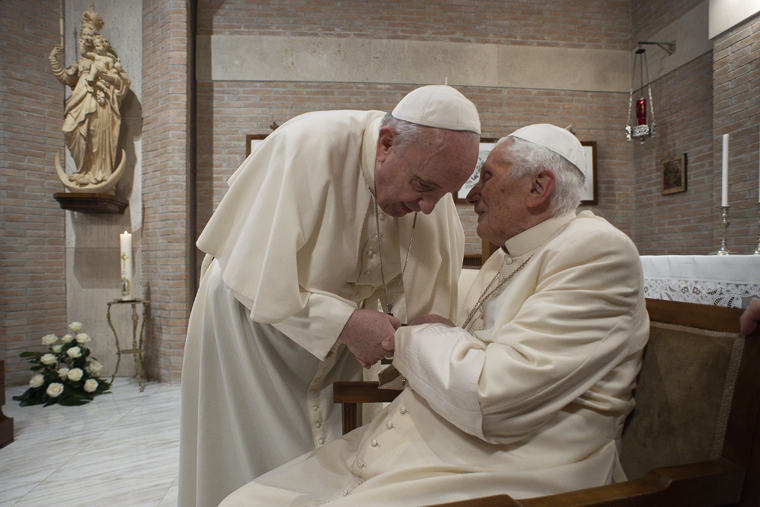 VATICAN CITY (CNS) — Pope Francis was among those showing their support for retired Pope Benedict XVI, sending his predecessor “a beautiful letter,” according to the former pope’s secretary.

In the letter, Pope Francis “speaks as a shepherd, as a brother” and “expressed once again his complete trust, his full support and also his prayers,” said the secretary, Archbishop Georg Gänswein.

The archbishop spoke to the Italian news program TG1 Feb. 9 about the retired pope’s letter in response to a report on sexual abuse cases in the German Archdiocese of Munich and Freising, which the former pope headed as Cardinal Joseph Ratzinger from 1977 to 1982.

Pope Benedict, who has denied allegations of mishandling four cases of clerical sexual abuse put forth by the report, emphasized in a letter Feb. 8 his feelings of great shame and sorrow for the abuse of minors and made a request for forgiveness to all victims of sexual abuse.

Archbishop Gänswein was asked to respond to criticisms by some victims’ advocates and media in Germany that Pope Benedict’s apology was insufficient.

“Whoever reads the letter in a sincere way, the way in which the letter was written, cannot agree with these criticisms or these accusations. He asks all victims of abuse for forgiveness,” he said.

The archbishop, who started working with the former pope in 1996 at the Congregation for the Doctrine of the Faith and became his personal secretary in 2003, was asked how he saw the pope react to the growing abuse scandals during his tenure.

A clear indication of how the pope felt, the archbishop said, can be seen in the meditations he wrote as cardinal for the Good Friday Way of the Cross in 2005, writing forcefully about how much “filth there is in the church,” even among those in the priesthood.

There are measures, documents and evidence that show how much he, first as Cardinal Ratzinger, then as Pope Benedict, did “in order to make progress in a cleanup from within in a suitable way,” Archbishop Gänswein said.

Asked about the allegations of mishandling of abuse cases when the pope was archbishop of Munich, the aide said no evidence of his guilt was presented in the report.

“The accused does not have to prove his innocence,” he said. “If they have proof, then they must say, ‘This is the proof you are guilty.'”