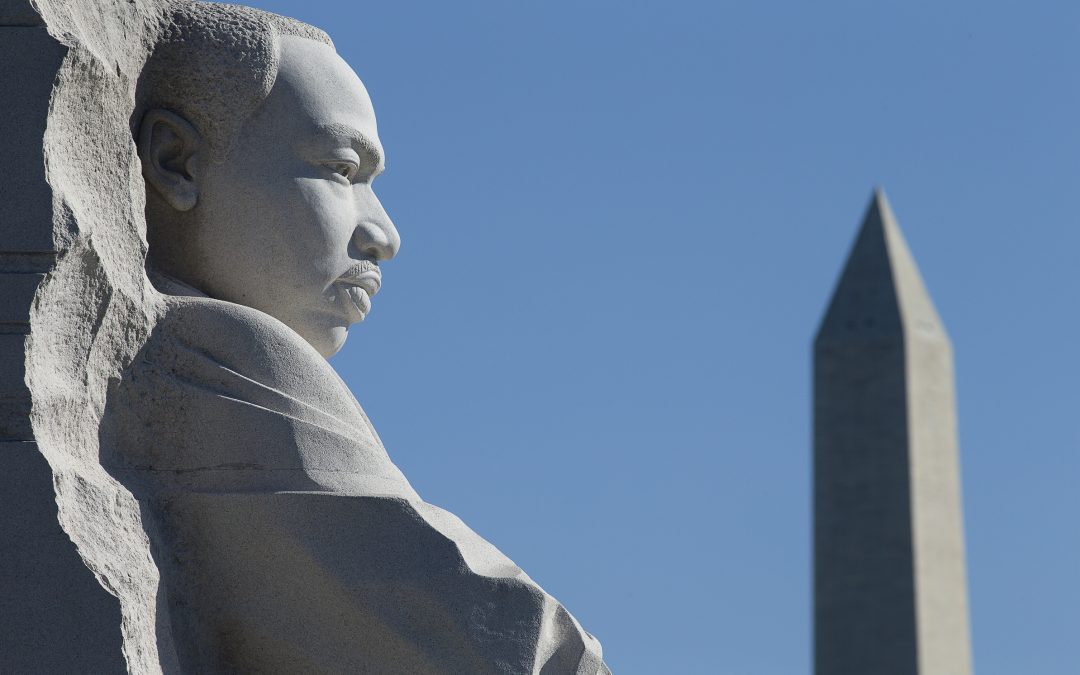 WASHINGTON (CNS) — The Rev. Martin Luther King Jr.’s support of nonviolence to bring about social change applies as much to today’s society as it did when Rev. King put his philosophy to paper 60 years ago, said speakers at an Oct. 2 news conference at the memorial dedicated to the civil rights figure in Washington.

That the news conference was scheduled in advance of, and held the day after, the Las Vegas shooting spree that killed 58 people and injured more than 500 only underscored the importance of Rev. King’s message, according to the speakers.

“It’s hard to find something in times like these that doesn’t sound like cliches,” said Bishop George V. Murry of Youngstown, Ohio, chairman of the U.S. bishops’ Ad Hoc Committee Against Racism. “As a society, we need to stop making excuses and commit to nonviolence.”

He added, “Pope Francis speaks of the earth as our common home. So it is. And so it is with our society. … It is so easy to speak of human dignity,” he noted, “but do we believe it selectively — applying it to some people but not to others?”

Bishop Murry, who is African-American, acknowledged he has been the target of racism and segregation. One of the more frustrating episodes for him, he told Catholic News Service, was when a white airline passenger called for a flight attendant because he did not want to sit next to Bishop Murry.

Rev. King’s essay, “Nonviolence and Racial Justice,” appeared in the Feb. 6, 1957, issue of the Christian Century, a theological journal. It laid out his principles for acting nonviolently to seek change.

In his essay, Rev. King wrote: “How is the struggle against the forces of injustice to be waged? There are two possible answers. One is resort to the all too prevalent method of physical violence and corroding hatred. The danger of this method is its futility. Violence solves no social problems; it merely creates new and more complicated ones. Through the vistas of time a voice still cries to every potential Peter, ‘Put up your sword!’ The shores of history are white with the bleached bones of nations and communities that failed to follow this command.”

One of the points Rev. King made about nonviolent resistance as an alternative is that it “does not seek to defeat or humiliate the opponent, but to win his friendship and understanding.”

“The nonviolent resister,” he said, “must often express his protest through noncooperation or boycotts, but he realizes that noncooperation and boycotts are not ends themselves; they are merely means to awaken a sense of moral shame in the opponent. The end is redemption and reconciliation. The aftermath of nonviolence is the creation of the beloved community, while the aftermath of violence is tragic bitterness.”

“Things looked bleak, and the violence was real, but Rev. King held that high ground. And people rallied to him,” said Carl Anderson, supreme knight of the Knights of Columbus, which sponsored the news conference. “He understood that there were two non-negotiable principles in our democracy: first, that all are created equal and are entitled to the equal protection of our nation’s laws; second, that in our democracy, there can be no place for political violence.”

The United States has many challenges, including renewed racism by groups like the Ku Klux Klan, he said, noting that from its founding in 1882, the Knights as an organization “has long assisted the cause of racial equality.”

Anderson added, “Today, as then, we stand united in the principle that all are created equal, and we reiterate the words of Pope Francis last month calling for ‘the rejection of all violence in political life.’ We believe the way of nonviolence is as relevant today as ever.”

“Dr. King is still the beacon of the way forward,” said Bishop Charles E. Blake Sr., presiding bishop of the Church of God in Christ, in remarks delivered by Bishop Edwin C. Bass, president of the denomination’s Urban Initiatives. Bishop Blake added that 2018, the 50th anniversary of Rev. King’s assassination, should be seen as “the year of Martin Luther King Jr.,” with programs and conferences to renew the commitment to nonviolence.

The Rev. Eugene Rivers, founder and director of the Boston-based W.J. Seymour Institute for Black Church and Policy Studies, called this moment “a biblical opportunity to be salt and light in the midst of this political darkness. … We have to learn how to disagree without being disagreeable.”

Rev. Rivers cautioned the change would not be instantaneous: “I’m not optimistic, yes, but I’m full of faith.”