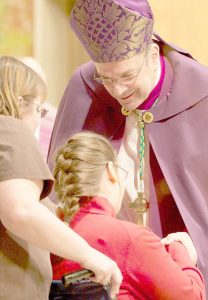 Seventy-seven catechumens and 151 candidates representing 61 parishes across the Diocese of Syracuse gathered over the weekend of Feb. 20 and 21 and shared their intentions to join the Catholic Church. This year’s Rite of Election and Call to Continuing Conversion was a little different from previous years. Bishop Robert Cunningham presided over both the Saturday and Sunday events which were held at the Cathedral of the Immaculate Conception. This was the first time all four regions came to the Cathedral for the rite, and it was Bishop Cunningham’s first time to preside over the Rite of Election and Call to Continuing Conversion in the Syracuse Diocese. Bishop Cunningham said it made sense to welcome the faithful into the church at the diocese’s mother church, the Cathedral.

Father Joseph Scardella, director of the Office of Ministerial Formation & Liturgy and RCIA, said he had already gotten much positive feedback regarding the new location. Father Scardella, along with Sister Lois Barton, CSJ, served as master of ceremonies.

Bishop Cunningham said after the rite that he felt it was important for the candidates and catechumens to come to the Mother Church, the Cathedral, to experience their initiation into the church. The decision to participate fully in the sacraments and life of the church is a life-changing decision and one important enough to warrant being at the Cathedral of the diocese. His homily was one of welcome and of explanation of Jesus and his human temptations.

“The temptation narrative is a dramatic story of how the devil tries to make inroads into each of our lives,” Bishop Cunningham said. “All of us are tempted. We will not overcome temptation every time we encounter it, for we are not perfect as Christ is. With His help and grace, however, and our consistent efforts to put aside those things which we know are contrary to God’s plan, we can succeed and one day enjoy everlasting life.”

Catechumens, those who have not been baptized yet, and candidates, those already baptized, came forward individually as their names were called each representing their parish. They were recognized along with either their godparents or sponsors. Another positive addition for the soon-to-be-members of the church was that Bishop Cunningham greeted each of them, personally welcoming them into the Catholic Church.

“We are here with you today, your family, your friends, your priests, to keep you company on this journey, to lift you if you should stumble, to walk with you along the way to your reception into the church and full participation in her sacramental life,” the bishop told them during his homily.

Many candidates and catechumens were supported by the RCIA facilitators from their parishes and in many cases, that person is their pastor. Father Joseph Zareski, pastor of St. John the Evangelist Church in New Hartford, brought candidates David Nunn and Julia Garrabrant with him to the Cathedral. Their sponsors were unable to attend so Father Zareski presented the two of them to the bishop.  For David and Julie, the day was another important step on their journey to full membership of the church.

Nunn is originally from Virginia and had lived in Georgia before moving to the New Hartford area. He considered many options before deciding to become a Catholic.

“When I was working on my master’s degree I found I wanted to gain more knowledge of all religions,” Nunn explained. “Then I moved here for my job and met my friends here. They talked about their Catholicism and I liked what I was hearing. I love the depth of the Catholic religion.”

Garrabrant is a friend of Nunn’s and the fact that they are both making the decision to enter the church has made for many interesting conversations, they said.

Garrabrant was raised in the Methodist church and after her father’s death over a year ago, she said she wanted to believe he was in a better place and she wanted to learn more about what that might mean.

“We [with Nunn] decided to do this together and it has been nice to have someone to go through this with,” Garrabrant said.
Both said Father Zareski was a terrific instructor in their new faith. “He has answered all of our questions,” Garrabrant said.

Andrea Whalen, a candidate from St. Mary’s Church in Kirkwood, decided to enter the church because she felt something was missing in her life.

“I’m finding the Catholic faith exhilarating and peaceful,” Whalen said. “I’ve just had such a longing.”

Sister Lois traveled from the Southern Tier to the Rite of the Election and initially she said those in her region were not sure they would like the change of venue to the Cathedral. In retrospect, she said, the whole event took on “the air of a pilgrimage.”

“I wish that everyone could have seen the calling forth of catechumens and candidates from the perspective of the sanctuary,” Sister Lois said, “The initial tentativeness of those called, the supportive presence and presentation of the godparents and sponsors, the personal warmth and attention that was evident in Bishop Cunningham’s individual greeting to each one as they approached him and the joy on the faces as all returned to their seats was definitely worth the trip!”

MaryK Swerediuk, coordinator of the RCIA program at St. John the Baptist Church in Rome, agreed that the experience of traveling to the Cathedral and attending the Rite of Election together was a way for the group to bond as a community.

“It was wonderful that our new elect could see themselves as part of the ‘bigger church,’” Swerediuk said.

After Bishop Cunningham signed the Book of the Elect, Cathy Cornue, director of the Office of Faith Formation for the Eastern Region of the diocese, carried the book down to the altar and placed it there. Cornue also greeted everyone at the beginning of the rite. Afterwards, she said she had heard many times throughout the week that people were very happy about the new location for the rite.

“Bishop Cunningham’s warm, personal attention to each and every person was pure gift,” Cornue said. “The elect and the candidates, as well as their sponsors, were excited and thrilled to meet the bishop and to celebrate at our Cathedral. I’ve heard from a number of people, both on that day and during the week, that it was a beautiful and moving event.”

The Lenten season culminates with Easter and the entrance of the candidates and catechumens into the church. Bishop Cunningham told them that Lent offers a new beginning.

“This first Lenten journey will end, not in the final destination, but in the feast of new beginnings — baptism, confirmation and Holy Eucharist,” Bishop Cunningham said. “As you continue this journey of faith, all of us who are here today look forward to the day when you will be one with us at the table of the Lord.”